Major Arcana of the Tarot - Part XII
The Hanged Man 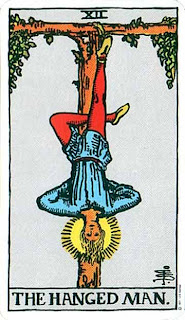 The twelfth card of the Major Arcana, The Hanged Man, is a metaphor for the turning points in life. This is a time of suspension where a new viewpoint is needed. You might be at a crossroads, one with only two options before you. You may have the urge to "do something" but have no idea what it is. The Hanged Man is telling you to stop and assess the situation. Perhaps you need to let go of an outdated attitude. Take the time to stop and relax.

If you look at the Hanged Man you can see that although he's suspended from a tree, the expression on his face is peaceful. His body and mind are in a state of focused surrender to the flow of the world around him. There are no expectations. By suspending ourselves we can gain the perspective we need to identify the things we're clinging to that impede our progress.

In the earliest tarot decks this card is called Lo Impichato (The Hanged Man), but he is referred to in Italian as Il Traditore (The Traitor). Hanging a man by his feet was a particularly painful and humiliating punishment, reserved for traitors in Italy.

The Visconti-Sforza Tarot shows a young man hanging upside-down from gallows that are set up in the form of a doorway. His feet are crossed and his hands are tied behind his back. The Rosenwald deck shows a man hanging from a horizontal pole held upright by two vertical posts. Again, his feet are crossed, but he is holding a bag of money in each hand.

In the Mythic Tarot deck, The Hanged Man is represented by Prometheus, the titan who is credited with gifting fire to mankind and in turn was bound to a rock by Zeus and had his liver eaten by an eagle each day. The Hanged Man is also said to be a representation of the Norse god Odin, who hung upside down for nine days from the world-tree Yggdrasil.

In the Rider-Waite Tarot, the card shows a man hanging upside down from a tree. He dangles by his left leg, which symbolizes higher awareness, and his right leg crosses behind the left at a right angle, representing a cross-roads. The tree he's suspended from is shaped like a Tau cross, and has leaves on it, showing that it's a live tree. This is the World Tree, rooted in the underworld and supporting the heavens.

The Hanged Man's leggings are red, the colour of fire, and represent human passion and the physical body. His tunic is blue, the colour of water, representing knowledge. Taken together, his clothing represents balance, while his yellow shoes represent his high ideals.

The peaceful expression on his face shows that he is not suffering - it is to be believed that he is hanging on the tree of his own free will. Around his head is a bright yellow halo showing his spiritual attainment, gaining higher awareness and insight.

The chief lesson of the Hanged man is that we move forward by standing still, we control by letting go. This is a card of suspension, not life or death. It's not just a card of rest, it means a new way of seeing things that often leads to new insights or enlightenment.

The Hanged Man is an unsettling card because it symbolizes a paradox - something that appears contradictory, yet is true. Greater wisdom and happiness are accessible, but only if you're prepared to sacrifice something in return. This sacrifice might be something physical, but most often it's emotional, such as letting go of a fantasy or dream you hold dear.

In a reading it suggests that the best approach to a problem is not always the most obvious. When we want to act, that's the time we should wait. You might be better off if you can stall any decision making at this time. Buy yourself time for reflection. The Hanged man is all about suspension and waiting in order to allow new possibilities to arise.

This card can also sometimes indicate that you're feeling stuck or limited in your life. You need to discover why you're feeling this way in order to release yourself from these restrictions. Perhaps you need an emotional release, or to open yourself up to new experiences. The fact that the man hanging from the tree is upside down shows the need for you to look at yourself from an entirely new perspective. Your life is not in a rut, merely in suspension until you recognize what it is you need to do.

The Hanged Man in the past position shows that the situation you find yourself in now began with a letting go of some reward in the past. You are where you are not because of a decision to let go of things or let things settle by themselves. When it appears in the present position it is most often a warning for you to avoid conflict. Someone is spoiling for a fight and the best way to defeat them is to not engage in the battle in the first place. In the future position, The Hanged Man is a warning of a conflict to come. The best victories are the battles that are avoided while the enemy destroys himself.