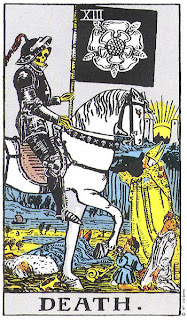 The thirteenth card of the Major Arcana is Death. Here we see our greatest fear. We shrink away from the Death card because of what we think it represents. But this card does not embody physical death, merely a transition into a new state. It can indicate endings, changes and all sorts of transitions, or it can simply show that it is time to let go of the past and move on.

Transition can be difficult for some people - the death of the old to make way for the new. The more accepting you are of the changes you will be going through at this time, the easier it will be for you. You may need to let go of a self-limiting belief or attitude. The energy surrounding you is not just change and destruction; it is change and destruction followed by rebirth. One door is closing, but another is opening.

The Death card commonly depicts a skeleton riding a horse. The image can be referenced to the revelation of Saint John: 6:8
And I looked, and behold a pale horse: and his name that sat on him was Death, and Hell followed with him.

In the Rosenwald deck the card shows a robed skeleton that clasps a scythe and rides a horse, trampling two lifeless bodies in the process, while in the Marseille deck the card has no title and was called L'Arcane Sans Nom (the Arcanum with no Name). In the Grimaud deck, the skeleton is missing his left foot and his spine resembles an ear of wheat or a vine.

In the Rider-Waite deck, Death is portrayed as a skeleton because the skeletal bones are the part of the body that survives death. The armour he is wearing indicates that he is invincible - no-one has yet triumphed over Death. The horse Death rides is white, the colour of purity, indicating that Death is the ultimate purifier. The banner he carries is black, indicating an absence of light, but it has a white rose emblazoned on it, signifying immortality, beauty and purification. The number thirteen represents the thirteen moons in a year.

A king is shown lying on the ground, a reminder that Death takes us all equally. A bishop appears to be paying homage to him, faith in the face of death, while a maiden seems distraught, representing the sorrow and pain that often accompanies death. There is even a child, proving that Death does not discriminate between age, race or gender.

The neutral gray of the sky in the background shows Death's impartiality. The sun of immortality shines between two pillars on the horizon. The sun sets, or dies, each evening only to be reborn again as it rises each morning. There is a boat on the water which is the ferry that carries souls across the River Styx. The water itself shows that life will go on - the water reaches the sea, rises to the clouds, and falls again as rain in a continuous cycle.

Death is our greatest fear since it is the greatest unknown. But our minds and spirits die continuously, shedding old beliefs and acquiring new ones, making this a card of transformation. When the Death card appears it means that big changes are heading your way. Usually this refers to an old attitude or perspective that's no longer useful and you need to let go of it. Sometimes it's hard to see how much your attitudes are hurting you, and when this is true Death is your wake-up call.

Change happens for a reason, and Death does not discriminate, it's absolutely fair. Everyone is equal in the eyes of Death. This is a card of endings and new beginnings. Accept that change happens. Worrying about things will get you nowhere. Life is a cycle where nothing is destroyed, it is only transformed.

In a spread, Death represents the ending of something significant in your life that will initiate a great change. It's the end of an era; a door is being closed. But at the same time it is the beginning of something far more significant. You need to put your past behind you and get ready to embrace new opportunities and possibilities. Let go of those unhealthy attachments to pave the way to richer, more fulfilling experiences.

When Death is reversed it indicates that while you are on the verge of a major change, you are resisting that change. You may be reluctant to let go of the past or you may not know how to make the changes you need. Because of your resistance to change, your life is stagnate and you're stuck in limbo. You need to focus on what is preventing you from changing.

Death is probably best when it shows up in the past position in a spread. It indicates you've undergone a traumatic change, but it's all behind you now. This change may be the foundation on which your current situation rests.

In the present position it indicates that you are having to deal with current changes. It could be financial changes, changes within your job, or even changes in the status of a relationship. You may have to just accept these changes as inevitable and work for a happier tomorrow.

When landing in the future position, Death is an indication of the death of a close friendship or previously strong relationship. If you're secure in your job you may want to check again. Let go of past issues that are holding you back.