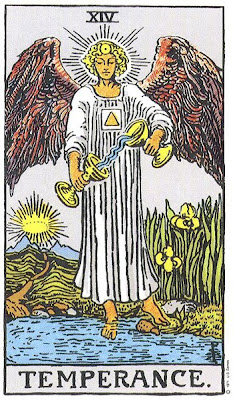 Temperance is the fourteenth card of the Major Arcana. To be temperate is to show moderation and self-restraint. This card speaks of an inner calm, your ability to weigh right from wrong, to balance good against bad. It suggests you find the middle way to find balance in relationships - friends, family, romance, work. In a world full of indulgences, finding the middle ground is not always an easy task. Think of Temperance as the eye in the heart of the hurricane.

The Rosenwald Tarot depicts a seated woman grasping two vases that are connected by a thin spout of liquid. She has some kind of polygonal halo around her head. On the Cary Sheet, Temperance is a richly dressed woman portrayed in profile. She is crowned and has a slight smile on her face as she pours the contents of a vase into a smaller goblet. Behind her is some sort of pillar, which is may part of her throne.

The Tarot de Marseille, is the first deck to show La Temperance with wings. She also has a flower in her hair and is holding two vases that are again connected by a spout of liquid. In the Thoth Tarot this card is called Art, instead of Temperance.

Temperance in the Rider-Waite deck depicts an archangel with a long, white robe, mixing the contents of two golden chalices. The angel is thought to be a hermaphrodite (the child of Hermes and Aphrodite), showing a balance between the genders. The angel has one foot on dry land, representative of the material world, and one foot in the water, representative of the subconscious. It also represents the need to ‘test the waters’ before jumping headfirst into unknown circumstances.

The triangle inside the square on the robe is an ancient symbol of healing, representing the female being protected by natural law. In the angel's hands are two golden chalices. These represent the sub-conscious and super-conscious mind and our emotional attachments. The water flowing between the chalices is actually going from the lower one to the higher one, signifying the rise from a lower plane to a higher one and finding the right balance between two sides.

In the angel's hair is the symbol of the sun and in the background of the card there is also a sun with a crown concealed within it. The red wings of the angel represent blood, life, and the soul which transcends death. The flowers are irises, representing the goddess Iris, personification of the rainbow and goddess of both sea and sky.

Temperance can represent a need for moderation or balance in your life. If you're in the middle of a conflict then you would be well advised to look for ways to compromise and cooperate. Perhaps there will be an opportunity to bring the rival parties together. To temper can mean to modify by adding a new component. By mixing and recombining, the ideal mixture or solution can be reached.

You have thus far been able to take the middle road, avoiding extremes and maintaining a balance in your life. You've learned to keep calm in the face of stressful situations. Don't let things get to you - you've found a place of peace. Your achievement of balance will help you experience fulfillment in your life as long as your temperament remains well balanced.

Rather than rushing into things, you're taking your time to ensure that you do the best job you can. You have a clear, long-term vision of what you want to achieve. You're at peace with what you're doing and it's all starting to come together. The perspective you have on your current situation is very balanced and you're in the perfect position to make the right choices.

When Temperance appears in a Tarot spread it may be suggesting that moderation is required in some aspect of your life. It may also suggest balance in the form of some kind of compromise needs to be reached. If you're having trouble with the blending of a situation - family, friends, a belief system - don't give up. Keep trying and making adjustments until you find the right mix.

In reverse, Temperance indicates that although you may have been putting on a brave face over a situation, the cracks are beginning to show. This can be a good thing. It's only once others can see our vulnerability that we're able to seek the help we need.

In the past position, Temperance shows there is a foundation of calm surrounding you. It could be due to something in your recent past when you showed a great deal of integrity and character in a tempting situation, or it could go all the way back to your childhood, which was the basis for your inner peace.

If you are going through a legal struggle, a good place for Temperance to appear is the present. You will find common ground in a dispute and moving forward things will be equitable. If you abandon your extreme positions you will be much happier. Replace the stubborn side of your character with tolerance.

The best position for Temperance in a spread is in the future position. If you're currently ill, it's telling you that physical health and stamina are on their way. And no matter how much you've struggled in the past or how bad things are now, this card is a promise things will get better.