Major Arcana of the Tarot - Part XV
The Devil 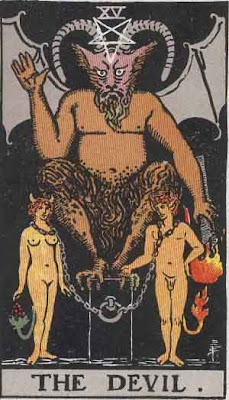 Card number fifteen of the Major Arcana is The Devil, a card about bondage, but often this bondage is metaphorical. You need to look beyond superficial appearances to get to the deeper truth of a situation. Be honest with yourself. What is it that you desire? That gives you pleasure? What is it that has power over you and will enslave you if you let it?

It is a warning against the destructive consequences when your actions are motivated by greed, lust and power. It's a belief or idea that's preventing you from growing as a person. However, The Devil can also be a sign that you are aware of your weaknesses and addictions, which is the first step to gaining control over them. There's still time to change the course you're on. You always have options, not matter what your situation. It's up to you to free yourself from whatever restrictions are holding you back.

The Rosenwald Deck shows the devil as a man with horns and clawed feet, wearing an animal skin. He holds a trident with both hands and is friendly-looking. The Cary Deck, however, portrays the devil as a cruel, horned creature. He is shown piercing the body of a naked human with his trident, and has other humans in a basket that he's carrying on his back.

In the Tarot de Marseille, Le Diable is shown as an antlered being with the wings of a bat and clawed feet. He has breasts as well as a penis. There is a blade or torch in his left hand and he's shown standing on a block of some kind. There is a mouth on his belly and eyes on his knees, and he appears to be cross-eyed. There are two humans standing on either side of him, both with antlers and tails, and they're tied to the pedestal with a rope.

In the Rider-Waite deck this is one of the darkest cards because there's so much black on it. A sinister creature with curved horns, large bat-wings and clawed feet is perched on a pedestal. He has a reversed pentagram on his head. The symbol for Saturn is carved into the palm of his right hand and he's holding an inverted torch in his left. A naked man and woman stand on either side of the pedestal. The man has a tail that ends in fire while the woman's tail ends in fruit. Both have small horns on their heads and they're chained to the pedestal in such a way that they could get loose if they wanted to.

When added together, the number 15 equals 6, which corresponds to The Lovers. Here the lovers are chained, in bondage to the material and sensual sides of their nature. Their horns and tails show that they are partially transformed into creatures of the underworld, but the chains are loose. They could escape if they wanted to and The Devil's torch can light the way out. But they choose to stay in bondage, of their own free will.

While most cards in the Tarot urge balance, unity and restraint, The Devil is a card representing the extremes, excess and loss of control. At its worst it is the card of the addict, the obsessed stalker, someone who is enslaved or relentless. At its best it's a card about letting go, cutting loose, pursuing those extreme goals.

It's natural to have self-interest, to indulge in excesses or desire pleasure. It might even be good for us at times. But we also have to be honest about our weaknesses and addictions. Denial only makes it easier for these things to control us. It's all too easy to become bound to the power of these pleasures and excesses, and the most powerful person is the one who knows when to indulge, and when to walk away.

The Devil is an inner force within all of us. It is our fears, addictions, and other harmful impulses. He's a master of deception, making it seem as though you are bound to him. But like the figures in the card, you are free to remove the chains and be free through your own will. If you're feeling stuck or restricted in your life, you may believe you're being controlled by external forces when the truth is that you've created your own chains of imprisonment. You fear the worst, and that gives your fears a hold over you, preventing you from leading a more fulfilling life.

While The Devil can reflect actual addictions, such as alcoholism, drug-taking, excessive spending, it could also indicate that you're becoming obsessed with a particular idea or situation. Only you can break free of these addictions or negative thought patterns. You need to acknowledge them and the hold they have over you.

When The Devil shows up in the past position, it means your dealings with a domineering person or situation is over with. The chains that have been holding you down are gone. In the present, this card is a wake up call. You may be involved in something that you're not even aware of, or you could be in denial over an unhealthy situation. You're being held back by something that you willingly embraced, at least initially. But whatever it is, it's the thing that's now holding you back from realizing your potential.

If The Devil appears in the future position, it's a warning that you're setting yourself up for a fall. You're attracting users and takers, which will not help you with what you wish to accomplish. Lying to yourself in order to justify what's going on isn't going to help the situation you're in. You need to be honest and re-examine what's really important in order to move forward with confidence.

I have caught handfuls of you character thieves and I know exactly where you took your material!

I agree with Holly Marie, I too, recognize the material.