metaphysics ~ study of principles of nature and thought

Got snow? We sure do. Here's the view from my dining room of our deck: 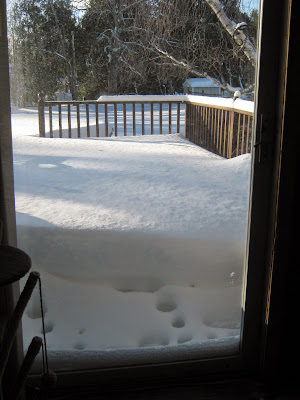 And we're supposed to get another snow dump tomorrow. But I'm not too worried because they're predicting it ahead of time, and it seems when they do that we don't get nearly the snow they say we are. Like, yesterday we were supposed to get a couple of inches and we barely got enough to have to brush off the car.

Of course the snow could be worse, I could live in New Brunswick where my sister is. She and her hubby went on a three week cruise down south and came home to eight feet of snow on their car. Eight feet!

My big concern is what happens to all that snow come spring? Normally it snows and then gets a little milder and the snow compacts or goes away completely and then we get more snow and repeat the process. This year the snow's not going away between blizzards. It's just stacking up.

A friend brought up a scary thought about it the other day - what happens if the weather suddenly gets mild and then we get several days of rain? I can't even begin to imagine the flooding that would result.

So last week was kind of a bust as far as getting things done went. A friend kidnapped me and took me to a nearby city for lunch on Tuesday, and by Tuesday evening I was sick as a dog. Was it something I ate? An IBS attack? The flu bug that's going around? Who knows. All I know is it took me until Friday before I was feeling okay again.

But good news! I found the cord for my camera that allows me to download pictures to my lap top. So here's one of the pictures I wanted to share a couple of weeks ago: 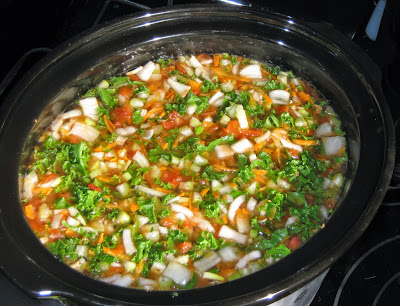 Doesn't it look yummy? It's minestrone soup with barley instead of pasta and kale instead of spinach. Incredibly healthy, yet tasty too. Pair it up with some garlic bread and you've got yourself a meal: 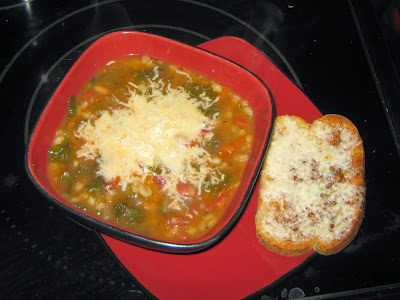 Speaking of soup . . . yesterday I started a huge pot of turkey soup. I had two turkey carcasses, one of which was from the turkey we had at the family Christmas dinner and it was huge. I probably could have used it by itself, but I already had the other (much smaller one) ready to go. So I boiled the bones for a few hours, and then, because my soup pot is so big, I strained the broth through a colander into my roasting pan. However, the soup pot fits into my fridge easier, so then I poured it from the roasting pan back into the pot, scalding my left hand in the process.

Somehow a fitting end to a long week. Let's hope I have better luck with my week this week. :-D