For anyone who's new, you can catch the previous weeks here:
Week 1, Week 2, Week 3

As fun as it is to wreck a journal, it's also a little time consuming. So I only managed three pages this week.

First I was instructed to trace my toes. Sounded simple enough, but I found it really hard to get the pen between my baby toes. And then I wanted to be a little more creative, but it didn't turn out exactly the way I wanted. 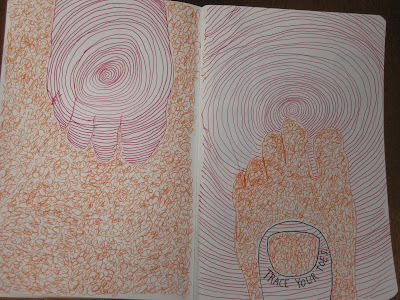 The next page I did, I was instructed to do some rubbings with a pencil. It didn't specify that it had to be a lead pencil, so I used pencil crayons instead. The first thing I learned was, the pages of this journal are a little too thick to use for effective rubbings. Had I been thinking clearly, I would have used a lighter weight paper and then glued it into the book. Oh well.

The purple rubbing is of carved box I have on my dresser. While you can definitely see that it's a rubbing, the thickness of the paper makes the image a little hard to make out. It's supposed to be two dragons facing each other, but it doesn't really show up well in the rubbing. The dragons are a little hard to make out on the box itself, so it's no wonder it didn't translate well.

The other rubbing I did using a small candy tin I have on one of my bookcases that's full of white sand from a beach in the Bahamas. You can sort of make out the ship from it. The water below it turned out really well. For that I rubbed over the scales of one of my dragons. It was a little awkward, but it worked. 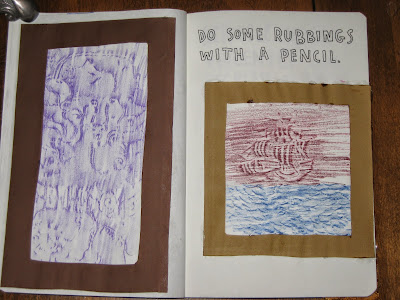 And finally, I was instructed to drip something on the page and then close the book to make a print. I decided paint would make the best print, and I dribbled a pretty design but apparently I was a little heavy handed on the metallic paint because it turned out a little blobby. 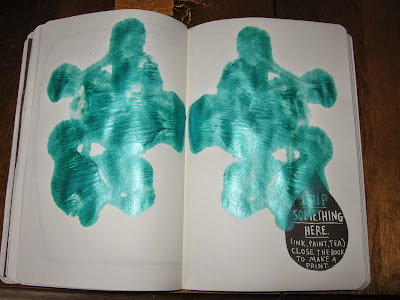 Once again, hindsight is 20/20. I should have added another colour or two to spiff it up.

That's it for this week. Join me next week as I continue to wreck my journal. :-D

Email ThisBlogThis!Share to TwitterShare to FacebookShare to Pinterest
Labels: fun with journals, wreck this journal

Carol, I am enjoying the Wreck My Journal project so very much. I think that your activities have been wonderful. Thank you for sharing them. Hugs, Ardee-ann

Are these exercises from The Artist's Way?

No, they're just me having fun as I wreck my journal. You can click on the link for Week 1 to see what it's all about. :-D

An amazing testimony on a spell caster who brought my husband back to me.. My name is Olivia Phimzile,i live in Kansas,USA,and I'm happily married to a lovely and caring husband ,with two kids.A very big problem occurred in my family seven months ago,between me and my husband .so terrible that he took the case to court for a divorce.he said that he never wanted to stay with me again,and that he didn't love me anymore.So he packed out of the house and made me and my children passed through severe pain. I tried all my possible means to get him back,after much begging,but all to no avail.and he confirmed it that he has made his decision,and he never wanted to see me again. So on one evening,as i was coming back from work,i met an old friend of mine who asked of my husband .So i explained every thing to him,so he told me that the only way i can get my husband back,is to visit a spell caster,because it has really worked for him too.So i never believed in spell,but i had no other choice,than to follow his advice. Then he gave me the email address of the spell caster whom he visited.{tanasiajobs210@gmail.com}. So the next morning,i sent a mail to the address he gave to me,and the spell caster assured me that i will get my husband back the next day.What an amazing statement!! I never believed,so she spoke with me,and told me everything that i need to do. Then the next morning, So surprisingly, my husband who didn't call me for the past seven {7}months,gave me a call to inform me that he was coming back.So Amazing!! So that was how he came back that same day,with lots of love and joy,and he apologized for his mistake,and for the pain he caused me and my children. Then from that day,our relationship was now stronger than how it were before,by the help of a spell caster. So, i will advice you out there to kindly visit the same email tanasiajobs210@gmail.com,if you are in any condition like this,or you have any problem related to "bringing your ex back. So thanks to the Dr Tansia for bringing back my husband ,and brought great joy to my family once again. {tanasiajobs210@gmail.com}, Thanks

Hello i am Jacqueline Ashley ,from Canada, I am out here to spreed this good news to the entire world on how i got my ex lover back.I was going crazy when my lover left me for another girl last month,But when i meet a friend that introduce me to Dr Etiosa the great messenger to the oracle that he serve,I narrated my problem to Dr Etiosa about how my ex lover left me and also how i needed to get a job in a very big company.He only said to me that i have come to the right place were i will be getting my heart desire without any side effect.He told me what i need to do,After it was been done,In the next 2 days,My lover called me on the phone and was saying sorry for living me before now and also in the next one week after my lover called me to be pleading for forgiveness,I was called for interview in my desired company were i needed to work as the managing director..I am so happy and overwhelmed that i have to tell this to the entire world to contact Dr Etiosa at the following email address and get all your problem solve..No problem is too big for him to solve..Contact him direct on: DRETIOSA@YAHOO.COM and get your problems solve like me..