Why yes, I did go see Maleficent last week. How did you guess? LOL And it was excellent, in case you were wondering. If you haven't seen it yet, you really should - Angelina Jolie was awesome.

So . . . remember how a couple of weeks ago I figured out the layout for my hexagon afghan? Well last week I started crocheting them together with a granny stitch. Rounds one through four went together perfectly, but when I got to round five I made it halfway around and realized I was somehow short a pair of hexagons. This didn't make sense. I consulted the picture I took last week and started counting and my count was correct. So then I tied the remaining hexagons in place but sure enough, there was a gap.

Not being one to believe my own eyes, I untied the hexes again and laid out everything on the dining room table figuring that maybe I needed to lay it flat before tying the hexes back on again. Again I had a gap. I might mention that at this point it was Friday the 13th.

Once again I untied the hexes and deciding I must have inadvertently messed up the ones that were crocheted in place, I removed them too. This involved much cursing and swearing because I'm working with black yarn and I tucked all the ends in and my eyes aren't so great anymore. Several hours later I was back to just the four rows crocheted together and once again I tried tying the fifth row in place. And once again I had a gap. Only this time I realized what the problem was: 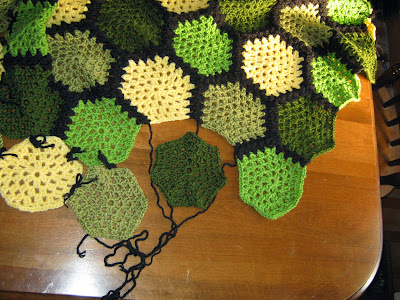 Can you see what it is from the picture? This picture was taken after I teased, cut, and cursed the offending medallion out of the line-up. One of my hexagons had seven sides.

This afghan is now officially known as my Friday the 13th afghan. And here's a picture of it with row 5 tied back in place. Notice how it all fits perfectly now: 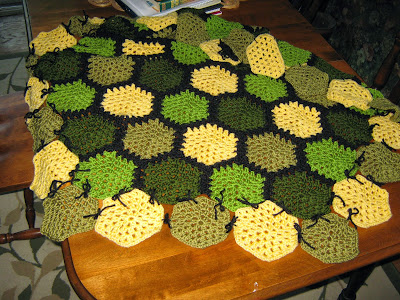 And remember my little squirrel buddy? Well, apparently he thinks I'm too slow when it comes to putting out the peanuts for him, so he's taken to "encouraging" me to move faster: 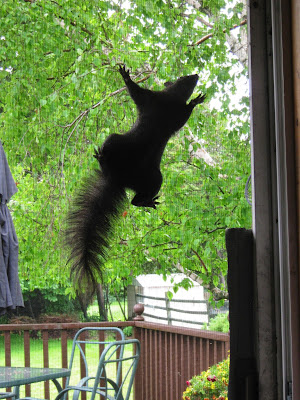 Yes, that's the screen for the deck door he's hanging off of. And yes, I yelled at him. Once I even threw a box of crackers at him. And no, he does not get peanuts when he climbs the screen.

The book nook is about 90% finished, to the point where I can start loading it up with books. I still need the bottom shelf before I can make the padding for the bench part, and I'll need a couple of throw cushions for my back, but it's usable. So you can look for the progress report on it Wednesday.

The Great Book Migration has begun; the nook will be holding all of my science fiction and fantasy books, both paperback and hardback. And so begins the arduous task of putting them in alphabetical order, and I fully intend to enter them into a database or spreadsheet as I go along. There's two reasons for this: first, I have a great many different series of books and it would be nice to know if there are any gaps in these series and which books I need to fill them up (and also whether or not I have a book by a specific author); and second, I love my books, they're important to me, and if we ever had a fire I'd want to replace them wherever possible. So once my book database is complete, I'll be giving a copy of it to the hubby to keep at his office.

And if all that isn't enough for you, Monday I went on a road trip and was shown an awesome used bookstore within easy driving distance, and Thursday I mastered the art of sewing a rolled hem on chiffon.