Once upon a time there was a crazy person who shouldn't be allowed in dollar stores unsupervised. I don't know what she went in for originally, but she came home with this little paper cup that held a peat pellet and three gourd seeds. The idea was to re-hydrate the peat pellet, stick the seeds in it, and the seeds would grow. Much to the woman's surprise, that's what happened. 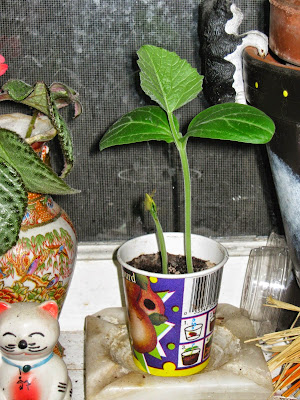 The above picture is what the seedling looked like the last time we saw it. Since then it has been watered regularly (as have all my plants, I'm happy to report) and it started growing like crazy. I even had to transplant it into a new pot. And here's what it looks like today: 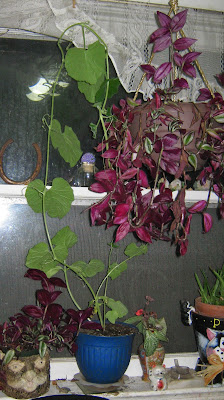 I probably could have got a better shot of it if I'd taken it off the window ledge, but not only was it growing behind the valance, it was attaching itself to the valance, as well as the wandering jew hanging beside it. I know it can't stay in the window forever, so I'm going to find it a bigger pot and a trellis.

Now I know what you're thinking. You're thinking "why the heck doesn't she stick it outside where it belongs?" Fair question. It's because if I put it outside I'll forget to water it and then the little forest creatures will get it and I really want a gourd or two. We have pretty aggressive garden raiding forest creatures - just ask my neighbour with the huge garden - and I'm pretty sure they won't be able to resist the buds or budding gourds on my plant.

But wait, you say. If you have the plant inside, how are the bees going to be able to pollinate it for you? Yeah, that might be a problem. But I will cross that bridge when I come to it. I have a couple of options. I can try pollinating it myself - oh, c'mon. It's not that hard. Or I can stick it outside during the day and keep a sharp eye out for forest creatures. Think of it as a grown-up science experiment.

Okay. I also promised on Monday that I'd post pictures of the gardens I planted on the weekend. So here we go. First we have the front garden that took me three hours. Sorry the picture turned out so bright, but I took it on one of the few days we've had sun. At least it gives you an idea of the size of the garden.

I usually plant petunias in the front garden because they're bright and cheery and pretty low maintenance. All you have to do is dead head (pinch off the dead flowers) them every couple of days and they'll bloom all summer. Usually I have a few different colours in there, but this year I decided to go monochrome, which was just as well because we were late getting plants and pretty much all that was left was the pink.

On the deck we have the pedestal planter which you can't tell from the picture but is kinda falling apart. The hubby figures this will be the last year for it. And it actually has a formerly hanging plant in it, a multi-coloured profusion of miniature petunias that apparently don't need to be dead-headed to keep blooming. And in the planter below that, you can see the miniature rose I got from the bowling banquet in May. It really loves it outside and has started to get new buds on it. 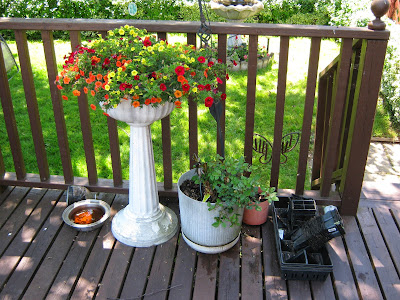 Oh! And looking at this picture I just realized that there's something missing. I had a group of four, solar powered dragonflies that I had sitting in these planters last year. I wonder where they disappeared to?

Next we have Kelsey Park, so named for our border collie who's buried beneath the fountain. Again, the picture isn't the best because of the dappling effect of the light, but you get the idea. There are four different kinds of flowers, but the only one I can name are the snapdragons, which we have in memory of our kitty Panda, whose also buried in Kelsey Park. I'm not exactly sure why we have to have snapdragons for her, but the hubby insists. He also insisted on the small flowers around the edge of the garden because they looked like dice. 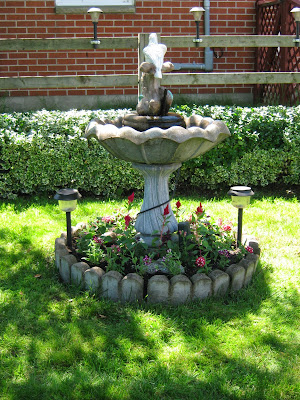 And finally we have the planter on the patio, that I pretty much filled with all the leftover plants. We'd bought three flats of petunias for the front, which I realized once I got going was about one flat too many. I managed to get two and a half in there and the rest are crowded together in the patio planter, along with the extra tall red tufted plants, a couple of snapdragons, and one of the smaller purpley plants. Oddly enough, I had no leftover dice plants. 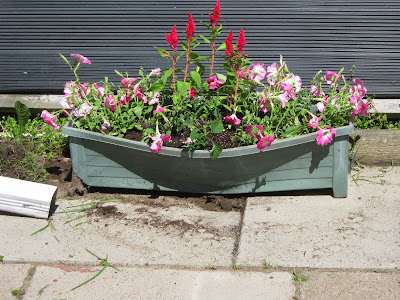 And there you have it. My gardens for 2014. I didn't add any plants to the pond garden as I'm hoping the plants I put in there last year will spread a little more. No pictures of it 'cause it needs to be weeded. :-) And my long skinny rose garden isn't really doing much yet, although there are a few buds on the plants.

My houseplants are much happier since my spat of indoor gardening a couple of months ago. It's amazing what regular watering will do for them. My pineapple plant is growing, my aloe plants have new growth - heck, all of my plants have new growth. I even brought the miniature orchid the hubby gave me back to life.

Once I transfer the gourd to a bigger pot I want to start a sweet potato vine. I love vines. So I will keep you posted on my progress. :-D