You know what the best thing is about the election for Canada's new Prime Minister today? It means an end to the endless phone calls, knocks on the door, and over abundance of commercials of people all trying to me how I should vote. At one point I felt like telling the last earnest young man who interrupted my work day that I'd vote for the first candidate who'd stop sending people to harass me.

The weather has turned cold and the leaves have started to change their colour, finally. Don't blink or you might miss it. I have the feeling before we know it we're going to be looking at naked trees out there.

And, of course, this is the time of year when you need a jacket with a thermostat so the warmth it provides can be adjusted throughout the day. My jean jacket or heavy hoodie are all right for day time, but this morning I broke out the winter jacket to go to the gym. I also went out and started the car before feeding the cats. It didn't impress them much, but it was nice not to have to scrape the frost off the car.

I was able to cut apple mountain in half yesterday - I've only got two bags and a small basket of apples left to deal with. I started with apple/oatmeal pancakes. I normally make pancakes from scratch and I adapted my recipe to include both oatmeal and apples. Man were they good (if I do say so myself)! With the leftover batter (hubby doesn't eat anything apple) I made a bunch of little ones for the granddaughter and she really liked them too.

On Saturday, one of the ladies at my gym was talking about these caramel apple tarts she made, and they sounded so easy that I got some tart tins and gave it a try. The two I sampled tasted so good that I broke down and made an oatmeal pie crust and made half a dozen pot pie size caramel apple tarts, as well as a pie. That was a lot of peeling and chopping (as my back was telling me), but it was worth it. 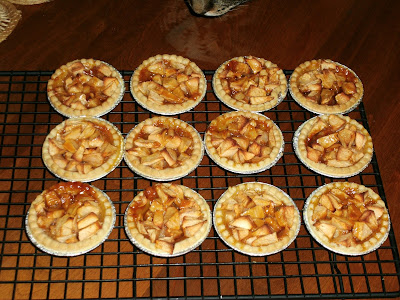 I still don't have any apple muffins made yet, nor can I find my meat pie tins I bought to make single serving apple crisps. And I still have raspberries in the fridge that have to be used up. And the hubby mentioned he wouldn't be offended if I made him a cookie or two. ;-)

Good thing this is a great time of year for baking, eh?

Thanksgiving ~ a national holiday celebrated primarily in the United States and Canada as a day of giving thanks for the blessing of the harvest and of the preceding year.

Happy Thanksgiving to all my Canadian friends and Happy Columbus Day to all my American friends! I hope wherever you are, you're enjoying the abundance of harvest time.

As you know, normally I write my Monday post on Sunday night. But quite frankly, Sunday night I was in a food coma. I could barely keep my eyes open, let alone write anything. :-) 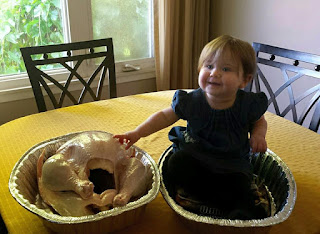 What makes this picture even funnier is the way her mother was freaking out in the background because Ellie kept wanting to touch the turkey. My daughter has a phobia about touching raw meat, which was why I was there on Saturday to stuff her turkey for her.

Today is also the day of my daughter's birth, and from the day she first discovered cheesecake, that has been her birthday cake of choice. Traditionally it was always a peanut butter cheesecake, but the last few years she's branched out a bit in her choices of flavour. This year she asked for chocolate. Being the overachiever in the cooking department I am, I couldn't just throw some chocolate into a regular cheesecake recipe. No, I had to get a little fancier than that: 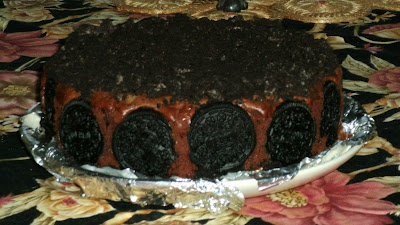 As well as the Oreo cookies embedded in the outside, the crust on both the bottom and the top is made from crushed Oreos as well. An entire bag went into the outside. Well, minus the two cookies I ate. ;-)

The filling was made from chocolate cream cheese with some cocoa powder added. And then at the last minute I threw in some chocolate chips, which melted into the cake instead of retaining their shape like they do in cookies or regular cakes. To say the result was decadently chocolatey would be an understatement. The cookies around the outside were a good idea, they provided a serving guide - one cookie width made the perfect serving size.

Thank goodness the rest of it went home with the daughter. :-D

But don't despair, I still have half a pumpkin pie, three-quarters of an apple pie, and a fridge threatening to burst with leftovers.

A surfeit of thanksgiving indeed!

September was not a kind month to me. I'm crossing my fingers that October will be better but it's too soon to get my hopes up so we'll have to wait and see.

Hard to believe, but I survived my five days without the internet. Actually, it wasn't as bad as it seemed at the time. Once I got over my initial shock/rage/angst dare I say it was a little freeing?

I could still write, but without distractions (game, Facebook, email). I found I had time for other things, like reading and ... gulp ... housework. I even did some baking. The only two things I really missed was access to my email, and being able to go to the Cogeco grid to see what was on TV.

As you know, I look after my granddaughter in the afternoons, and since I had the whole eight hour time frame going on waiting for the repairman, she had to come here. And of course the repairman came just as I had her ready to be fed so in that respect it was a bit of a debacle, but the main thing is the internet is fixed and I'm online again. :-D

It's apple season! Apples are a main crop around here - many orchards, two really big ones. I bought apples a week ago, thinking to make some apple muffins or apple bread or something, and since then I've been given three bags of apples from people with apple trees. Apparently there's a bumper crop this year. Time to get baking!

So one of the other things apple season means is an influx of migrant workers. One of the big orchards imports workers from Mexico, and the other imports from Jamaica. I remember when I worked the service desk in retail dreaded Friday nights in the fall. That's when the workers got paid, and their first stop was our store because the manager would allow them to cash their cheques there.

Ironically, despite the fact we were a grocery store, they did very little shopping with us, preferring to save their money for the discount grocery store across town. But they did use our Western Union service to send money to their families back home.

This was back in the days when we had to phone each and every transaction in. If you were lucky you got a hold of a Western Union agent who'd let you do multiple transactions without having to redial for each one and if you were really lucky, there'd be a second person working the desk to help check the forms and take the money.

It's been a long time since I've worked it that place. Time keeps changing and I'm sure everything is automated now. The workers probably all have direct deposit allowing them to cut out the Western Union middle man completely.

The migrant workers are here, the leaves are starting to turn, and it's become cold enough that I actually have the heat turned on.

Can winter be far away?