Any online shoppers out there? I don’t know about anyone else, but I find online shopping pretty hit or miss.

The daughter buys a lot of her clothes on-line, mainly from Old Navy where she knows how their clothing fits. I’ve tried buying clothes a few times from a couple of different companies and it’s really a crap shoot, whether they’re too big, too small, or just right. There’s one online store I’d love to buy clothes from, but it’s a little too pricy for me to be willing to take the chance on the size being right.

The same goes for jewellery. I’ve purchased several necklaces and earrings, and for the most part I’ve been satisfied, but there were a couple of times the workmanship was not exactly stellar. Buyer beware – you get what you pay for.

Then there was my attempt to buy a lap top from Lenovo. If you missed that rant, count yourself lucky. Let’s just say it was not a happy experience and I did not end up with a lap top from them. However, the camera I purchased online from Maple Leaf Photo was awesome.

I wasted a considerable amount of time yesterday afternoon trying to decide on a blanket to order online. It’s a dragonfly blanket, a little pricy, and there were several to choose from. I finally made my selection and now I get to cross my fingers that it will turn out to be as nice as the picture. 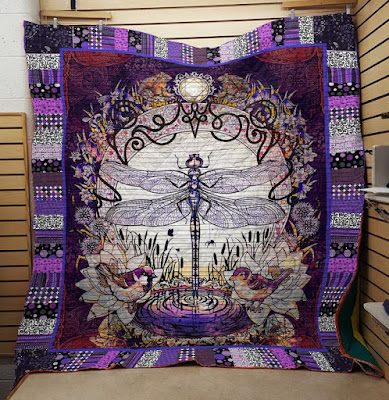 It was a full moon last night, the Sturgeon moon, and knowing it was this weekend I chose it for the topic for the phone photo challenge I’m doing. Accordingly, the hubby and I went traipsing down to the beach after dark so I could take pictures with my phone. The moon had a red glow about it that was so arresting that we went back home so I could bring my good camera to take pictures as well.

None of the photos I took will ever make it to National Geographic, and surprisingly the ones I took with the phone turned out better. I got some really great pictures of the moonlight on the water with my camera, but the moon itself looked like a cluster of three moons. I’m thinking the best way to take those pictures would have been with a tripod.

And if you’re curious about my photo challenge, you can find the blog HERE
at 8:00 AM No comments:

We live in a relatively quiet, older neighbourhood. It’s the kind with large yards and a few trees, not a lot of traffic, no curbs on the roads – there are even one or two of us who still have gravel driveways.

Anyway, partly because of this peacefulness we have a wide variety of birds. I put peanuts out for the blue jays on occasion, just often enough to encourage their visits. And if they make enough noise, I’ll bring them out some just to shut them up. The reason I don’t leave them out more often is because the nuts attract the squirrels and I don’t want a repeat of what I went through with one squirrel in particular a few years ago.

That squirrel was a scruffy individual that I felt sorry enough for that I’d leave peanuts out for him. But then he started getting greedy and impatient and he’d climb the screen on the deck door – putting holes in it I might add – because he wanted his peanuts. So I stopped feeding everyone. 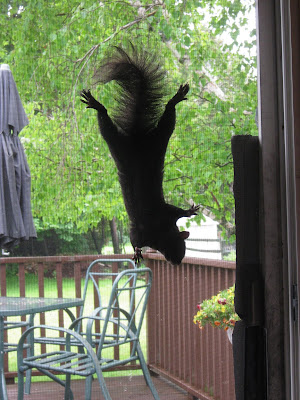 When the coyotes set up house in the neighbourhood last summer, birds were about the only other creatures we saw. But they moved on so this year we’ve had many of our other friends reappear.

I already told you about the proliferation of mice last week, but the black and grey squirrels have returned as well. We also have a bunny living under our deck, and a chipmunk who seems to have a hidey hole in the hedge somewhere.

I have a soft spot for chipmunks. They’re just so darned cute! And this one doesn’t seem particularly afraid of me. He was out on the deck this morning teasing the cats by running back and forth, and didn’t shy away when I opened the sliding door to toss him a peanut. I may have tossed him a few peanuts and then a blue jay landed in the tree that overhangs the deck to demand his fair share, so I got some more peanuts and then a dish of birdseed.

Once the peanuts were gone I expected a mess all over the table I put the seed on because the jays like to root through the bowl for the sunflower seeds and they make quite the mess. But to my surprise, one of the jays stood by patiently while the chipmunk stuffed his little cheeks full of the seed first.

Well, of course such good manners deserved a reward, so I put out more peanuts for the blue jays and that’s when the squirrels showed up to chase everyone else away. *sigh* 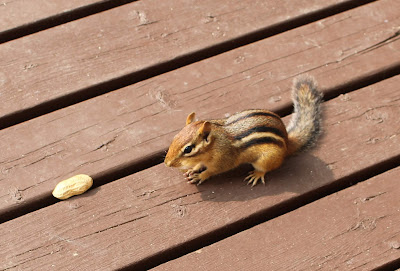 Now, here’s the amazing thing. The chipmunk put in an appearance while we were having dinner on the patio, so I got him a couple of peanuts. The grandbaby was just thrilled with how close he came. Then after dinner she started singing “Once Upon A Dream” and we noticed the chipmunk seemed fascinated. So we told her to sing to him and she did. He crept closer and closer, to within about a foot. Then a couple of birds landed in the tree over our deck.

It’s official. The grandbaby is a Disney princess. LOL

mycosis ~ disease due to the growth of a fungus

I read on the weather network website that conditions during the spring were very favourable for the breeding of mice, insects, and other such pests. I didn’t think much of it at the time, but I’m paying attention now. That and the coyotes moving on to new hunting grounds probably accounts for our current situation. 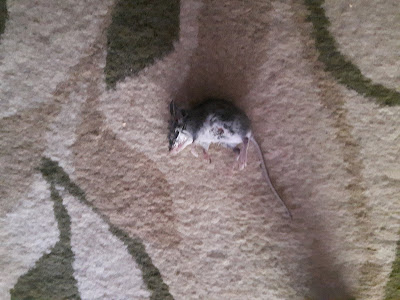 Yup, that’s right. We’ve got mice. That one was waiting for me in the dining room one morning when I got up to feed the cats (they may kill them, but they won’t stoop so low as to eat them).

We had mice a couple of years ago but the hubby put mouse bait down in the basement where the cats don’t go and that appeared to take care of the problem. The first sign we had that they were back was mouse dropping under the toaster oven. I admit I don’t think to clean under there often, but in this case we got a new one and when we moved the old one…

Even so, I was willing to believe they were old droppings, missed from our earlier mouse invasion that had been mainly confined to the junk drawer in the kitchen. But alas, such was not the case as I discovered when I opened the spice cupboard to find they’d gotten into some sunflower seeds – sunflower seed skins all over the place (as well mouse droppings).

To date, three mice have been killed in traps, two by cat, one was released back into the wild after it was caught dragging a “guaranteed to kill” trap around the kitchen, and two of those same traps have gone missing. Hubby also put more mouse bait in the basement.

It’s enough to make me miss the coyotes!

I did something last night that I haven’t done in…I can’t remember how long. I closed my bedroom window.

You have to understand what a big deal this is. I’m kind of a fresh air junkie. Even in the dead of winter I have the bedroom window cracked open, even if it’s just an inch or so. And of course in the summer time it’s not just about the fresh air, it’s also about the summer melodies – the wind shushing through the trees, crickets chirping, the odd sleepy bird calling… And let’s not forget the smells of summer – fresh cut grass, flowers blooming…

Of course you can’t hear any of the sounds of summer over the noise from the air conditioner, and I’ve developed allergies so the smells of summer have been making me stuff up more often than not. *sigh*

We got a new air conditioner for the upstairs (and spent way more for it than we were counting on). This one, however, does not fit neatly into the window. It sits on the floor, and it’s rather large, which meant the hanging basket chair on its stand had to move out of its corner at the top of the stairs.

So. I was upstairs in the guest room, rearranging chairs to try and fit the basket chair (and I cleaned out the closet and went through some of the stuff on the bookcase while I was at it) and I couldn’t help but notice the hot breeze coming in the window. So I closed it. And almost immediately I could start feeling the cool air from the new air conditioner wafting in. And then I had to take some clothes into the master bedroom and couldn’t help but notice the difference in temperature. So that window got closed too and we slept in relative comfort the rest of the night.

Now, if I could just bring myself to close the windows down the hall on the main floor maybe we could get the rest of the house to cool down a degree or two. :-)

And for those of you who are keeping track, we’re currently under a heat warning. The humidex is pushing the temperature up over 40C (105F). I’ve gone outside in the winter where the cold takes your breath away but I think this is the first time I’ve ever had the heat take it away.

But you know who likes the heat? The tomatoes. The cherry tomatoes the hubby and granddaughter planted are just covered in little green tomatoes that are just starting to turn ripe. 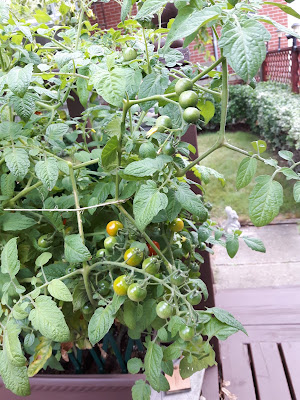 And look at the tomatoes in my neighbor’s garden – I think these are plum tomatoes and the picture just shows the tip of the iceberg where her garden is concerned: 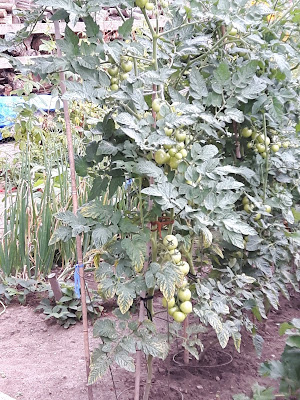 A bumper crop for sure. Salsa anyone?