maltster ~ one who makes or deals in malt 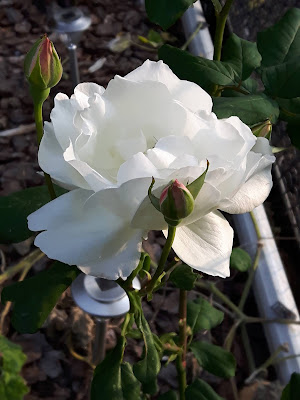 We’ve been having what I think of as the perfect summer weather (even though it’s fall now) – bright and warm during the day, cool enough to sleep without air conditioning at night. Yesterday the breeze wafting in the windows was warm enough the air conditioning kicked in.

Apparently my roses like this weather too. The picture above was taken of the white rose in my garden. Too beautiful to pick, but a picture will preserve it forever.

The basement is pretty much done. I did say the hubby tends to go full steam ahead with projects, didn’t I? The guy that was taking away our old furniture came sooner than we thought he would, so the old furniture and carpet got toted away. Good riddance!

The hubby had already started the floor, doing it in sections. First he’d treat the cement with this special stuff to get rid of any residual smell/bacteria, then he laid down this stuff called Dricore, which has moisture barrier on one side and pressboard on the other, and on top of that he laid a woodgrain laminate flooring. He finished this on the weekend.

Then yesterday we drove up to Peterborough to look at new furniture for it. He fell in love with a reclining love seat in one of the local stores, but for the main seating he had his heart set on a sectional sofa to replace the sofa and love seat we had to get rid of. Unfortunately, the way they’re making sectionals these days (with a lounge on one end) it just wouldn’t work in the space we have.

The good news is, we found a sofa and love seat that we both liked that will fit perfectly. The bad news is it’ll take 6 to 8 weeks to be delivered. *sigh*

In other news . . . I walked down to the waterfront to meet with a friend I hadn’t seen in a while. We had a lot of catching up to do and it was nice to do it while sitting in the shade and enjoying the view.

The following night I was down there again, this time to meet up with my poetry group. I’m sure we made a curious sight, sitting in a circle in the dark, flashlights going on and off as we took turns reading.

All that was missing was a camp fire and s’mores.

myosis ~ excessive contraction of the pupil of the eye

The hubby and I have officially lost our minds. But on the other hand, at least I won’t be lacking for something to talk about on my blog for the foreseeable future.

Our kitchen is small and lacking in counter/storage space, and we’ve been talking for a long time about how some day we’d have something done to fix it. Well, that some day is now. We met with a designer at Home Depot who is unable to use a shoehorn to give us more space in the kitchen, but he did have some good ideas of what/where new cupboards will work to make it more efficient.

I guess I’ve been watching too much HGTV because when I hear “kitchen reno” I think they’re going to do it all – design it, rip out the old cupboards, do the walls, put up the new cupboards. But that is not how it works, apparently. What the designer does is help you pick out the cupboards that will work in the space you have, and order them for you (as well as the countertops and any appliances you may need). Then he’ll put you in touch with the contractor to install them.

I was prepared for having to empty out all the junk from the old cupboards, in fact I’ve been looking forward to it because I figure I’ll be able to get rid of a lot of stuff we don’t use. That alone will help with the storage issue. But I didn’t figure on having to rip the old cupboards/counters out ourselves.

And we were already planning on redoing the flooring in the kitchen, which has to wait until the old cupboards are ripped out, but it never occurred to me we’d have to deal with the walls ourselves too. The old paper has to be stripped off and the walls sanded and repainted before the new cupboards can go up. Which begs the question, just how long are we going to be without cupboards??

The fridge and stove are staying where they are, but the dishwasher is being moved and the sink replaced – also something we need to take care of ourselves. The new cupboards have to be installed before the countertops, but at least the installation for the counters is included in the price of the stone.

But . . . while we’re waiting for the cupboards and counters to arrive, the hubby decided it’s time to do something about our damp, smelly, barely used basement. Which is not going to be nearly the job the kitchen is and it’s something he can do himself. 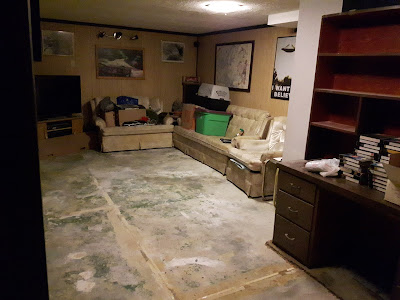 He started with ripping up the old, disgusting carpet and he’s made arrangements for someone to come and take the furniture away. The cats spent many years having a spraying war down there, so you can imagine what it smells like, despite our efforts at controlling it.

So one of the things hubby is doing is using this special stuff on the cement to kill the odor/bacteria, then he’s installing a special subfloor with vinyl flooring on top of that. The finishing touch will be new furniture.

Once the hubby sinks his teeth into a project it’s full steam ahead until it’s done – he should have the rec room done in no time at all. The kitchen however . . . well, that’s a whole other kettle of fish. 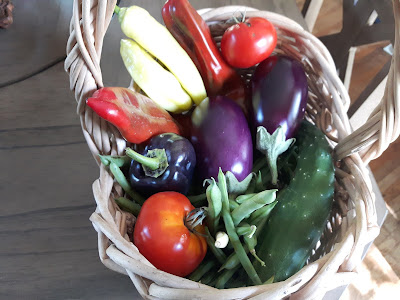 I don’t know about your garden, but mine has been pretty much a bust this year.

The beans did okay at first, but then they kind of petered out quickly. But then the weirdest thing happened. The bush beans at the front of my garden suddenly decided they were pole beans and proceeded to grow over top of the carrots, wax beans, and peas to get to the fence. And then they started producing more beans, which I didn’t catch in time so I’m letting them go to seed to plant next year.

The peas were disappointing. For all the plants we had, they didn’t produce much. I think I picked them only two or three times. And the carrots are no bigger now than they were a month ago and that’s my fault. They’re sandwiched in between the two rows of beans so I don’t think they got enough light. I’ve pulled the beans from the front row off them as much as I can but I suspect it’s too late for them to do anything.

The tomates didn’t do well at all. The cherry tomatoes on the deck weren’t bad, not great, but not bad – certainly not the bumper crop we had last year. As for the beefsteaks and Brandywines . . . well, we got a few on each plant, but they were small and what didn’t rot on the vine the bugs and squirrels got to.

Out of five pumpkin vines I got 2 small pie pumpkins. I think combined that might be enough for 1 pie. The beets looked like they were doing okay, but they’re really small. And the peppers? Well, they got off to a slow start and I’ve had a couple of respectable looking banana peppers, and one small bell pepper the colour of eggplant. There are still a few struggling, so hopefully they’re not done yet.

On the other side of the yard, the neighbour’s pole beans growing up our fence did okay. I’ve picked from my side of the fence a few times, but never more than enough for supper. And although her butternut squash took over my rose garden, I’ll have four squash for my trouble, two of which are in good enough shape to actually use. LOL

The rest of her garden was as iffy as mine, and she spends a lot more time and energy on it than I do. From what I gather, a lot of other home gardeners didn’t do so well either.

Makes you wonder what the price of food is going to be like this winter, doesn’t it? 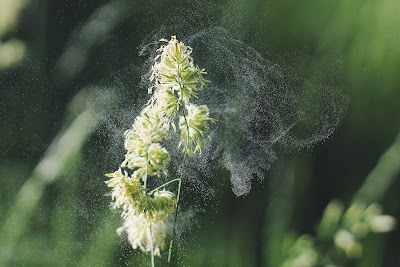 You know, I always thought allergy season was in the spring when everything started blooming, and I thought allergies were for other people not me. But I was wrong on both counts.

If you suffer from allergies, you can suffer all year ‘round (as you probably already know). The worst part is, it doesn’t matter if you’re indoors or out, there’s just no escaping it.

Winter’s the time for dust and mold allergies, and let’s not forget pet dander. The spring is when you’ll see more of the tree pollen allergies, as well as flowers and grass. Summer’s okay as far as pollen allergies, but this is when you need to watch out for fungus spores and mold. And fall is when we have the dreaded ragweed, goldenrod, and other pollen producing weed allergies.

So what brought on this sudden interest in allergies? Well, for the last few years I’ve been suffering from a lot of sinus infections and when I finally got to see a specialist about it he told me it was just allergies. His advice was to take a 24 hour allergy pill before bed at night, changing brands every month or two so I don’t get too used to one kind. After a while they tend to lose their efficiency.

So I did, and what do you know? It worked. I didn’t have one sinus cold this winter.

And then I happened to catch an episode of Mutant Weather on Cottage Life and it talked about how because the earth’s temperature is rising, it’s creating longer growing seasons, which in turn extends the pollen seasons. Global warming is also responsible for the increasingly strong winds we’ve been experiencing over the last few years. These winds increase the range of the pollen and the length of time it stays in the air.

So now you know. If you’ve been sneezing and sniffling more than usual, you’ve probably developed an allergy. But check with your doctor to be sure.