The Face of Summer

This week's picture was actually taken with my phone. What can I say? Sometimes it's a little handier than my good camera.

Wednesday I took the granddaughter down to the beach after pre-school. It was a warm and sunny day, and there was still pools of stagnant water all over the beach. But fortunately, our waterfront boasts not one but two splash pad areas. The main one has a bunch of different splash areas and it was pretty crowded. So the granddaughter asked if we could go down to the other play area and I said sure. Smart kid - there was no one using the secondary splash pad.

As you can see, she had a blast! 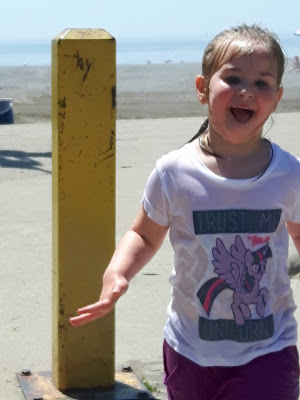 I actually had another depressing picture of our beach picked out, but then I realized today was the first day of summer. This called for something a little more summery.

The last time I was down at the waterfront I just happened to take a few pictures of the garden at the east end of the beach. Actually, what attracted me was the pink blossoms on the trees. I have no idea what kind of trees they are but they look pretty cool.

I picked this particular picture because it looks like a pretty little park garden. You have no idea what a mess the beach is just beyond it. 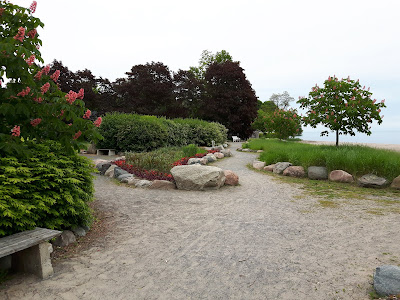 Oh the weather outside is frightful,
Closed windows are so delightful
The summer’s coming really slow
And it feels like it maybe might snow.

Seriously! It’s the middle of June – why am I not complaining about the heat and the humidity? I’m still wearing socks and shoes, and heavy jeans, and long sleeved shirts. And I’m wearing a jacket when I go out, at least in the morning.

The hubby has been wearing shorts and a tee-shirt (and freezing his butt off) while working outside, but I noticed my next door neighbor was wearing track pants and a sweat shirt while working in her garden yesterday morning. Usually at this time of year she's out there gardening in her bathing suit.

So far this month has been cold and wet and drizzly. The water has been epically high in Lake Ontario, although it was supposed to have peaked on the weekend. The beach is still mostly under water which begs the question, what’s going to happen to the Waterfront Festival?

Every year for the July 1st weekend our town throws a three day fair down along the waterfront – music, crafts, a midway . . . We get tons of out-of-towners come to help us celebrate Canada’s birthday.

One of the main attractions is our large, sandy beach. This is what the beach looked like yesterday morning: 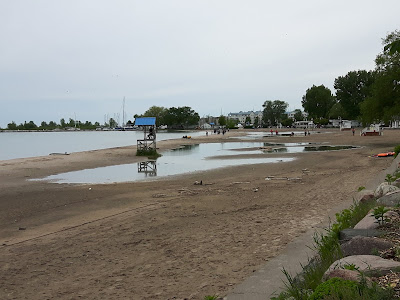 Not very appealing, is it?

We have two weeks for the water to recede so we can reclaim our beach. It’s anyone’s guess if we’ll make it.

To Bee, or Not to Bee

I'm kind of cheating today. It's still pretty cold and miserable here, and we still don't have much of a beach. This picture was taken last year at the Ecology Garden on the West Beach.

I'm not sure how our local bees are faring in the cool, wet weather, but hopefully they're resilient little guys. 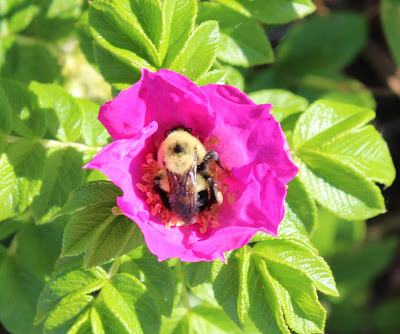 Technically, this is part two of last week’s post.

For those of you who missed it, a quick recap. We’ve had an above-ground pool for over 20 years and it needed to be replaced. Now that the hubby’s retired he didn’t just want a pool, he wanted a POOL. It might have been cheaper to go with an in-ground pool, but we aren’t able to do that because of the septic bed in the back yard.

When we bought this house, our neighbourhood was part of Hamilton Township, not the Town of Cobourg (which is why we had septic tanks instead of sanitary sewers). The first thing they did when they annexed us into the town is give us sanitary sewers (which we had to pay for) but we didn’t have to remove the septic tanks, just fill them up with approved filler and leave them in the ground. Had we removed it, we probably could have put in an in-ground pool, but that’s really, really expensive.

Anyway, when we put in the original pool the rules for such things were more relaxed. Fences only needed to be so high and they weren’t picky about what they’re made of. So we had a mixture of wooden, chainlink, and lattice (for the part at the front of the house to make it look pretty).

That ugly wooden fence had been there when we bought the house, but we added the chain link at the back when we got the first pool. There was chainlink and an ugly rail fence along the other side, but I didn’t think to get a picture of it before it was torn down. Nor did I get a picture of the lattice.

So that was the fencing we had. Now to tear it all down: 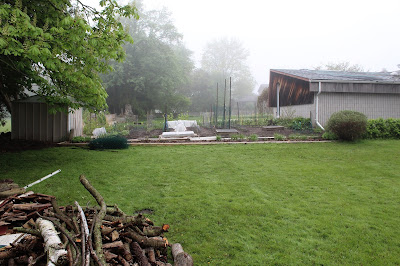 Notice the nice roll of chain link in the first picture. :-)

Now it was time to put up the new fence. We decided on wood for one side and the back. After the hubby put down the non-refundable deposit for the pool and arranged to have proper fencing put in (I think the chain link was only about 4 feet high and it needed to be 5), he went to the town for the permit.

Uh oh. Apparently the town’s website was out of date and the rules had changed. Fencing for pools now had to be 6 feet high for pools. Chain link had to be within a certain size of mesh, and the wooden fencing had to be made with vertical boards, not horizontal. If we wanted the decorative lattice on top, that had to be beyond the 6 foot mark.

It would have been so much cheaper to go with wooden fencing around the whole yard, but the neighbours on the west side have a huge vegetable garden and we didn’t want to block the morning sun from their garden. I’ll tell you this though, those neighbours better be planning to stay for a good long while because the posts for the chain link were driven down 3 feet and set in cement, so there’ll be no taking down that fence. 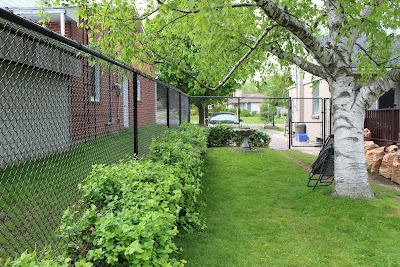 It was surprising how quickly the back fence went up. There are actually two guys working, one is behind the fence. 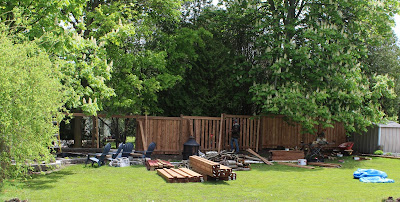 The hubby was careful taking down the old wooden fence because he was hoping to repurpose as many of the boards as possible into the new fence. However, once we saw how nice the back fence looked I couldn’t stand the thought of that beautiful wood getting covered with that ugly reddish brown stain so I talked him into going with all new wood for the side fence too.

They were done the back fence in a day. Then they were back the next day to sink the posts for the side fence and once the cement was dry framed it in so the hubby could do the rest himself.

This is a picture of the Bill the fence guy and the hubby working in the rain. Bill was only supposed to do the framing, but he stayed long enough to help the hubby with several sections, just to give him a head start and make sure he knew what he was doing.

And here are the finished fences: 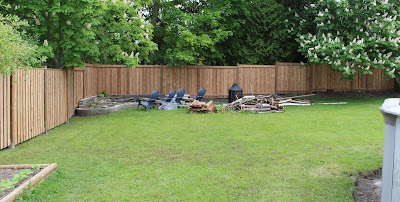 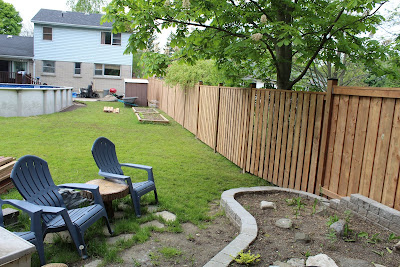 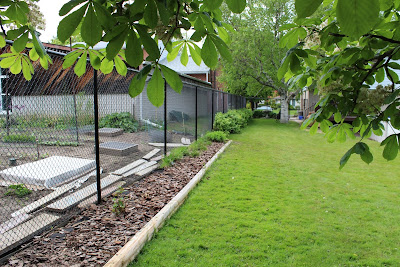 And what happened to the wood the hubby saved? Never fear. There’s still the playhouse he promised the grandbaby he’d build her.

But that’ll be a post for another day. :-D

It sits looking
over harbor and city
on silent haunches
and then moves on. 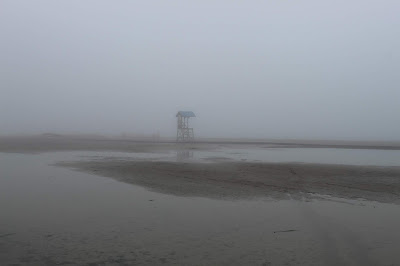 Once upon a time we had a pool that looked like this: 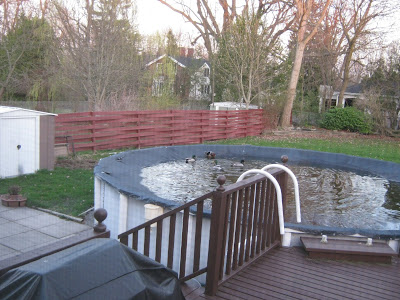 It was a nice size pool, considering about the only one who ever used it was the hubby, but we had it for a long time and it needed replacing. It had to be at least 20 years old, and I think just about every part except the uprights have been replaced over the years.

And you know, the hubby’s retired now so he has a lot more time to spend in the pool during the summer, so why not get a bigger, better pool?

But first things first. First, the old pool had to go. This left us with a nicely rounded hole in the backyard. Then it rained and we had a shallow pond where the pool used to be. 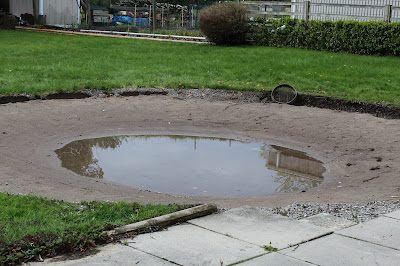 The pool guy brought in a baby excavator to make the hole the right size for the new pool – the hubby decided to go for an oval instead of round one. 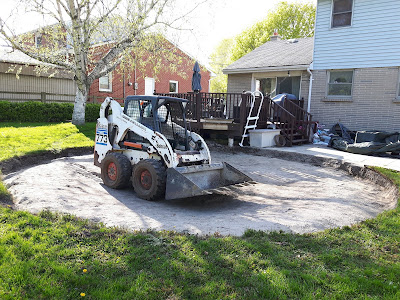 After getting the hole the right size and shape, the pool guys did a lot of this: 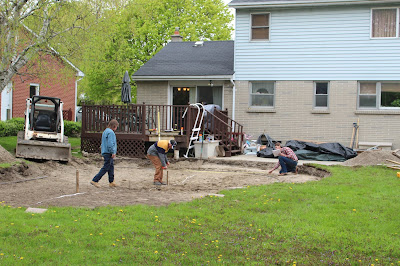 Apparently they’d never installed a pool like this before. But they finally adjusted the hole and tamped down the earth and started installing the braces and the track the sides would fit in. And then they did some more of this: 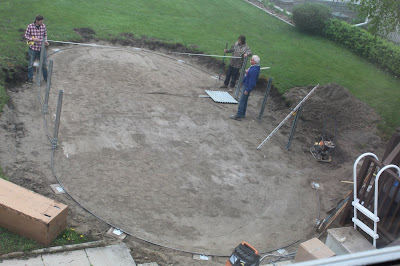 Next, the wall went up with a pad on the bottom: 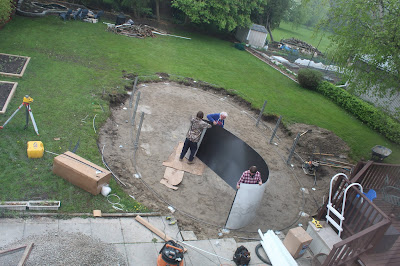 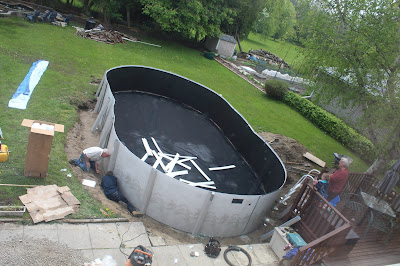 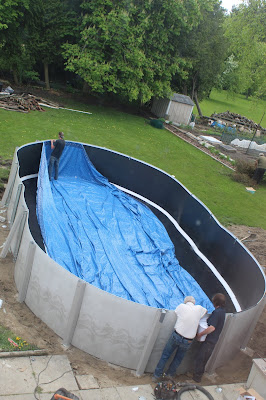 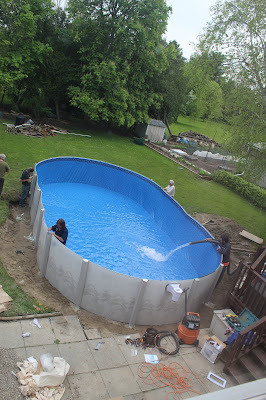 We could only put a couple of feet of water in it because we don’t have the proper fencing yet (next week’s post), and to save time we had it trucked in. It may be quicker to do it this way, but it’s a lot more expensive, so once the fence is up we’ll be using the garden hose like we did with the old pool. 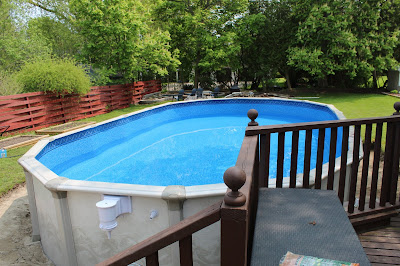