I believe in traditions; I believe in the idea of things being passed between generations and the slow transmission of cultural values through tradition.
— Graham Moore

The human soul can always use a new tradition. Sometimes we require them.
― Pat Conroy

Tradition is not the worship of ashes, but the preservation of fire.
― Gustav Mahler

One of my favorite things to wear is an over-sized shirt over leggings, so Friday I finally broke down and bought a couple of big shirts I’ve been eyeballing for a while now. And like many people, I seldom try things on in the store, which is the only excuse I can come up with for not noticing the weirdness of their design.

The shirts had a shallow scoop neck in the front, and a vee neck criss-crossed with fabric straps in the back. Maybe it was fashionable, but it didn’t seem very practical to have your back exposed in a long sleeved, tunic length shirt. I tried one shirt on, but it just wasn’t comfortable. So then I tried turning it around so the vee was in the front, but the neckline plunged just a little too low.

Here's the thing. If I hadn’t tried the shirt on I would have never known how super comfortable it was and I would have just taken them both back and exchanged them for shirts with backs in them. But . . . I did try it on, and it was really, really comfortable, and I figured there had to be a way to make it work.

Of course there was. First, the criss-crossing straps had to go so I cut them off. Then I figured the only way to make the vee less plunging was to hitch it up at the shoulder. This meant cutting off the sleeves, taking about an inch and a half off at the shoulder, re-sewing the shoulder seams, and sewing the sleeves back on.

It might have been easier had my sewing machine worked better, but all in all it wasn’t all that hard. But it got me thinking about how lucky I was to have had a mother who taught me how to sew at an early age.

While I can’t remember the lessons themselves, I remember her sewing machine – it was a Singer brand machine and you could sew forwards or backwards, that was it. And I must have been 12 or so when I learned because she died when I was 13 and at that point I was designing and sewing my own Barbie clothes. But she didn’t just teach me how to sew on the machine, she also taught me how to embroider and so I also have her to thank for my love of stitchery.

Email ThisBlogThis!Share to TwitterShare to FacebookShare to Pinterest
Labels: sewing, tradition, weekly update, what I've been up to

Don’t think. Thinking is the enemy of creativity. It’s self-conscious, and anything self-conscious is lousy. You can’t try to do things. You simply must do things.
— Ray Bradbury

Creativity is just connecting things. When you ask creative people how they did something, they feel a little guilty because they didn’t really do it, they just saw something. It seemed obvious to them after a while.
— Steve Jobs

Last week was a big week for me. I am no longer a Zoom virgin. LOL

This was actually a big step for me. I’ve been avoiding Zoom since our first COVID lockdown. It seemed horribly complicated.

But a few weeks ago, I had to ride herd on the grandbaby while she attended virtual school via a Zoom-like computer application. What made this seem complicated was all the little icons on the screen that I couldn’t really see because I wasn’t right in front of them and I’d broken my glasses. But she seemed to be okay with it.

Of course there was a lot of fidgeting and wiggling of loose teeth, but what else can you expect out of a group of seven-year-olds who were all at home? My real job was to keep the grandbaby focused on what the teacher was saying. If she missed an instruction I couldn’t help her because it was all in French.

Anyway, it got me thinking about Zoom and how I should really give it a try. So when I got the link from my stitchery group, I decided why not?

I tested the camera in my new lap top and it seemed to work fine. Then, when the time came, I clicked on the link and next thing you know I’m talking with my stitchery group. It was much easier than I thought it would be. The microphone was built into my lap top and I presume the volume was shared with the speaker volume. And even though I never touched the mouse, the screen never blanked out once.

We had a guest speaker that taught us how to Zentangle. Zentangle is a kind of meditative doodling. We worked on 3½ inch squares, drawing specific shapes called tangles. It was actually very relaxing so I can see where the zen part comes in.

You draw in pen, and if you make a mistake you just keep going. There are no mistakes in Zentangle. Even people who can’t draw can Zentangle. We were all pretty amazed at the results. We sent in pictures of our work, and were sent back an email with all the pictures in it. I was scrolling through it and I looked at one and thought “Oh, that one’s really good.” Turned out it was my own. LOL

There are lots of Zentangle videos on YouTube and I urge you to check them out and give it a try. It’s even more relaxing than colouring! 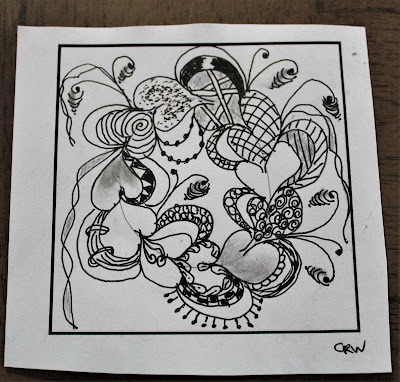 Email ThisBlogThis!Share to TwitterShare to FacebookShare to Pinterest
Labels: what I've been up to, zentangle, zoom

Quiet is peace. Tranquility. Quiet is turning down the volume knob on life. Silence is pushing the off button. Shutting it down. All of it.
— Khaled Hosseini.

A happy life must be to a great extent a quiet life, for it is only in an atmosphere of quiet that true joy dare live.
— Bertrand Russell

The monotony and solitude of a quiet life stimulates the creative mind.
— Albert Einstein

Well, Ontario may be opening up again (for now anyway) but I’m still leading a quiet life. I’ve been spending most of my time reading or crocheting, with the occasional break to work in my office (getting it cleaned and organized).

I finished the afghan I’d started for my mother-in-law’s birthday, and with a couple of days to spare. And I kid you not when I say that I had pretty much exactly enough yarn to finish it. 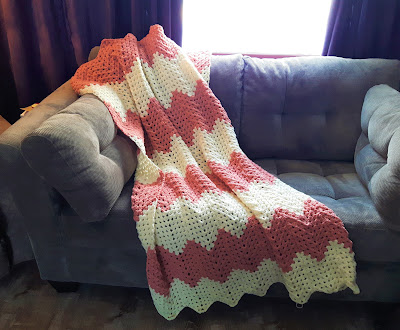 Now I’m going to do another one like it, only in green and cream, for a friend who has cancer.

Other than shopping, the only time I got out was last weekend when a friend and I went for a walk on the west beach. It was incredibly cold, but bright and sunny. There was a surprising number of people there, although most of them stayed in their cars parked at the yacht club. However, a few hardy souls were out walking along the point that borders the yacht basin, my friend and I included.

It was actually cold enough that I left my good camera at home, but I took a bunch of pictures with my phone. I’m amazed at how many of them turned out. The sun was bright and right in my face, and between it and my sunglasses, I could barely see enough to determine I had my phone in camera mode. I could see nothing on the screen to show what I was taking pictures of, I just pointed and clicked and hoped for the best.

This was taken on the arm of land sheltering the yacht basin, facing west. This next one was taken from the shore of the yacht club, facing south. There was a surprising number of waterfowl there – Canada geese, cormorants, loons, ducks – and the noise they made was deafening. 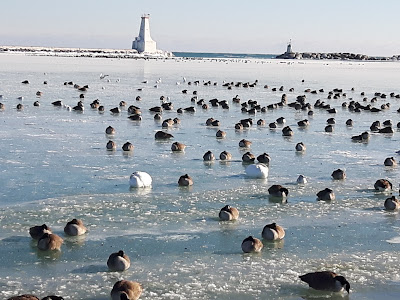 And for my final picture, I’m facing east, into the yacht basin where this quartet of trumpeter swans like to spend their winter. As big as they look in the picture, dwarfing the Canada geese around them, they’re even bigger in real life. I would not like to mess with one of these guys! 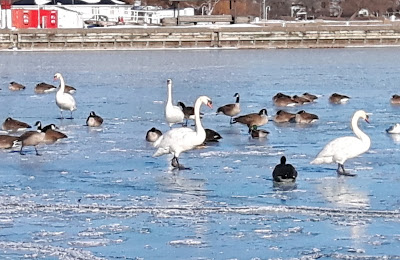 As I said, I'm pretty amazed at some of the shots I managed to get. Enough so that when it comes time to replace my camera I just might replace my phone instead. Something with an even better camera.

Five out of seven days next week are supposed to be snow filled, and with the temperatures flirting around the freezing point it could go either way. Perfect weather for more reading and crocheting. :-D