molochize ~ to offer up or immolate to a god

So . . . the contractor came and installed the cupboard that goes above the microwave and that was pretty much all he was able to do because the microwave (that turned out to be even bigger than our old one) was delivered a few hours after he left. Supposedly he’ll be back today to take care of it.

You might be wondering why he didn’t get the trim up to at least finish the other cupboards. Well, there’s a good reason for that. He was going to, but he opened the wrapping around the trim and discovered . . . it was the wrong stuff. Instead of the thick stuff that goes above the cupboards, it was the thin stuff that goes below them.

But at least we heard from the counter people, and they should be ready by early February. And with any luck the plumber will be able to come the same day to hook up the sinks and dishwasher. Be still my heart! *knock on wood*

In other news . . . I learned something new last week. Foxes can climb fences. 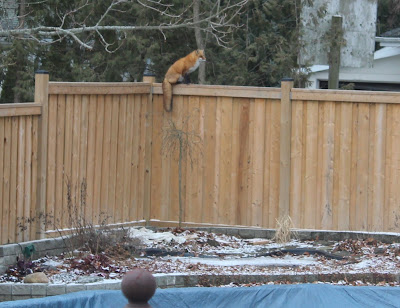 I was sitting in the living reading when a flash of orange out on the deck caught my eye. It was our friendly neighbourhood fox on our deck. Winter has finally come to our neck of the woods and I think he was looking for a drink of water because he went out onto the frozen surface of the pool.

By the time I made it to the deck doors with my camera, he’d crossed the pool, paused at the edge, then jumped down again. I watched to see how he was going to get out of the yard again, and to my surprise he climbed the back fence.

He perched on it for a few seconds, and then followed along the top of it like a squirrel before jumping down into the neighbour’s yard. 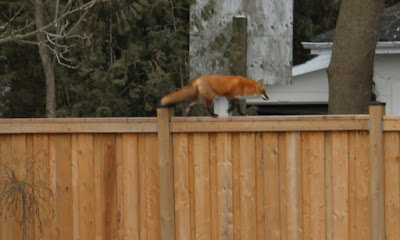 It was nice to see my old friend again. 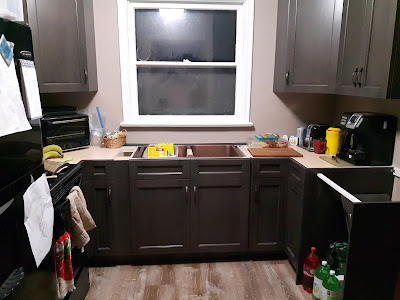 myringoscope ~ instrument for viewing the eardrum

So . . . remember how when we had the cabinets delivered for our kitchen renovation that we were missing a box, the one with the over-the-range do-dad for the microwave? Well, we got a call a couple of weeks ago that it was going to be delivered within a few days.

Later that week we got a delivery – of a cupboard and a large flat panel of . . . something. The cupboard had doors on it so obviously it wasn’t meant for the microwave, and the panel was just puzzling. And there was no sign of the wider trim the contractor had ordered.

Of course the design guy at Home Depot wasn't working that day, and it took a while to actually get a hold of him ‘cause he tends to duck our calls. But he did check into things and confirmed that yes, the missing part of our order was still coming.

Meanwhile, despite already being on lockdown, there were indications that Ontario was going on super duper double lockdown, so our contractor stopped by because he’d heard we had some more stuff delivered. There really wasn’t much he could do with what little there was, so we’re supposed to call him when the rest of it arrives.

Then we got another delivery. This time it was the wider trim and a really long thin package that looks like it has a really long panel of some kind inside it. No brackets or anything that might hold a microwave.

It turns out that we need a new microwave – an over-the-range microwave with built in vent. It attaches to the cabinets on either side of the stove and the one that will be above it. And because we have to order it online, it’s going to take at least another week until it gets here and then the contractor can finish the cupboard portion of the kitchen.

And don’t be fooled by the picture. The sink is just sitting in the space where it’s supposed to go, supported by a stack of bins underneath. And the flat surface on either side is just the wooden tops of the cabinets below.

While I can’t use the space for anything that requires cleaning up the surface after, we can still sit the toaster oven in the corner on the left, and the coffee maker on the right. Makes life a little easier at least.

But there’s still no word on when we’re getting our counters.

Everyone have a happy New Year celebration?

I spent the better part of my afternoon in the kitchen. Dinner was a tad labour intensive, and I was actually doing two of them, one to be dropped off to the father-in-law. We were going to have dinner together, but Ontario went into lock down again on Boxing Day.

Our traditional NYE dinner is stuffed game hens, and this year I decided to do something a little different to go with them. Trying out a new recipe can be a chancy thing, and two at one meal could turn out to be disastrous, but they came out okay. The first was broccoli en croute, which is basically broccoli in a cheese sauce wrapped in puff pastry. The second was potatoes and tomatoes layered in a baking dish with cheese on top.

After dinner we went down stairs to watch a festive, New Year’s movie – Godzilla, King of the Monsters. Remember while we were waiting for the kitchen reno to start how we redid the rec room as well? 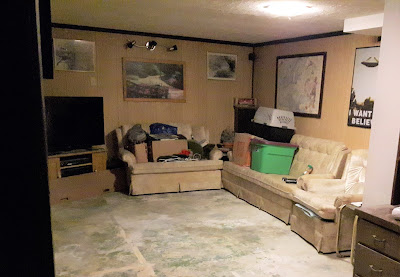 At 14 weeks we called and were told it wouldn’t be delivered until the end of January. Enough was enough. And it wasn’t even so much the length of time it was taking, as it was the way we were treated. They changed the delivery date on us twice without doing us the courtesy of a phone call and there was no explanation, no apology.

So we drove up to Peterborough to cancel our order (no big deal as far as they were concerned). On the way home we stopped at the store where we bought the reclining love seat that’s been the only furniture we’d had in the basement for the last three months, and saw the perfect couch set the minute we walked in the door. It was delivered a week later. 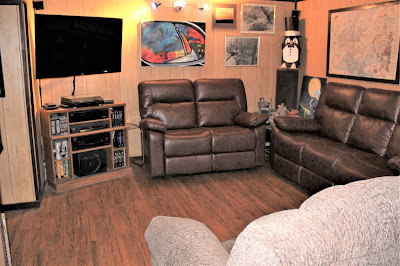 Personally, I like it even better than the set we’d picked out from Leon’s. And once the lock down is lifted, we have seating for up to seven people in the rec room, six of whom can recline.

So the moral of the story is: shop local.