Shh! Be very quiet. The sun is out and we don’t want to scare it away!

It seems that mother nature has taken pity on us and spring has finally arrived. The temperature has been rising and the sun has been out more often than not over the last few days. The forecast for the week ahead has a little more rain than I’d like to see, but there’s the promise of the odd day or two of sun as well. The temperature is going to start out around 10 C, if not warmer (that’s around 50 F to you Yankees), gradually dipping down to about 6 C (43 F) by the end of the week. But it's better than minus temperatures.

Saturday was a beautiful day, so naturally I spent it inside, in my office, moving furniture around. I don’t really regret missing out on the beautiful weather, I got a lot of work done and much satisfaction was to be found. Much junk too, which went into the donate pile.

Sunday was an even nicer day, and the hubby and I took a road trip to Peterborough. And I’m sorry, hubby, but the story of why we had to take the daughter’s car is just too funny not to share.

As the hubby was driving home from coaching the kids in the Youth Bowling Canada league, as he does every Saturday morning when he doesn’t have a tournament, he got stopped by the police. Yes, he got a ticket. No, it’s not for what you’d think it was. He wasn’t speeding, he had an expired license plate sticker. Seems he forgot to renew it in February when his birthday rolled round.

His excuse to the officer? “I don’t remember getting the form in the mail to take in for renewal.” Yeah, you did. You found it right where I said you usually stick things like that. In the mail holder on the top shelf of the seating unit in the front hall. To be fair, they send out the renewal forms several months before a person's actual birthday, so I'm pretty sure people forget all the time.

Because it was Saturday, the officer gave him a ticket and advised him to keep it in the car in case he got stopped again. The license office is closed on the weekend but he can only be ticketed once over the weekend. But it also meant that we were restricted to driving in town, hence the need to borrow the daughter’s car for our road trip.

So Sunday, while everybody else was outside enjoying the vitamin D, we were stuck behind dumbass slow drivers enjoying a leisurely drive to Peterborough. Our primary goal was to look for a chair for my office, but first we stopped off at one of the big thrift stores to drop off a load of “stuff”. This consisted of the donate pile from my office and a couple of big bags of clothes from the hubby’s closet (which is how he spent his Saturday afternoon).

The furniture store we went to had an amazing selection of chairs. I didn’t want a recliner and I didn’t want a chair that rocked, although I was okay with one that swiveled. There were several I really liked….until I saw the price tag. Call me crazy, but $1200.00 for a reading chair for my office is just a little too pricey for my taste.

As we were winding our way towards the exit, there it was – a dining room table with four chairs. It was pub height, which we always wanted, and could be either round or square. Square, it was 42” across and would fit four people comfortably. Round, which was done by putting up the four drop leaves, it was 60” across and would fit eight comfortably. And it had a lazy susan in the center.

We sat there, thinking about it, for so long that one of the sales staff passing by joked that she wasn’t bringing us our lunch. But the chairs were comfortable and we could totally picture sitting at that table to eat or do paperwork or whatever else people do at dining room tables.

It was twice the price of the dining room set we almost bought at Costco, and missed out on because by the time we decided we wanted it, it was gone and they weren’t getting any more in. And the wood was kind of a barn board grey, which really doesn’t go with anything else in our dining room.

morphogenesis ~ origin or development of a body part or organ

Just when I thought it was safe to put on my gardening gloves, this happened: 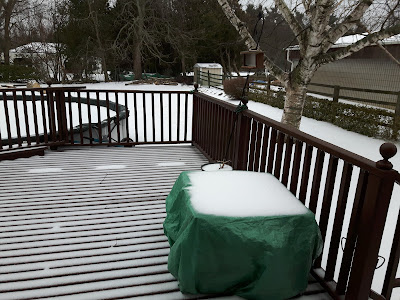 That’s not really snow you’re seeing, that’s the build up of ice pellets from our two day ice storm over the weekend. We were actually pretty fortunate that we never lost power – many communities around us did. Stretches of the 401 were closed periodically because slippery driving seems to bring out the stupid in people, and there was a whole list of closures and cancellations on Sunday.

I thought April showers were supposed to bring May flowers, not ice and snow?

The bulbs I bought last week are sitting on the dining room table sprouting in their little mesh bags. I’m sure this doesn’t bode well for them if/when I finally get them in the ground. But I have 50 iris bulbs, so surely a few of them will survive.

This week I really have to start thinning out the tomato plants the grandbaby and her Grappy started. They are growing like crazy: 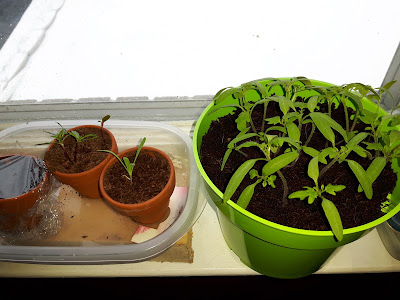 The marigold seedlings are holding on, as is the brave little daisy. The forget-me-nots were still not doing anything, so I bought some more seeds and replanted them (which is why their pot is covered in plastic again).

Not pictured is the green divided tray the grandbaby and I planted a variety of seeds in last week – morning glories, stocks, catnip, and dill. Unfortunately, I did not label anything so I have no idea which pot holds which plant. Guess we’ll be surprised. LOL

We also planted a fairy garden last week. This was a kit that I bought from Giant Tiger and I actually had my doubts about anything coming of it because that’s where I bought the little single pots with the forget-me-nots, marigolds, and daisy. So imagine my surprise when I checked them on the weekend and saw this: 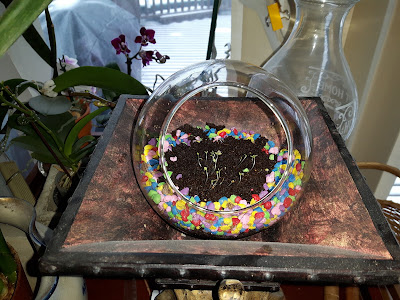 In conclusion, it may not be spring outside, but it’s coming along nicely inside. :-) 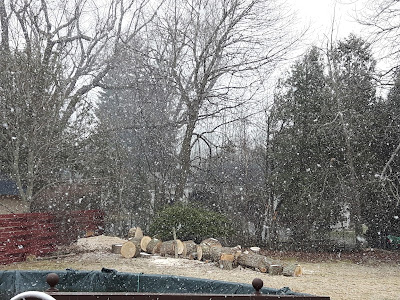 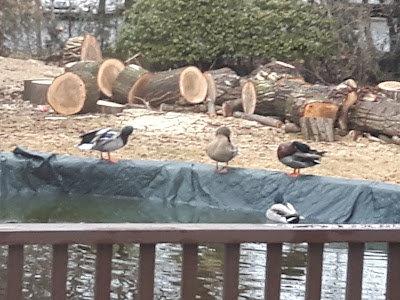