Well, I’ve found something I hate even more than the time change. Windows 10.

If you’re a reader of my Other Blog then you already know about my search for a new lap top. As much as I love my Samsung, I’m almost afraid to turn it off for fear it won’t start up again. The night it slowed down to an absolute crawl I quickly began backing up all my important stuff onto a flash drive, just in case.

The decision of which lap top to buy wasn’t an easy one. To be honest, I’m not as techy as I used to be and I find that one lap top is pretty much like another. So I made a wish list of what I wanted in a new machine and found my dream machine, had trouble with the ordering process, modified my wish list, and went to Staples where I finally bought my new lap top off the shelf. The only thing it fell short on was the battery life, but to be honest I seldom need to run off the battery for more than a couple of hours at a time, so no big deal.

While a back lit keyboard was on my wish list, the bonus with my new lap top is that it’s multi-coloured and I can set it for any or all the colours. But unfortunately, the big drawback with my new lap top (which would be the same for any new lap top) is that it came with Windows 10, with its eleventy billion useless (to me) apps that seem mostly geared for information mining.

And what’s with all these freaking updates? If you didn’t have it right to begin with, don’t release your product and then expect the consumer to constantly update. I mean seriously! I wasn’t even all the way through the set up process when it decided to update. And update. And update. Several hours later I left it running and went to bed. When I got up the next morning it was just finishing up. I was able to finish my setup, access the main screen, AND THEN IT UPDATED AGAIN!

Once it finished I pretty much shut it down and didn’t open it again until the weekend, after I spent a couple of hours cleaning up my office. I found myself spending more time than I strictly needed to reorganizing files, realized I was just putting off having to deal with the new lap top, and cleared off my desk to make room for it. 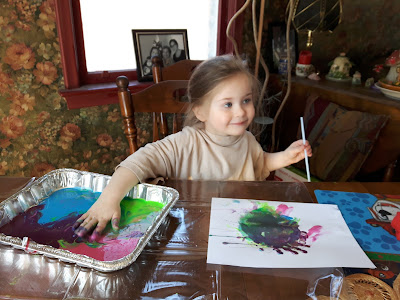 First of all, I want to state for the record that I HATE the time change. The purpose it was intended to serve no longer applies, and in the next election I will only vote for the party that promises to get rid of it.

Somewhat quiet week last week, and the same could be said for the weekend, other than a trip to one of the nearby malls. The mall in our town is kind of sad and pathetic, so if you want to do any real shopping it’s an hour drive in any direction but south - we’re right on the lake so if you go south you’ll end up in Lake Ontario. ;-)

Sunday I worked away in my office, going through files and moving folders around. This part of the Great Office Shuffle is turning out to be more complicated than I expected. While I have storage space in the closet, the big question is what should go in there and what needs to be closer at hand. This is made even more complicated by the fact that I’m technically organizing two offices - my new one and my old one.

There is a lot of stuff to go through and shuffle around. Not just blank paper (in various weights and colours) but notebooks (various shapes and sizes), binders, folders, document covers, printable labels, and photo paper. And let’s not forget the files full of....stuff - stories and pictures and information.

In my younger days I used to enjoy cutting up magazines -saving stories, recipes, articles, pictures - even National Geographics weren’t safe from my scissors. This has led to a great number of folders of clippings. Once box I found was all recipes. It looked like at one time I tried to organize them by gluing them to three-ring paper and put them in binders, but it’s got to be at least ten years since I even saw that box.

It kind of put me in the mind of the show on the Arts & Entertainment network called Hoarders. Have you ever seen it? Look it up if you haven’t. I can only watch it for short periods of time, I find it too disturbing. Maybe because I’m such a pack rat and I can relate a little too well to these people. I can live with being a pack rat, but I can’t imagine being a hoarder. Hence the purging of the boxes of files in the offices. And my ongoing efforts to de-junk the rest of the house.

And after all, it’s not like we can take it with us.

Considering it was still February last week, the weather was putting thoughts of spring in the air. We got a bit more sun than we’d been having, and the temperature was downright pleasant.

March first I looked out the back when I was having my breakfast and saw one of these: 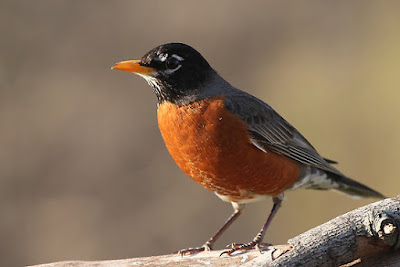 The first robin of spring! I took it as a good omen. Until the following day when I woke up to six inches of snow over everything. *sigh* Now it melted rather quickly, as did the snow we got during that night, but still....

Spring doesn’t officially start for another three weeks, and a lot of people believe we’re not safe from the white stuff until after Easter, which is only a week later. I’ll keep my fingers crossed. I am so done with winter!

I’m counting on the robins to be harbingers of spring, it’s tradition after all. Another tradition is the changing of the purse. I had an Aunt who had a different purse for every season (as well as a few extra - must be where I got my love of purses from) and the first sign of spring with her was the changing over of the purse.

Though I like purses I tend to stick to one no matter the season. I have a tiny one for when I’m going out somewhere fancy, a big cloth one as an option for summer, and both a medium size and a large red one just because they’re pretty.

My most recent purse was a weird shade of green that almost, but not quite, matched my leather jacket and was big enough to hold my Alphasmart Neo (one of the selling features), should the need arise. I had another one at one time that was an even weirder colour of green and I used it for a long time. I paid a stupid amount for it because it was supposed to be genuine leather. I’m pretty sure the outer layer isn’t supposed to flake off with genuine leather.

If you’re curious as to how you can tell the difference, check out this helpful article from One Leaf

The next purse was definitely genuine leather, the large red one I got from a friend. The problem with it was that there was no shoulder strap and I like a shoulder bag. Then I got the medium sized red purse, thinking I needed a smaller purse. No I didn’t. I like big purses and I cannot lie.

There were several purses I tried in between, some bought at full price and some bought at thrift stores but none that were quite right. I just got rid of a huge purple purse that while it looks nice and I like the size, I’ve never used because the shape is a little unwieldy.

The green purse I was forced to retire was suffering from the same illness that the first green purse had - flaking skin. It lasted really well considering it was a thrift store find, but as much as I loved that purse it was getting really ratty looking. Time to let it go.

So on the weekend I went purse shopping and after much debate and many (many!) rejections, I found a replacement. It’s basic black leather, a little smaller than my old one which means there’s not enough room for my Neo, but plenty for notebooks and my Kindle. Now all that's left is the adjustment period.

I’ve got my new purse, can spring be far behind? What are your favorite signs of spring?