monophylletic ~ descended from a common evolutionary ancestor or ancestral group

Just so you know, I’m not enjoying the forced social isolation as much as I thought I would. As a matter of fact, I’m finding it’s a lot like the books we had to read for English class in high school. It’s great when you do it of your own free will, but another thing altogether when you’re forced to.

I can’t say that I’ve been making good use of all this extra time on my hands. Mostly I’ve been reading or playing solitaire on the computer. For variety I’ll do a hidden objects game or on-line jigsaw puzzle. It’s hard to generate motivation when the world is going to hell in a handbasket.

Sometimes I muster a little energy to do something constructive though. I’ve been plugging away at my appliqué piece for the Stitchery Guild, but the light’s not so great in the living room/dining room area and I can only work on it when it’s sunny out, which it hasn’t been much lately. But I did finally finish the sweater for the grandbaby.

I had so many problems with it I started calling it ‘the cursed sweater.’ First the darker turquoise I’d chosen for the yoke wasn’t the right weight of yarn, a fact I didn’t realize until it was finished with the ends tucked in.

With a lot of patience and good light (and a great deal of cursing) I was able to unravel the yoke which included the button bands and collar. And I ended up with two extra stitches on my knitting needs. Oh, well. Better two too many than two too few.

Then I had to figure out where the middle of the sweater was again. Not an easy task when you’re working on circular needles. But I figured it out and the new yoke went on fairly quickly. Then I finished it and . . . overlapped the button bands the wrong way and sewed them in place with the button holes on the inside.

And of course I didn’t figure that out until I’d tied up the loose ends and skillfully woven them into the sweater. OMG! I sweated over getting that piece apart again, I tell you what! It taxed my patience but I got apart and sewed it back up, and sewed on the bunny buttons because the grandbaby loves bunnies, and here she is, modeling the finished sweater: 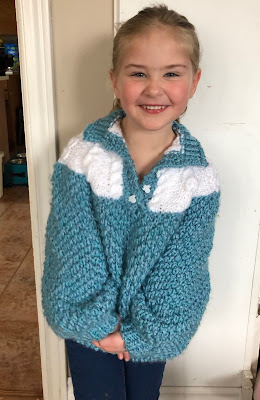 And totally worth everything I went through for that sweater. 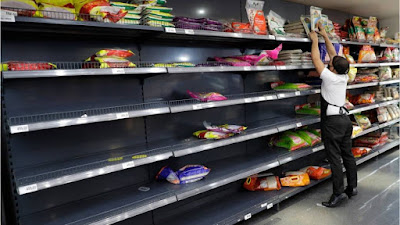 How much things have changed in such a short space of time . . .

This time last week the Coronavirus (or COVID-19 if you prefer), was just something that was happening overseas. Didn’t really affect us unless we were travelling. Now it’s a pandemic and we’re pretty much on lock down.

Schools are closed, trips are being cancelled, businesses are closing up . . . the NBA and the NHL have suspended their games, the Juno awards have been cancelled . . . grocery stores are emptying out of stock faster than you can say “toilet paper.” We’ve been told to avoid social gatherings and stay at home whenever possible.

The March Break (which is this week) has been extended by two weeks, coinciding with the closing of many family friendly venues – Neb’s Funworld, the YMCA, the Cobourg Community Centre. Several daycares have closed their doors temporarily as well, which begs the question, what are parents going to do with their kids for three weeks?

For myself, this week’s poetry reading has been cancelled, tai chi classes have been suspended, and I suspect I’ll be getting word any time now that the Stitchery Guild meetings will be suspended.

My normal strategy for the weekly grocery shopping on Fridays is to hit Walmart at 7 a.m. when it opens, then No Frills at 8 a.m. when it opens. Walmart was nightmare. I’ve never seen it so busy, even at Christmas during a half price sale. No Frills was downright terrifying. People were buying non-perishables by the case, and bottled water and paper products (toilet paper, tissues, paper towels) by the cartload.

Seriously, do they really believe buying a year’s worth of toilet paper is going to keep them from getting sick? Wash your hands, people. And stop touching your faces! 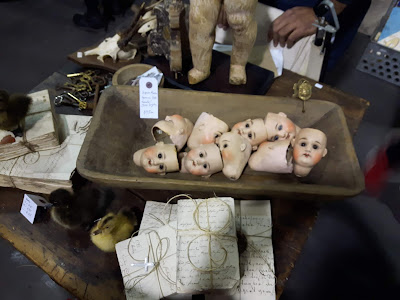 A funny thing happened to that sweater I was knitting for the grandbaby. The contrast yarn I bought was a lighter weight than the main yarn. The colour was good, but the yoke is kind of . . . stretchy. And the collar (which is made from the heavier, main colour yarn) looked kind of small. And I didn’t notice how bad the overall effect was until I’d completely tied up loose ends and finished it up right.

The annual Vintage Clothing Show was on this weekend, and the daughter and I made the pilgrimage up to Toronto to see what treasures they had to offer. This is the second time we’ve gone and it’s turning into kind of a nice mother/daughter tradition.

We got there a lot earlier than the last time, and were glad we did – by the time we broke for lunch it was getting really people-y in there. I found the price discrepancies from vendor to vendor very interesting. Some places seemed reasonable, others bordered on ludicrous.

And speaking of ludicrous, lunch was insane. Our choice was a $7 hotdog or a $9 bagel sandwich. A bottle of water was $4.50. If we had realized how little we had left to see, we would have skipped lunch at the show and walked over to the nearby Starbucks afterwards.

Still, we managed to come away happy. The daughter snagged a gorgeous poufy skirt for a song – apparently the guy selling it couldn’t read his own hand writing. I found a matching jacket and skirt with lots of beadwork and appliqué for a less modest price. They’re a little too fancy to be worn together, in my opinion, but they'll look great with other stuff.

The picture above was taken at the show. The doll heads looked a lot creepier in person than they do in the picture. And yes, those are real ducklings on the bottom left – not live, of course, which made them also creepy.

We came away from our excursion with money left over, so we stopped at the Oshawa Costco on the way home. I’m sure I’ve mentioned this Costco before, it’s the one I found annoying because everything is backwards to the one I’m used to, and the customers are really mean.

Well, now I have a witness. The daughter didn’t like it either. It kind of sucked all the fun out of going to Costco for us. And why go to Costco if you can’t have fun?

All in all, despite Costco, we had a really great day. 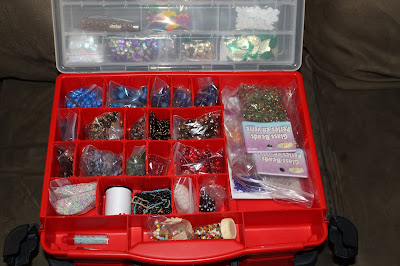 I was hoping to have a picture of the grandbaby’s sweater for you today, but as the typing of this post it isn’t quite finished yet. But it’s close, very close. However, it’s a good thing I made it a size larger because it’s a heavy sweater and the long range forecast is for above freezing temperatures. It might be next year before she has a chance to wear it.

Instead the above picture is of the nifty craft case I went all the way to the Peterborough Costco for. The hubby and I saw it last week (?) when we were there and although he urged me to get it, I wasn’t so sure I’d be able to use it. I was thinking stitchery stuff at the time.

But that was before I attended the Stitchery Guild’s appliqué workshop. The pieces we were creating weren’t just appliqué, they were more like fabric art, which included lace and ribbon and assorted doodads. And wouldn’t that craft case come in hand for all that stuff? Of course it would. The only thing that kept me from going earlier in the week for it was the weather. LOL

So Saturday morning I hied me to Costco and bought the case. And since I was in Peterborough anyway, I also stopped at Michaels (you know, the giant craft palace). I honestly didn’t need to stop there because I had more than enough doodads at home to fill the case, but you know how it is. Craft Store.

One of things I scored there was a set of beading needles that had collapsible eyes. I used to do a lot of beadwork – one year for Christmas I beaded dragons on velvet bags for a select group of friends – but it was hard enough to thread those beading needles when I had perfect vision. Now that my vision is much dimmer it’s pretty much impossible, so it’s been a few years since I’ve done any beading. Now, however . . .

Anyway, after a lot of debate I decided to use the case for beadwork and fabric art. I could have used one side for stitchery stuff, but I already have a bag that works for that, and the beading/fabric art stuff seems to just fit together.

The case is nicely compact, but the picture doesn’t do justice to just how much it holds. Each side has two layers, and the dividers are removable so you can make the rows as short or long as you want. My only complaint is that although there are a couple of large compartments, they’re not large enough to hold works in progress.

So . . . in my case you’ll find glass seed beads, sequins, charms, larger glass beads, jewelry hardware, needles, wire, thread, and all my beading odds and ends. Believe it or not, I didn’t fit everything in there – I still have a plastic bin with wooden beads, regular seed beads, cords, beading looms, and bigger, bulkier supplies.

Now the push is on to finish that sweater so I can get at some stitchery. I was off to a slow start with my ideas for the appliqué piece, but now I know exactly how I want to lay it out and how I can enhance it with some beadwork – if those new beading needles work.

And once I’m finished that piece, I have ideas for two larger pieces.

Things are about to get very creative around here.