As you might have guessed, it’s been a bad couple of weeks. The dreary-wearies I talked about in my last post morphed into full blown depression, thanks in no small part to the excessive grey, gloomy, dismal weather we’ve been having lately. You know it doesn’t bode well for your mental health when you check the Weather Network and the daily hours of sunshine are reading “one” across the board.

And then I got hit about the head by the bad luck fairy around the middle of last week. If I hadn’t had two full days of babysitting, I’d have just packed my bags and moved some place sunnier, I tell you what! Either that or crawled back into bed and stayed there until spring.

And while we’re at it, let’s throw a little “be careful what you wish for,” in there, shall we? As you may recall, when I was searching for a comfy reading chair for my office I had been lusting after one of those round chairs with lots of pillows (that I’ve since learned are called cuddle chairs). There just wasn’t enough space in my office for a chair like that so I ended up with a wing chair – which is perfect, I might add. But I never got over my desire for a cuddle chair.

For a long time now I’ve been . . . unhappy with my recliner. It’s old and broken and falling apart – the upholstery is letting loose and it doesn’t recline fully. So then I saw a cuddle chair in the Costco we frequent. Yes, it was a little on the big side, but not too big for the space my recliner is in.

I hemmed and hawed and wished about it until the hubby told me if I wanted it I should just go ahead and get it (probably only told me that to shut me up). After hemming and hawing about it for a while longer, I finally placed an order for a cuddle chair online through Costco.

It came on Thursday and with the luck I’d been having it wasn’t really a surprise that the box they pulled off the truck was HUMUNGOUS! Don’t panic, I thought. There’s a hassock and a bunch of cushions in that box too so it’s probably not as big as it looks. Yeah it was. The cushions and hassock fit nicely into the corners of the box and the chair pretty much touched the rest of it on all sides.

I had already cleared out my corner (and vacuumed and swept), and the chair was already put together, so all the hubby and I had to do was wrestle it into its corner (after moving one of the couches to get it in there). It fits – just. And just so you know, it is definitely bigger than the one I saw in the store. 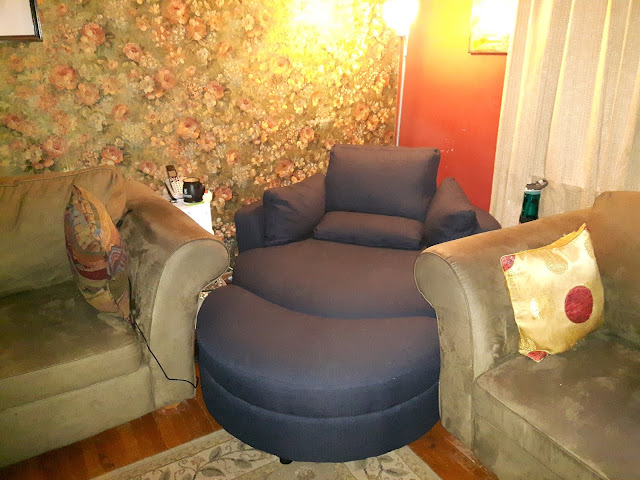 Of course the next problem was where do I put my cup of coffee? Believe it or not, there was actually space on either side of the chair, just not enough for the old tables (although now that I’m sitting here looking at it, there might have been enough for the small wooden one). I tried using the window ledge, which is within reach, but after knocking over a forgotten cup that still had tea in it when I was trying to put a cup of coffee there, I decided that wasn’t such a good idea.

So Saturday I went on a road trip with a friend and we checked out the local thrift stores, then ventured further north to an antique store and a junk shop, but ultimately came home empty handed. Sunday I checked Walmart for a plant stand and had no luck. Then I went to the department store in the mall everyone always forgets about and found a small, white, triangle shaped stand – I think it’s supposed to go on the wall, but it works on the floor just as easily. And it has shelves! It’s a little smaller than I’d been hoping for, but that just means there’s less space for junk to accumulate.

For the other side, where I usually have my water bottle and/or mug for hot beverages, I stole one of the two ‘C’ tables the hubby had on either side of his chair in the basement. This is one of those TV/accent tables made of brass with the glass that sits on it. It’s small and there are no shelves, but it’s the right height and there’s room for a book and drinks on it. Plus there’s a heat vent right under it so the open frame is perfect.

So, while the weather is still dismal, dare I hope my luck is beginning to turn? *knock on wood*

I have a bad case of the dreary wearies.

What are the dreary wearies, you ask? It’s from one of the grandbaby’s books called The Pout Pout Fish. The Pout Pout Fish swims around looking sad and his various fish friends all try and get him to cheer up, but every time he answers with:
“I’m a pout pout fish
With a pout pout face
And I spread the dreary wearies
All over the place.
Glub, glub, glub.”
Finally, at the end of the book he’s drifted to the bottom of the sea where he’s lying upside down on a rock and this beautiful silver fish swims over and gives him a kiss. Pout Pout Fish suddenly realizes he’s not a pout pout fish, but a smooch smooch fish and now he spreads smooches all over the place.

Anyway, now whenever the grandbaby is in a grumpy mood I tell her she’s being a pout pout fish.

So what do I want to do? That’s the problem. I don’t know.

This tends to happen to me about this time every year. It’s the season of transition where I don’t know what I want to do so I end up doing nothing and then I get a big case of the guilts for not getting anything accomplished.

All I know is, this too shall pass. Hopefully sooner than later. I wouldn’t want to be a pout pout fish forever. 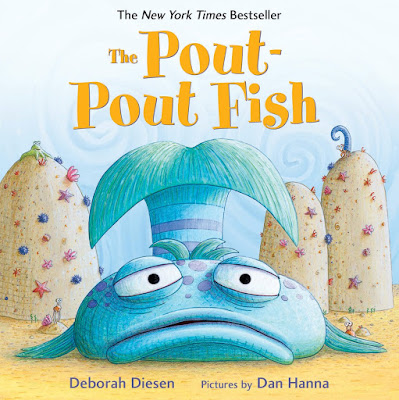 Happy Thanksgiving to all my Canadian friends! 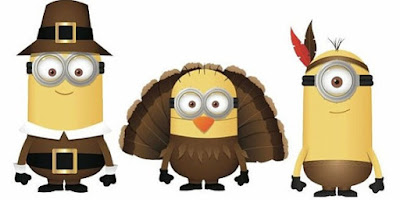 As I write this post I am suffering from a turkey coma, which is entirely my own fault. What can I say? The grocery store seduced me with its sale on turkeys and somehow this 23 pound turkey just jumped into my grocery cart.

There were five of us for Thanksgiving dinner. That’s 4 ½ pounds of turkey per person, along with all the other stuff: potatoes, peas, carrots, dressing, rolls, sweet potatoes… and pie. Let’s not forget the pie.

The daughter made a beautiful pumpkin pie. 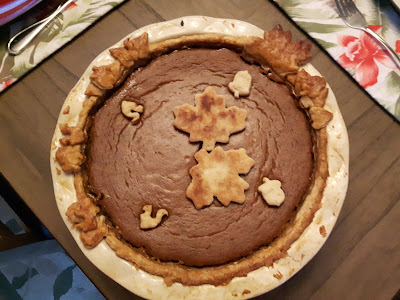 And I knew she was bringing it, but that still didn’t stop me from buying one at Costco the day before dinner. Again, I was seduced by the sale price. I mean seriously, did you see the size of those Costco pumpkin pies? They were huge! And really cheap.

I’m grateful that I live in Canada where we can enjoy free basic health care, a calmer political landscape, and the changing seasons.

I’m grateful that we have a roof over our head and food on our table.

I’m grateful that I have good health (relatively speaking).

I’m grateful that the hubby is just about finished his chemotherapy after his cancer scare.

I’m grateful for my beautiful daughter and her hubby.

I’m grateful for my amazing granddaughter who grows bigger and brighter each day. She really is my sunshine.

I’m grateful for all my friends and family, both near and far.

And most of all, right now I’m grateful for stretchy pants. :-D 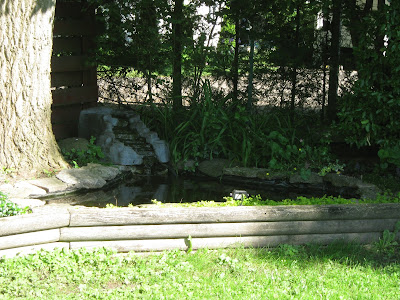 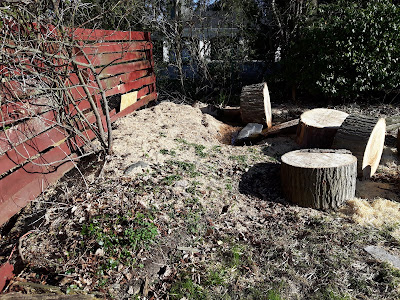 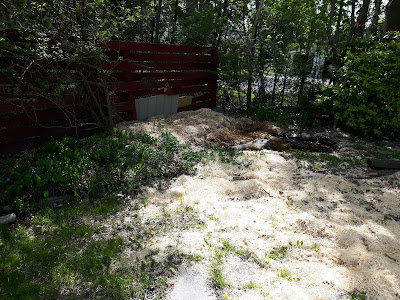 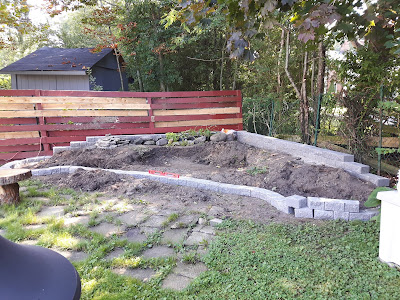 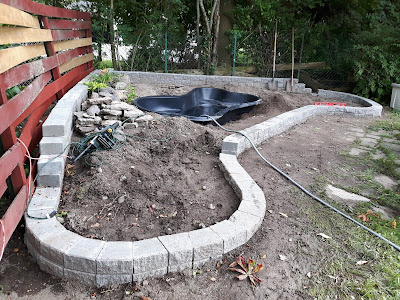 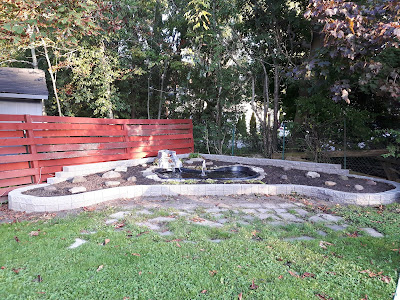 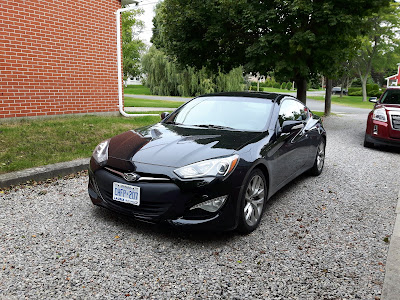