It's Christmas Eve and I thought I'd share a few of my favourite Christmas carols:

Carol of the Bells - Celtic Woman

I Believe In Father Christmas - Emerson, Lake, and Palmer

Where Are you Christmas - Faith Hill

So ... a week or so ago I made the off hand comment that I'd be posting the occasional Christmas video and it's been brought to my attention that I haven't done so yet. Oops! My bad! But even though I'm knee deep in Christmas baking and crafting, I figure I should get on that. 'Cause you know, Christmas is coming! ;-)

First, I thought I'd start with the traditional tree picture. Aside from the Hello Kitty on the top, the lights, and the two cats jockeying for space underneath it, all the ornaments are hand made. This was a tradition started many years ago by my daughter and I - we'd make a new craft each year and sometimes we'd even make enough to give to friends. 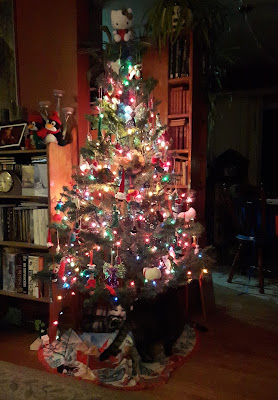 For my first Christmas video, I present the other reason we have hand made, and far less fragile, ornaments:

These others are just for fun. :-)

I’ll bet you thought that since NaNo is over with now I’d be back to my regular blogging schedule, didn’t you? Well I have news for you. In case you haven’t heard, Christmas is only TWO WEEKS AWAY

And therein lies one of the major drawbacks of NaNoWriMo. It happens in November. At the beginning of November Christmas is still weeks away so you can pretty much ignore it (like you do everything else for the month so you can get those precious words in).

But suddenly it’s the end of November and before the ink has dried on the winner’s certificate you’ve just printed out, you’re hit with the realization that Christmas is almost here! So then you’re making a face like this one: 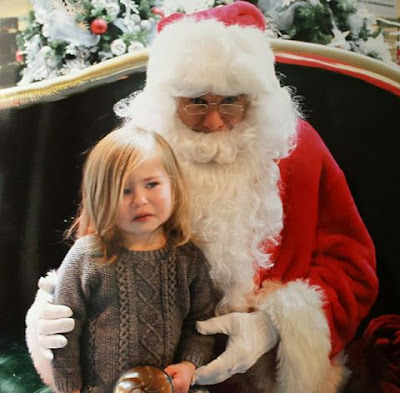 That’s the grandbaby, in case you were wondering. ;-) Hard to believe she’s not quite two, eh?

While she recognizes cartoon Santas and will be the first to tell you Santa says “Ho ho ho” apparently she wasn’t impressed with the real deal. In fact, I’m told that when he said “ho ho ho” to her, she responded by giving him a dirty look and then screamed right in his face (like most toddlers, she’s developed a patented ear-splitting screech to show anger or frustration or sometimes just for fun).

That was pretty much my face yesterday when I made out a list of all the stuff I still have to do before Christmas. Actually, it turned into three lists. One of stuff to do, one just of cookies I need/want to bake, and one of stuff I still needed to buy.

We got about half our Christmas shopping done on the weekend, and came up with a few ideas for people still on the list. But unfortunately, other than getting my lists made, that was pretty much it for me. Oh, no it wasn’t. I dragged out my huge bag of Christmas craft stuff, put the wreath on the front door, and found the Christmas penguins - which the grandbaby loves but her mean mommy won’t let her take them home. Okay, so one of them plays Jingle Bells obnoxiously loudly, but still... ;-)

The hubby got the outdoor lights done last weekend - and he didn’t even cheat! He’d sprung for one of those light projectors that are so popular now, but he also put up the strings of lights around the windows and in the shrubs like he usually does. The projected lights are a lot cooler than I thought they’d be and the way he has it set up it looks like there are lights in the tree in front of our house. Unfortunately, some idiot from the gas company was marking where the gas lines go, wasn’t watching where he was going and knocked it askew. Hubby still hasn’t been able to get it quite right again. It still looks good, just not as good.

Anyway, there’ll be no movie reviews for the rest of the month, but there will be random posting of Christmas videos. Just because I can. :-D

It’s been an exciting 30 days, but I’m happy to report I have yet another NaNo win under my belt. I admit that there were days when I had serious doubts about finishing, but I was blessed with some hefty word counts towards the end there.

I’m not going to go into any more detail than that here - but if you’d like to learn more you’ll need to check out my Other Blog. There's even an excerpt from my story. :-D

But winning NaNo did not come without a price. Save for my daily babysitting, I became a virtual hermit for the last couple of weeks of November. And I missed my sister’s birthday (sorry sis! There’ll be a little something extra in your Christmas parcel). And suddenly it’s December and I’m totally unprepared for Christmas.

So ... other stuff happened during the month of November ...

One of the biggies was that we got a new (to us) car. The old car had a few problems - okay, a lot of problems, one of which was how it would shudder when you came to a stop and often times stalled - but we were hoping it would last at least until the spring. So we took it into the car place and they had a look to see what needed to be fixed immediately and what could wait. AND they finally identified the shuddering/stalling problem.

The problem was, it was going to cost more to fix everything than the car was worth. So in less time than it takes for you to say “It’s going to cost how much?” we found ourselves the proud owners of a 2012 GMC Terrain. It has six cylinders, low mileage, and is fully loaded. And I mean fully. You need to take a course to operate this thing properly.

You can control the volume of the radio - and change stations - from the steering wheel. It has heated seats; a remote starter; memory settings for the driver’s seat. The guy at the car dealership even synced my phone to it - if I want make a call while I'm driving I just press the phone button on the steering wheel and I can call using a voice command. But best of all, it has electronic windows that work! I don’t have to get out of the car to get the ticket in parking lots. I can go through drive-thrus now! It’s awesome.

We also bought a car seat for it so now the grandbaby and I get to go on road trips. Mostly to Walmart and the Dollarama, but we’ve also started going to a drop-in play group. Good times are had by all.

In the building and constructing department ... The hubby finished building the washstand for the bathroom and painting in there has commenced. He also finished the toy chest for the grandbaby - it looks amazing. And if anything happens to her crib her parents can just put a mattress inside the toy chest and let her sleep in that. LOL Sorry I don't have a picture to post but they're on my phone and they need to be cropped and lightened up and it's really late as I type this. ;-)

The other big thing that happened was the hubby gave me a surprise early Christmas present - tickets for us to see Loreena McKennitt at Massey Hall in Toronto. It was an awesome evening.

Unfortunately, the brownie points hubby earned from that were short-lived. It was after this that he decided to use an electric sander on the walls of the bathroom. To be fair, had he continued to do it by hand he’d probably still be sanding, but still ... even with the door closed we have drywall dust everywhere.

For those of you unfamiliar with the dry wall dust phenomena, let me explain. Imagine, if you will, powerful fans blowing throughout your house. Now imagine someone emptying a bag of flour in front of those fans. I think you get the idea.

One of the worst hit rooms with the dust was my office, which is almost right across the hall from the bathroom. Since the danger of more dust is now past, I started the cleanup in there today. I managed to clean the curtains, window, window wall, the top of my bank of three bookcases, and the top shelf of said bookcases. That was it. Have I mentioned I have a lot of knick knacks on those bookcases?

I’m thinking this is a job that can wait until I get some time off between Christmas and New Year’s.