meristic ~ divided into parts or segments

I had all kinds of wonderful things to share...in my head. But now that I’m sitting here at the keyboard they’ve pretty much vanished without a trace. Ain’t that always the way?

It was a pretty up and down week last week. Most of our lovely snow has gone, except for where it was piled up on either side of driveways and mounds left by the snow plows along the roads. What’s left is not pretty snow either, it’s that dirty, crystallized stuff that hurts when you kick it.

As a result of all that rain and melting snow we got, there was a lot of flooding, including our basement. We’ve always had a bit of a water problem in our basement, but over the years the hubby has worked both indoors and out to alleviate it. Now it only gets bad in cases of extreme water, which we had last week.

You’d think with the unseasonal warm we’d get more sun, but alas that is not the case. So instead of being cold and miserable, we were warm (and wet!) and miserable. The forecast is for the warmer temperatures to continue for the next couple of weeks but to be prepared for a winter storm.

Now that I believe, coming from the weather network. The general rule of thumb for my neck of the woods is to expect snow through the middle of March. The March Break is usually good for skiing. And even Easter has been known to produce a flake or two. I can remember some truly magnificent storms when I was a kid, one in particular in April.

People complain about the cold snow now, but this is nothing compared to what it was 30 or more years ago (thank you global warming!). There was more snow and cold, the kind of cold that froze your nose hairs when you breathed in, and the moisture from breathing out froze on the scarf covering your mouth....and less complaining about it. We just took it in stride - it’s winter, you gotta expect cold and snow.

It’s kind of like getting into the pool in the summer. We have an above ground pool. The hubby uses it a lot in the summer; me, not so much (okay, rarely). But sometimes on a warm day I’ll stick my hand in the water and it feels nice...until the hubby checks the temperature and tells me it’s only 74F.

Nope, changed my mind. Not going in. But I might have, had I not known the water was colder than I like (I prefer 78 to 80 - doesn’t seem like a big difference, but it sure feels like it). Maybe not knowing the temperature would be better for us all.

Next time you want to check on the weather, try looking out the window instead of at your weather ap. You might enjoy the day more.

Wherever you are, stay warm and dry.

The problem with a long weekend is that I tend to lose track of my days. Yesterday was a holiday for most people (Family Day for a lot of Canadians, President’s Day for you Yankees) and it really felt like Sunday to me. Which means I’m still late with this post, but at least you’re getting it. :-D

The good news is that the Super Mega Death Cold From Hell has been reduced to a sinus cold (which may or may not be an infection, I’m giving it a couple of days to decide), and my back is pretty much okay again.

The bad news is, my energy resources are depleted. We’ve had a couple of weeks of mostly grey weather, and the temperature has been rising. Yesterday and today are rainy, and the forecast is for more of the same for the coming week. 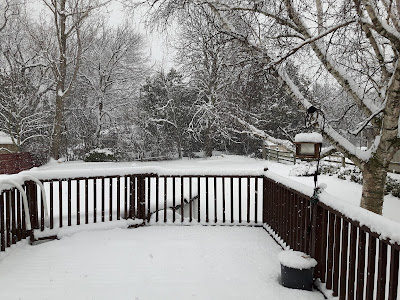 Then we had a week of on-again/off-again snow and last weekend it looked like this outside: 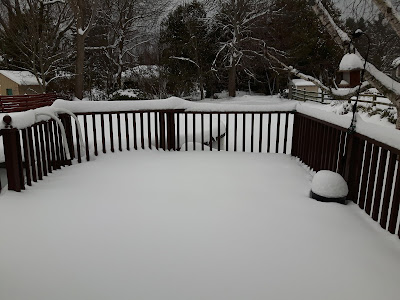 And no, I did not take that picture at night. That’s how dark it was, but there was lots of snow to compensate. However, this weekend it got mild and rainy, and now the deck looks like this: 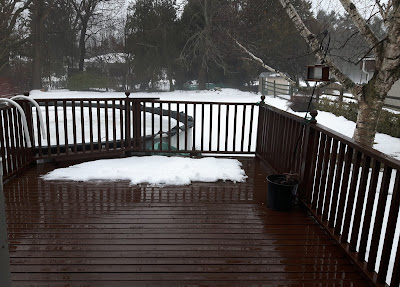 Sad, isn’t it? They say winter’s not done with us yet, but I checked out the long range forecast and over the next two weeks the temperature isn’t even going to go down to the freezing mark, so I have my doubts.

In the meantime, I think the grandbaby sums up my opinion of the weather nicely: 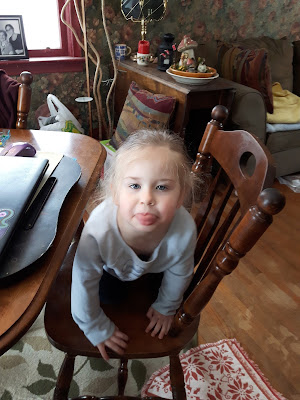 Normally when I have a cold it’s a sinus cold - runny nose, maybe an ear ache, that’s it. Not so with the Death Cold. This time I have head & sinus congestion, coughing, sneezing, watery eyes, fever, chills, aches, loss of energy, loss of appetite. . . . I’m now entering week three of the Death Cold, hopefully the final week (everyone else in my neck of the woods who’ve had it says it only lasts for 2 or 3 weeks).

I did improve somewhat over the weekend - it helped being able to stay in and just relax - but late Saturday I got to add a sore back to the mix. It woke me up early on Sunday morning and I had to break out my trusty heating pad.

Today the back is still a concern (probably from the coughing), the cough has gone from a dry, nagging cough to a deep chested seal bark, and I still have a sinus thing going on. But at least I no longer have to stuff tissue up my nose to keep it from dripping all over.

So knock wood, hopefully I’m on the mend.

I’ve often said I’ve never met a craft I didn’t like, or at least give a try, hence the big storage closet that’s over-flowing with craft stuff even after cleaning it out a couple of times. And there’s nothing like a snowy day to fill you with the urge to pick up a crochet hook or a pair of knitting needles.

My latest endeavor is a vest I’m knitting while watching TV at night. I don’t remember learning to crochet, but I remember teaching myself to knit from a book. I learned to sew from my mother on an old Singer sewing machine that went forwards and backwards and that was it - but it opened up a whole new world of fashion for my Barbies. And I remember her teaching me to embroider long before that so I could achieve my sewing badge in the church group I belonged to.

I had an uncle who did needlepoint - I have a footstool covered with his work, and the daughter has one of the chairs he did. My sisters like to do counted cross stitch, but I find it hard on the eyes. I do like to embroider though, and I have a couple of unfinished quilts made up of embroidered squares. And I’ve had to stop myself from crocheting afghans - I’ve run out of people to give them to and I have more than I can possibly use. :-D

One of my favorite places to visit when I was a kid was Owen Sound. Not because it’s a beautiful city, which it is, but because that’s where Aunt Florence lived. And Aunt Florence was the Craft Queen. She took craft classes and clipped craft sections from magazines and never failed to have a new craft to share.

We made flowers out of crepe paper - big red poppies with black centers, and yellow daisies, and white tulips. Using fabric and starch we made fabric flowers using the same patterns, and she made the Three Wise Men that sat on her mantle-piece every Christmas after that. Then there were the St. Patrick’s Day pigs, made out of styrofoam egg cartons. Easter egg shaped bird’s nests made out of balloons wrapped in string.

I think of Aunt Florence every time I’m in the craft aisle of a dollar store, as I was on the weekend. And despite having a closet full of craft supplies I couldn’t resist picking up a few more. The granddaughter (hitherto to be known as GD) is at just the right age for crafts.

She already loves painting, and likes putting things together. So I’ve laid in a supply of pom poms and pipe cleaners and googly eyes. I even found a couple of craft kits from Christmas stockings past, which we tried out last week but while the school glue I had on hand is good enough for paper, I needed a proper craft glue to deal with pipe cleaners and pom poms.

Naturally, I subscribe to the belief that the best gifts are the handmade ones. So I was thrilled to receive a dragon GD (with a little help from her dad) made me out of an egg carton. Of course hubby immediately started whining that he wanted a penguin made out of an egg carton for his birthday. Well, they didn’t use an egg carton, but they did make a pretty impressive penguin. 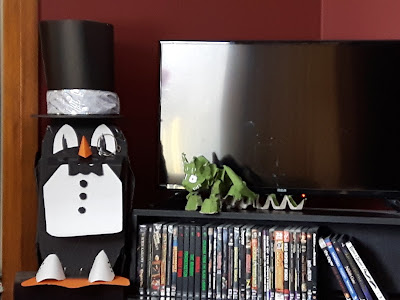 Aunt Florence would be proud!