multivoltine ~ having several broods in one season

I know that this might be a little hard to believe, but the kitchen is…

Feel free to throw confetti and have a happy dance. The contractor was in last week, put the trim up around the tops of the cupboards and the new door on the cupboard beside the stove. Done, done, done!

It’s been a long (super long) haul, but I have to admit it’s been worth it. You can have more than one person in the kitchen at a time and not trip over them. It looks so pretty, and it’s organized, and while because of the shape and style of the cupboards I don’t know that I’ve got more cupboard space, I definitely have a lot more counter space.

So…let’s start with the sink that looks out over our fabulous backyard. Here’s the before picture (more or less): 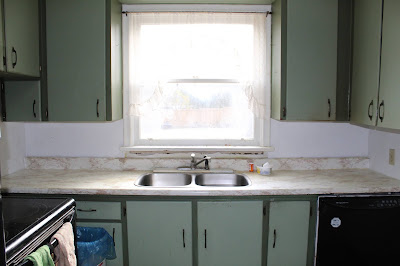 I really wish I’d taken before pictures before we cleaned everything up, because trust me, the counter and window ledge was never that clean. It was pretty cluttered, which was one of the things we wanted to get a handle on. And here’s the sink counter now: 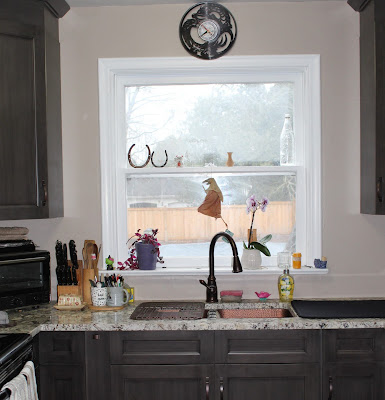 You notice we’ve left the curtains off – we really like the extra light. And while I may add another plant on the window ledge, we really want to keep it as uncluttered as possible. I can picture brackets to hang plants from on either side of the window, but the hubby can’t so we’ll have to see who wins that debate.

Going to the right, we go to the counter beside the sink: 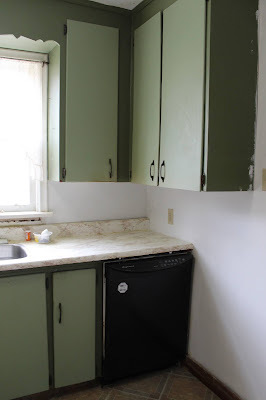 Because of the placement of the dishwasher, there was a lot of wasted space in this corner. But this was one of the things the renovation dealt with admirably. 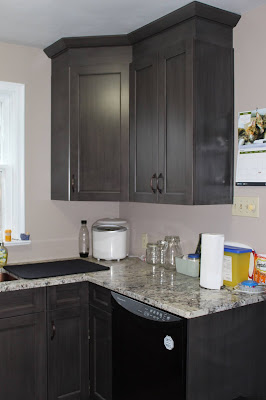 The star of this corner is the lower cabinet, which opens up to a lazy susan on both levels (sorry, no inside picture). And moving the dishwasher to the end of the wall gave us extra counter space.

Moving on to the right of the sink, we have the refrigerator/stove side of the kitchen: 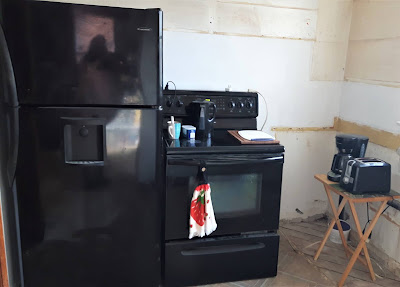 I really regret not getting a proper before picture. You can see the lines on the walls where the cupboards were, and there was enough space between the stove and the counter for our tall, narrow recycling and garbage bins. The lower cupboard was another great waste of space, and really hard to get to. 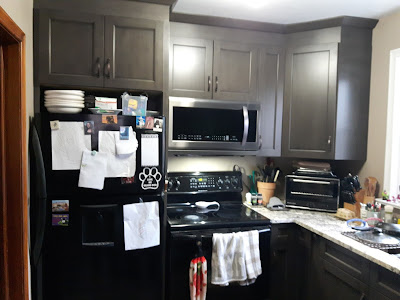 The new countertop is wider than the old one, which means we lost the space for the bins beside the stove. The picture’s kind of dark, but there’s a narrow, bi-fold door beside the stove that lets us into a huge space that’s perfect for storing my rarely used appliances – the George Formans, indoor barbecue, and indoor grill on the top shelf, and things like the blender, food processor, and spiralizer on the bottom shelf.

We used to have the microwave on the counter in the corner where the toaster oven is now – it’s so much handier to have it above the stove. And it comes with a built in hood fan, which we never had before. Because the fridge is in an alcove now, the cupboard above it is much deeper. It holds both my crock pots, and my collection of baskets (that I rarely use, but couldn’t seem to part with).

And finally, we come to my favourite section of the kitchen, the coffee counter. 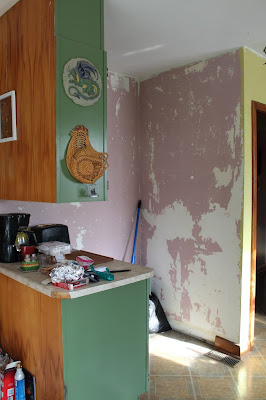 Again, the picture doesn’t do justice to the former ugliness. Along that bare wall was more or less a bookcase with doors that we used as a pantry, and above it were shelves that held the appliances we now have in that corner cabinet beside the stove. It was a really tight fit if you were making toast or coffee, or wanted anything from the cupboards.

And look at it now: 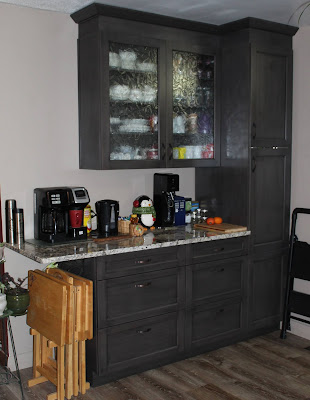 Even with the coffee maker, tea kettle, cookie jars, and soda stream on the counter, there’s still plenty of room to work. The small, upper drawer on the left holds tea, and the coffee pods for the coffee maker. The larger drawer below that holds most of my baking accessories, the one on the bottom the rest of my baking stuff, cat food, and spill-over from the pantry.

On the right we have cutlery on the top, bread, hot chocolate, and excess tea in the next drawer down, and our brand new set of T-fal pots and pans in the bottom drawer.

The kitchen is officially open for business!

Email ThisBlogThis!Share to TwitterShare to FacebookShare to Pinterest
Labels: finished renovation, weekly update, what I've been up to 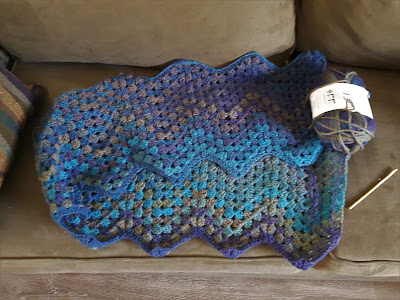 I’ve been plugging away at getting the bins emptied and out of the office, and I even managed to unbury the couch and dining room table. My kitchen is about as organized as I can make it, which is pretty darned organized if I do say so myself.

One of the things I’m rather proud of … We have this small, free standing wet bar in the dining room that I’ve been using as a plant stand. It has a handy drawer up top and two shelves down below. The top one has slots in the top to hang wine glasses from, and below a wooden X divided the space, presumably to hold wine bottles.

The X wasn’t attached to anything inside, so I took the back off the stand and pulled the X out. My plastic bin full of flower pots fits perfectly in the bottom space, and the shelf above holds my bird seed and peanuts for my feathered friends, as well as a plastic container for the summer stuff that was in the drawer – sidewalk chalk, bubble stuff, sun tan lotions. The drawer now holds dining room stuff – hot plates, napkin rings, place mats.

Seeing as we’re not putting the carpet back down in the dining room, the hubby decided we needed to protect the floor from the table and chair legs. So I got little felt disks that self-stuck to the bottom of the legs. However, we still can’t really sit at the table because on one side we have the ever growing pile of donations, on the other (on the floor) is the old microwave that needs a new home, and behind it (against the wall) are the two rolled up carpets, the two previous (wrong) orders of trim, and the big mystery panel.

I can, however, use my office again. The pink wing chair that was taking up way too much space in my office has replaced the stack of bins in the hubby’s office. It’s still a little messy, but I can work at my desk and even sit in my reading chair if I want.

Now that I’m pretty much done with the kitchen I have some free time on my hands and I’ve been using it to work on an afghan. I’ve had the urge for a while now and finally gave in. But rather than dig through the craft closet to get to my yarn stash, I bought some fresh yarn at Walmart. Of course they didn’t have as much as I needed, but it was enough to get me started and I ended up ordering the rest that I needed online.

I was originally going to get at least one other colour to do a pin stripe every few rows, but this yarn, being variegated, makes its own stripes and I rather like it the way it is.

Guess I’ll just have to figure out something else to do with the purple yarn I added to my order.

Email ThisBlogThis!Share to TwitterShare to FacebookShare to Pinterest
Labels: crafting, organization, weekly update, what I've been up to 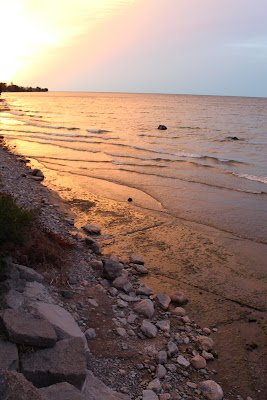 That’s it. That’s all I got. The above picture is one I took last year of the sun rising at the lakeshore – I haven’t even been doing anything picture worthy lately.

Now that the renovation is pretty much over, there’s not a lot of excitement around here. We’re out of the lockdown – I think we’re in orange now – but we’re still not getting out much. We went to Home Depot last weekend and picked up the two missing door pulls for the cupboard above the microwave . . . which, because of the microwave plug inside of it, is pretty useless.

I’m still really loving all that shiny counter space. The new kitchen layout gives us more space to work with – we can both be doing stuff in the kitchen at the same time without tripping over each other, which is nice.

But the emptying of the bins and the putting stuff away is slow going. I’ve been plugging away at it but there’s just so much stuff! I really can’t figure out how it all fit in the old kitchen in the first place.

When I was filling the bins in the first place I got rid of a lot of stuff – some of it that was still usable got donated, and a lot of it just got chucked. I have two big boxes and one plastic bin of stuff destined to be donated, and yet there’s still at least half a dozen bins still stacked up in the office waiting to be dealt with.

I’ll tell you something truthfully. We may have gained in counter space, but we lost on cupboard space. The lower cabinet beside the stove, despite its tiny opening, is more usable, and a lot of the stuff that used to be in it has been disposed of. But the upper cabinets on either side of the sink, because of their wedge shape, don’t hold nearly as much. And the other upper cupboards aren’t as deep, which really makes a difference.

I’m still trying to keep things organized which means a lot of shuffling stuff around. And I really, really need some kind of a stool so I can reach those upper shelves.

My baking dishes (cake pans, cookie cutters, etc.) ended up taking up a drawer and a half, but it’s all in one place, which is nice. The glassware has been washed and put away, and is going to be moved to a different cupboard this week. One set of my good dishes is in half of the cupboard with the glass doors, but I think the other set will probably end up staying in a bin for now.

Like I say, it’s slow going but at least it’s going. And the stack of empty bins is slowly getting bigger.