mungo ~ waste produced in a woollen-mill

Did anyone catch my little faux pas last week?

I wrote a post for my other blog later on Monday and accidentally posted it here. It was up for almost an entire day before I realized what I’d done.

Well, the first true sign of spring arrived. Just as I was taking up supper, I spied a flurry of motion out the kitchen window and watched as Daphne and Donald landed in our pool. Of course the cover is still on it, but there was just enough unfrozen water for them to land in. 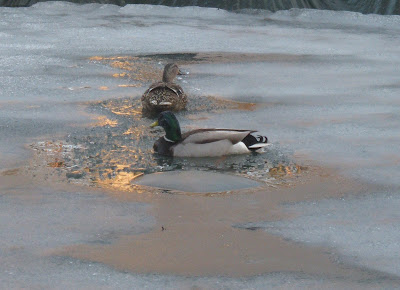 That’s actually a picture from a couple of years ago, but it’s the same pool and same ducks. I just couldn’t stop what I was doing to get a current photo. Picture the same scene only with a little less ice in the pool. ;-)

But it gives me hope that we’ve seen the last of the snow for this year.

In the ongoing saga of my ear ... I managed to get an appointment with the nurse at my doctor’s office, who had the doctor look at me, who set me up with an ear/nose/throat specialist. He held a tuning fork up to my head and said that currently I’m hearing through the bone on the left side of my head, not the ear, which is apparently a good thing.

At least it was good enough that he’s not going to put a tube in my ear. There is a hole in the ear drum, but it’s already started to heal. He’s pretty sure the fluid in my ear will dry up without help and my hearing will come back on its own, but if it doesn’t I’m to call his office directly to make another appointment.

Meanwhile, I’ve finished my second round of antibiotics and I still can’t hear but at least the railroad spike pain is gone. :-)

Julius, our poor sick kitty, seems to be doing a little better. Although he doesn’t appreciate being force-fed (no more than I like having to do it to the poor guy), I think he feels better having eaten. Because he’d been starving himself, we decided to start him with the steroid that’s supposed to ease the internal inflammation, and build his strength up a bit before starting him on the cancer drugs (which can have harsher side effects). He’s been tolerating the steroid well and today I start him on his cancer fighting drug.

moulinet ~ machine for bending a crossbow

I woke up to a weirdly orange sky this morning, like the light was being filtered through tangerine koolaide. It was enough to make me do a double take. By 7:30 or so the light was returning to normal but still, you have to wonder what caused it.

You notice I didn’t say when the sun started coming up. That’s because it’s almost 9 a.m. as I start this and I’m still waiting for the sun. It’s kind of grey and gloomy out there, especially since it’s the first day of spring and all.

You also might have noticed that I kind of skipped last week’s post. Mostly it was because I’m feeling pretty stressed out lately. So prepare for a somewhat whiny explanation. ;-)

I’ve had enough colds and flus this year that I’m seriously considering getting the flu shot in the fall - and I don’t believe in the flu shot. I blame the day care I’ve been taking the grandbaby to on a regular basis. Or more specifically, I blame the parents of the runny nosed, sniffling little plague rug rats we encounter there. See, the day care/play group is part of the local YMCA. And if you’re a member, you can drop your child (under the age of 6) off for free while you go work out. And apparently these parents don’t give a rat’s ass who their precious little germ factories infect as long as they get their workout in.

My latest is a really, really bad sinus cold that was on top of a speck of something I got in my eye that became infected. So off to the walk-in clinic I went where the doctor gave me drops for my eye and told me my sore throat was due to swollen glands, and did not give the rest of the cold a second thought. Had he checked my ears, it might have prevented what happened later that night.

To make a long story short, my sinuses worsened, my left ear started really aching, and finally the sinus pressure blew a hole in my eardrum. Looking on the bright side, at least it helped alleviate some of the pain. Back to the walk-in clinic the next day and the Doogie Howser-esque doctor looked in my ear, recoiled, and said he’d never seen such a mess. Charming.

Yesterday I finished the antibiotics he prescribed and he said if my hearing hadn’t returned in a couple of days to see my family doctor. Trust me kid, if it was that easy I’d have gone to her in the first place. However, my hearing isn’t back so I’ve been dutifully hitting the redial on the phone since 9 a.m. only to get through and find out that my doctor had to cancel her appointments for the day and all the emergency appointments were gone. Better luck next time.

Added to this stress is the fact that one of our cats has taken ill. He’s the sweetest natured of the bunch, and after blood tests and an ultrasound (which required two separate trips to the vet for the poor guy) it was determined he has cancer. He has between 20 and 30 nodules on his liver and spleen which have caused inflammation which in turn caused him to lose his appetite.

The big thing right now is to try and get him to eat. I’ve bought a variety of foods for him, some he shows interest in and some he doesn’t. And of course the other cats are a little miffed at the preferential treatment he’s getting. It’s a stressful situation all around.

And the thing is, I don’t deal well with stress. Pressure, yes. I actually work well under pressure, like the pressure of a deadline (just don’t bug me while I’m working). But stress will shut me down every time. I don’t deal with stress - stress deals with me.

But in any case. It’s the first day of spring, even if it doesn’t look like it out there. So sunnier, happier days are sure to be ahead.

meteorism ~ abdominal cramps and swelling due to flatulence

You ever have one of those brilliant ideas that turn out to be not so brilliant after all because it has a ripple effect that had you thought things through a little better might have been enough to make you think twice? Yeah, that was me yesterday.

I mentioned a couple of weeks ago about how I wasn’t happy with the orchid on my kitchen window sill and was considering moving it. Sounds simple enough, doesn’t it? Well, this particular simple thing took me half a day.

The little table I was thinking about moving it to had a very large ceramic pagoda which had to be relocated. First I thought it could go up on the bookcases in my office. So I got up on the step stool and shuffled things around and the pagoda fit - just barely. But it looked terrible up there.

So then I figured it could go on the bookcase in the upstairs hallway, which was lower and wider. I took the pagoda apart, took it upstairs, and removed the large ceramic knight on his horse and the dragon he was fighting from the shelf. The insanely dusty shelf.

Naturally I dusted the shelf off before reassembling the pagoda, which looks great up there, especially since the opposite shelf has a Chinese doll in a case and mythological beastie. However, I couldn’t just have one clean shelf, so I ended up dusting off the rest of the rather large bookcase. And the books on it.

At this point moving the orchid was simple, but the one drawback of the table is that it sits between the cat tree and the bookcase in the dining room, and the cats like to use it as a gateway to the plants on top of the bookcase. Which is why the pagoda was there in the first place, to block their passage.

So to kill two birds with one stone, I decided to plant the sweet potato vine in a small planter box and drape it over a bamboo trellis I just happened to have. This necessitated finding my planting stuff in the depths of the basement - no mean feat in itself. I found a partial bag of dirt that had just enough for the vine planter, but not for the pineapple that is also growing hydroponically.

Now, the sweet potato vine has been growing for several weeks, and it kind of grew up around the other plants on the window ledge. It even had a shoot wrapped around the stick in the orchid pot. And another that was wound around part of the window. And several tendrils were growing up and intermingling with the hanging plant above it. In retrospect, it might have been easier to just leave it there.

But all’s well that ends well. The orchid is in its new home, the sweet potato is in its new pot, and the plant hanging in the kitchen window received a much needed divesting of dead matter. 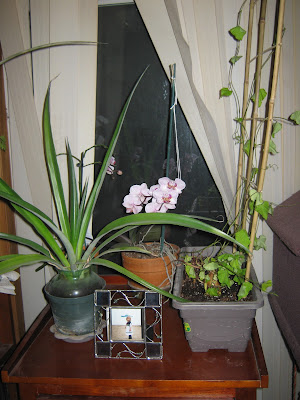 I don’t know if you can tell by the picture, but the sweet potato vine looks a little wilted. In my defense, it was already wilting before I planted it in dirt. I’m not sure if it didn’t like the sun we were getting, or if it was just tired of being hydroponic. I’m hoping it’ll be happier in dirt, and the blinds should shade it a bit from the sun.

But I guarantee you, I will think twice before deciding to move a plant again. :-D