Once again I got caught up in the whole mythos that a new year means a new beginning and this year will be different. It’s not really. It’s the same old, same old, only further along in the calendar.

So . . . I guess since January is almost over I should start posting again, starting with a recap of how I rang in the new year.

We spent the holiday weekend here: 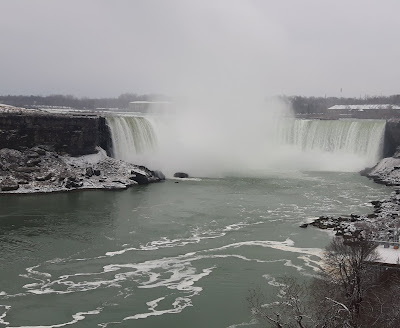 It was cold and wet and unless you’re into wax museums, fun houses, or casinos (which the hubby isn’t) there isn’t a whole lot to do there. If it had just been cold we would have done a lot more walking around, but it rained most of the time we were there.

The TV in our room got maybe 5 channels, and 3 of those were sports networks. And while I did bring a book with me, I finished it by the second day. That’s when I made a horrifying discovery. THERE ARE NO BOOKSTORES IN NIAGARA FALLS!

I asked at the front desk and they just stared at me blankly. I could almost see the wheels turning – “book? What is book?” Not only are there no book stores, there are no books, not even in the convenience stores. There were no books, there were no magazines, there weren’t even any newspapers. Do the people in Niagara Falls not read???

Mental note: Do not go on vacation anywhere without an e-reader.

New Year’s Eve we were going to have dinner at one of the restaurants on Clifton Hill (where all the action is) and made it as far as the hotel lobby. It was pouring rain so we quickly changed our plan to dining in the hotel’s restaurant.

To our surprise, despite the rain the nine o’clock fireworks went off. Later on the rain had let up so we ventured down to the bottom of the hill with about a million other people to watch the midnight fireworks (it started to rain again before we got there so we bought an umbrella from one of the souvenir shops). 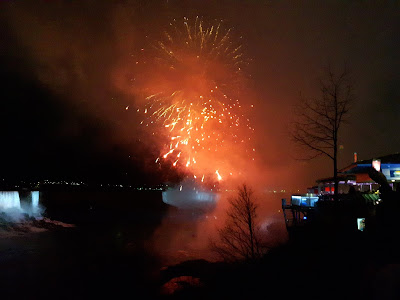 The only other thing of note during my absence was the grandbaby’s birthday. My little sweetie is now four! Can you believe it? 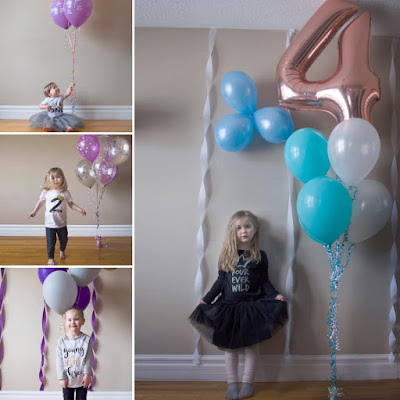 Guess I’ll have to stop calling her “the grandbaby, eh?