Confessions of a Craft Hoarder

At the end, all that's left of you are your possessions. Perhaps that's why I've never been able to throw anything away. Perhaps that's why I hoarded the world: with the hope that when I died, the sum total of my things would suggest a life larger than the one I lived.
― Nicole Krauss

There's even a name for the people who have the most stuff. They're called hoarders. Back in the day they were just called grandmothers.
— Ellen DeGeneres

Well . . . on the weekend, the daughter and I went shopping. I actually had a good reason for stopping at Fabricland. Earlier in the week I bought some fabric for a dress I’m making the granddaughter for the father/daughter ball she’s going to in June. Actually, I had two different pieces of a medium pale blue, one organza and one lace, but they needed lining. Now I had bought an off white to line them with which would look very nice, but the granddaughter had asked for a darker blue, which they didn’t have in the store I’d originally gone to.

Turns out, neither did Fabricland. They did have dark blues, but they looked terrible with the medium blues. It’s probably just as well, the off-white will help tone down the vividness of the medium blues.

I did, however, find a print material for the in-between squares of the baby quilt I’m working on, and some lining for a tote bag I’ve been working on for years. Now all I have to do is figure out how to finish it. LOL

But then we went to Michael’s Craft store, because how could you not? Among other things, I picked up a bit more embroidery floss, and a plastic case to store it in. Technically, it’s meant for beads, but I figured it would work for thread too. And it sort of does, but you need to make sure the lid is snapped shut tightly.

Then I hit the dollar stores because the granddaughter and I were planning on doing some Easter crafts. Well, I shouldn’t be allowed in dollar stores any more than I should be allowed in craft stores. I got some Easter stuff, sure, but I also got a bunch of little wooden charms (for want of a better word). What I will be using these for I have no idea. I already had a bunch I didn’t know what to do with. *sigh*

But I also found a smaller (much cheaper) version of the craft box I planned on using for my embroidery floss. It wasn’t meant for thread either, but it worked much better. So I bought a couple of them and spent a considerable amount of time winding embroidery floss onto cardboard bobbins to store in said boxes. As for the original box I bought, never fear, I’ll still be making good use of it for other things.

I had just been kind of throwing this influx of craft supplies into my two stitchery bins, but I took the time to organize them properly – embroidery and cross stitch in one bin, beading and applique in another. But it was when I was winding the embroidery floss that I realized it’s just possible that I have a slight hoarding problem when it comes to crafting supplies.

Merriam-Webster defines hoarding as “the practice of collecting or accumulating something.” Yup, sounds like me all right. I’ve got all this thread that I really don’t need but I keep collecting. And you should see the case that holds my beading supplies.

But while I may accumulate a lot of “stuff,” at least I haven’t tipped over the edge into a hoarding disorder.

Email ThisBlogThis!Share to TwitterShare to FacebookShare to Pinterest
Labels: collecting, craft supplies, shopping, what I've been up to

A Stitch In Time

Work done by you with unconditional love and pure devotion goes straight in the category of divine and immortal craft.
— Seema Brain Openers

In crafting there are no mistakes just unique creations.
— Anonymous

Crafts make us feel rooted, give us a sense of belonging and connect us with our history. Our ancestors used to create these crafts out of necessity, and now we do them for fun, to make money and to express ourselves.
— Phyllis George

To be honest, there hasn’t been all that much exciting going on. A lot of reading and a lot of stitchery.

Tuesday my stitchery guild had its first in-person meeting in two years. And seeing as it was a “stitch and show” meeting, where we show off some of our work, I figured I’d better finish up a couple of things so I had something to show. I started off with my challenge piece: 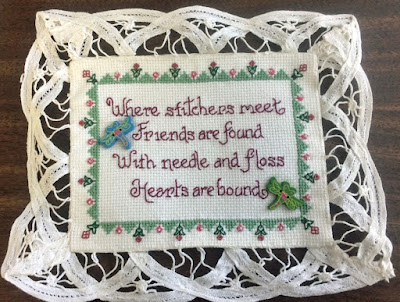 Early in the year one of the ladies from the group came around with a little gift back that had a pattern and some aida cloth in it. We were challenged to use our own coloured thread and embellish it any way we wanted.

I started out using three strands of thread but it worked much better with two. And the little triangles around the border just about killed my eyes at first, but then I got into the rhythm and it wasn’t so bad. I admit I don’t do a lot of cross stitch because I do find it hard on the eyes.

You can’t really see them well, but I sewed a crystal bead in the center of the little pink flowers. The dragonflies came from the dollar store – a great place for craft supplies. When it was done I thought it looked rather plain and I thought framing it in lace was a great idea. Unfortunately, the first lace I used was too stretchy and looked horrible. It took me forever to get it on there, and almost as long to get it off again. The lace in the picture came from Fabricland and it was just a happy coincidence that it worked.

This next piece was something I actually did several years ago: 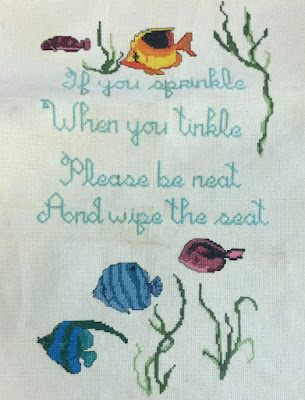 I did it for our downstairs bathroom and just need to frame it.

Then I pulled out some strips I’d done for fun and always intended to turn into bookmarks: 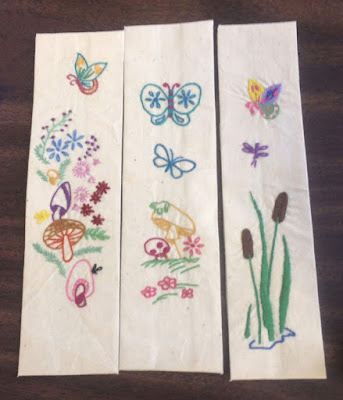 All they needed was a good press with the iron and a backing put on them.

Not shown is the name tag I came up with. I used black aida cloth and red thread. It’s a simple thing, just my name, but it looked so plain that I dressed it up a bit with red glass beads around the edge.

So last Monday I went to Michael’s Craft store. It’s amazing how quickly things add up at the craft store. The biggest purchase was embroidery floss. Once upon a time I had the embroidery floss I’d collected over the course of more than 20 years, all wound neatly on cards and stored in a plastic box. I wrote the colour numbers on the cards, and everything was in numerical and colour-coordinated order.

Somehow I have lost the box. I’ve searched everywhere I can think of – gone through the craft closet several times – but there’s no trace of it. It’s going to take hundreds of dollars, and probably years, to replace all that thread. Some of it can’t be replaced. But I’ve made a good start, and I’ll just add to the new collection project by project.

The one thing Michael’s did not have were embroidery transfers (the pictures on paper that you can just iron onto your material to embroider). I’m doing a baby quilt with pictures I traced out of a colouring book, but it’s not really an ideal way to do things. Neither is using carbon paper or the similar paper used for transferring dressmaking marks.

So when I got home I went online and ordered several embroidery transfer sets from Amazon, as well as a set of pencils that you can trace a picture with and then iron it onto your fabric. In essence, you’re making your own transfer.

You’d think I’d be all set to dive into my stitchery now, but I really need to finish the afghan I started. I’ve only got about a third of it to go, so hopefully I can finish it this week.

Email ThisBlogThis!Share to TwitterShare to FacebookShare to Pinterest
Labels: craft stores, stitchery, what I've been up to
Newer Posts Older Posts Home
Subscribe to: Posts (Atom)