monoptote ~ word with one form for all cases; indeclinable noun

Yesterday a friend and I made a pilgrimage to Toronto to the 29th annual Word On the Street. This is a festival that celebrates the written word, from publishers to authors and everything in between. 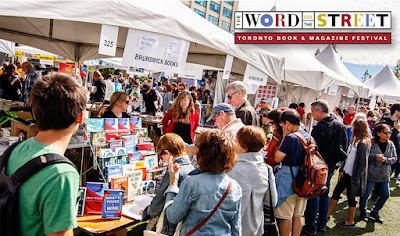 This wasn’t the first time I’ve been to this event. In fact, the first time I went it was with the same friend. We drove up to Toronto and parked at the Yorkdale Mall and took the subway to Queens Park where the event was held.

I don’t know when they switched the venue from Queens Park to Queens Quay, but that’s where we had to go this year. I will say one thing about the move, it’s easier to get to. We drove to Oshawa (about halfway between our town and Toronto) and took the GO train to Union Station. From Union it was just a few blocks worth of a walk to the waterfront – actually, very close to where the hotel the hubby and I stayed at when we had our holiday at the beginning of the summer.

Although we agreed that it wasn’t as nicely laid out as when it was in Queen’s Park, we still had a good time. And I managed to come home with a pile of loot: 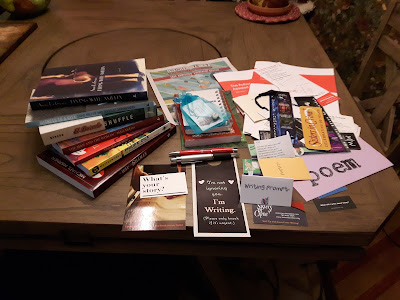 You can click on the picture to see a bigger version of it, but basically, the stack of books on the left are ones I paid for (at greatly discounted prices), while the rest of the stuff was freebies.

Several things have changed over the years. One was a greater presence of poetry. There were whole booths devoted to poetry, not just the occasional book, and I received several free poems – one was a tiny little scrap of paper in a tiny envelope, it was really cute (the presentation, not the poem).

Another thing that changed was a greater self publishing presence. It was so long ago when we last went that there was still a stigma attached to self-publishing. This time around there were a lot of micro presses and self publishers, as well as booths advocating self-publishing and offering all kinds of information.

One of the things I liked seeing best was the number of writing groups with booths. Some of these offered classes (with draws to win a spot), some of them had information about meetings, and most of them had writing prompts to give away. There really was something for everyone.

We came away footsore but happy, although we didn’t think it was as big as when it was at Queens Park. After I got home and was looking at my map (which was a freebie that I just stuck in my bag) I discovered the reason why. There was a long building that went from the road to the waterfront – we never went past the building but apparently there was a whole other section of booths on the other side of it. And a lot of stuff inside the building as well.

mensuration ~ measuring to find the dimensions of things

It’s the most wonderful time of the year.

No, I’m not talking about back to school, although for any parent with school age children I’m sure this is true. I’m talking about apple season. 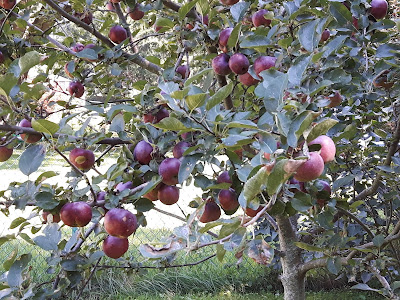 We live in apple country. Drive along a country road in any direction and you’re going to find yourself surrounded by apple orchards. And where there’s an orchard, there are road side stands selling apples by the bag or by the bushel.

Apple pie… is there anything that smells better than an apple pie baking in the oven? The sweetness of the apples, the spiciness of the cinnamon… Do you like your pie with a dab of ice cream or a wedge of cheddar?

My neighbor gave me a bucket (that’s right, a bucket!) of apples at the end of last week and I didn’t get a chance to do anything with them on the weekend, so they’ll be an ongoing project for the week ahead. I’m going to start with apple tarts, then a pie, and figure out what else when I see how many I have left.

The daughter also has a small apple tree and you would not believe the apples she has on it this year. Well, maybe you would. That’s her tree in my picture. ;-)

In honor of apple season I’m going to share one of my favourite apple dishes – fried apples. It goes great as a side with pork chops or over ice cream. Oh, and the reason it’s for one is because the hubby doesn’t like apples. LOL

Fried Apple (for one)
1 tablespoon butter or margarine
1 tablespoon brown sugar*
1 large, tart apple – granny smith or mackintosh – cored and sliced
Cinnamon & nutmeg to taste
*because I’m diabetic, I use less sugar or sometimes substitute maple syrup
Instructions:
In a non-stick skillet, melt butter. Add brown sugar and apple slices. Sprinkle with cinnamon and nutmeg. Cook over medium heat, stirring frequently, for about 20 minutes or until apples are tender.

You know, this being Canada and all, you’d think we’d be used to the extremes in temperature, wouldn’t you? Well, I don’t know about anyone else, but this weekend sure took me by surprise. We went, literally overnight, from stupidly hot and humid to really cold and dreary.

To give you an idea of how much the temperature changed…Friday the hubby went swimming in the pool and the temperature of the water was 78F (roughly 25.5C). Sunday morning I checked the water and it was 65F (about 18.3C). Friday we were wondering why the air conditioner wasn't working better, Saturday we used no a/c, not even the fan, and were forced to shut the deck door because of the cold.

However, if I’m going to complain about anything to do with the weather it’ll be that despite the cooler temperatures we’re still not getting any sun. Saturday it tried, and as I was feeding the cats shortly after 6 a.m. I couldn’t help notice how pretty the dawning light in the sky was. So I picked up my camera and headed down to this point in our neighbourhood that juts out into the lake to take pictures of the sunrise. 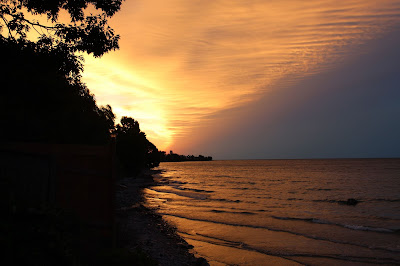 So apparently, we live in some weird curvature of the earth where you can’t get a good picture of either the sunset or the sunrise. Last time I tried to get a picture of the sunset I went down to the lake but west was a little further north than was good for taking pictures. In that case, you’d think the sunrise would be a little further south, meaning over the lake, but as you can see it was not. Next time I’ll have to leave a little earlier and go down to that point you see sticking out even further than the one I was on.

I’ll get that sunrise picture yet! 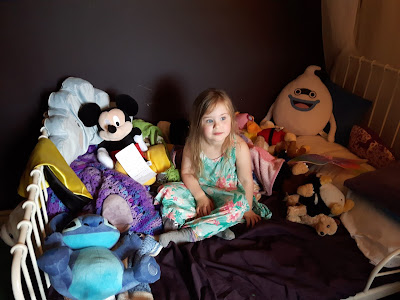 I have to tell you. Being a grandmother is nothing if not an adventure. The best part is the unconditional love, along with unlimited hugs and kisses. But seeing her grow and change – man, it’s awesome!

She’s only 3 1/2, so she doesn’t start kindergarten until next fall, but she will be going to preschool three mornings a week this year. And thank goodness for that because she needs an outlet for all her energy. She sweet and kind, but also stubborn, but she’s also very polite. If you’re trying to get her to do something she doesn’t want to, it’s usually, “No thank you,” not just a resounding no.

And this is not just a doting grandma’s opinion, but the kid is smart, too. She knows how to spell her name and can recognize a lot of other letters besides. She can count past ten. And she has a memory like an elephant, so be careful what you promise her.

At the request of my neighbor (who just loves her), I brought her over for a play date with a little girl who was visiting on the weekend. This kid was older, she’s starting school in the fall, and didn’t seem keen on meeting new people. It took her a while to warm up to GB (grandbaby), and then when they were playing with some playdough she seemed a little taken aback when GB was using these blobs of colour to act out little stories. What, did the kid not have any imagination?

I was kind of worried that GB’s feelings might have been hurt with the kind of cool reception she received – she’s insanely friendly and figures everyone else in the world is too – but I needn’t have. As much as GB loves to play with other kids, she makes her own fun wherever she goes.

She loves to sing and dance (she picks up the songs from her favorite Disney movies in a heartbeat) and I’ve never met a kid with as big an imagination. Whether it’s using the coffee table as a bridge between the couch and the love seat because the carpet is water, or lining up chairs to sit her toys on for a bus, or having in-depth conversations with her invisible friends, GB is definitely never boring.

But I have to tell you, the wonders of grandmahood kind of dim in the face of the eternal question “Why?”

“Why is he doing that?” usually asked about a cartoon character.

“Why do I have to eat my lunch before I get a tiger cookie?”

And the list goes on. But it’s not just the questions, it’s the constant babble. I love my grandbaby dearly, but she never shuts up! And it’s not even just a 3-year-old’s nonsensical babble, this kid actually makes sense. She’s telling a story, or explaining something, or giving you her opinion on something. It’s exhausting!

We were watching cartoons one day and one of the characters was having a quiet time. I asked GB why she couldn’t have a quiet time and she told me, “Because the sun is up, Grammy.”

I guess that answers my question.