montre ~ visible pipes of an organ

Why yes, I did miss last week’s post. That’s because in Canada it was the Thanksgiving weekend and I was recuperating from the humongous dinner I made. Normally I try and get this post written Sunday night, but I spent all day in the kitchen getting dinner ready and by the time I got to sit down afterwards, I just didn’t have the energy. And Monday I just forgot.

Dinner was pretty darn good if I do say so myself. The turkey was moist (for a change) and I got most of the grunt work done well ahead of time. Made a big difference spreading the work out over the day instead of rushing around trying to get everything done at once. I had my four side dishes in foil containers, so when the turkey came out of the oven, they went in to reheat. Worked like a charm. And made clean up a little easier too.

The carrots and beets we had with dinner came from my own garden, although to my chagrin I had to buy green beans at the grocery store. If you’ve been following my gardening progress you’ll know the beets were pretty small, and it took the entire crop for the dinner.

I used up all my carrots as well, as tiny as they were. They were so small I couldn’t peel them, I just scrubbed them really well. It was a lot of effort to go to for a single pot of carrots. If they’re this small next year I’m going to save myself the trouble and use store bought!

The nice part about being so well organized was I had a nice chunk of time to socialize before dinner. Usually everyone gets here and I can hear them talking and laughing in the living room while I’m chained to the stove. Figures that this year I was ready to be sociable and they didn’t arrive until right before dinner.

As you may know, the daughter’s birthday falls on Thanksgiving weekend, and her birthday cake of choice is cheese cake. It started out with a peanut butter cheesecake, which was really yummy, but the last few years she’s branched out to different flavours, thanks to the internet.

This year’s cheesecake was a white chocolate, lemon cheesecake: 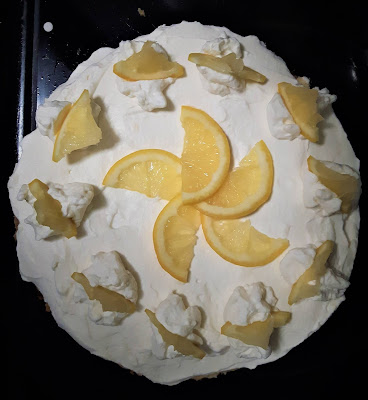 This one had a shortbread crust (with lemon zest), and I whipped my own cream for the topping. It turned out pretty good if I do say so myself.

Remember the purple passion plant that got banished to the outdoors and did so well I brought it back in? Well, it’s a good thing I kept it away from my other plants. Apparently the aphids liked the great outdoors as well, but they like being in the house even more. I sat the plant in the sink and sprayed it within an inch of its life with diluted dish soap, which seems to have done the trick, but I’m not taking any chances. It’s still in isolation and I’m checking it daily.

If the aphids come back I’ll spray it again and maybe try changing the potting soil, just in case the little buggers are burrowing in to escape the soap. And if that doesn’t work, I’ll try a commercial bug spray. I really do like that plant.

The nights are getting steadily cooler – maybe it’s time to think about bringing that wandering jew in as well.

They say a picture’s worth a thousand words, and since I really don’t have much to say about last week I figured it was time for another picture post. :-D

The first two pictures are ones I took down at the waterfront a few weeks ago when I went to meet my friend. Our beach was fenced off for the summer to keep the non-socially distancing tourists away. Despite the fact this meant the locals weren’t able to use the beach either, most of us were okay with that. Just because the beach had a fence around it didn’t mean it couldn’t be pretty though. 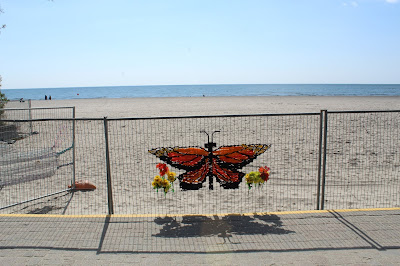 One of the local artists took it upon herself the spruce up the fence with some woven artwork – these two pictures were taken at the east end of the fence, but there were others as well. As I understand it, the feathers weren’t part of the original art, people just started adding them. 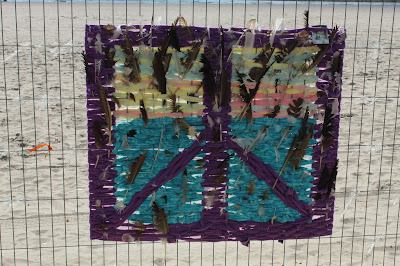 And as you can see, the rules have been relaxed a bit now, and the beach is open through the week and closed on weekends.

And remember those plants I banished to the great outdoors because they picked up aphids? Well they actually flourished outside this summer. The weather has turned a bit cool and the one plant was so beautiful I figured I’d bring him back in. This is my purple passion plant, and while I think he’s happy to be inside again, he’s going to stay by himself until I’m sure he hasn’t brought any friends in with him. 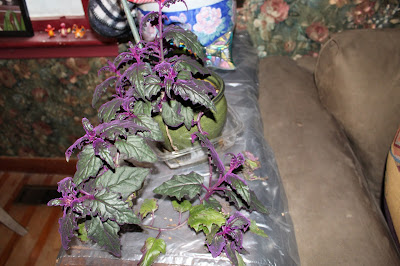 The wandering jew is still outside because he ended up planted in a pot with a couple of other plants (which are not houseplants) and I have to find a pot and some dirt for him before I bring him back inside.

The next three pictures are of the basement. It’s pretty much done, except for the furniture. We’re expecting a reclining love seat sometime today, so at least the hubby can go back to watching TV, but the rest of the furniture isn’t due until November. You, know, right in the middle of the kitchen reno. 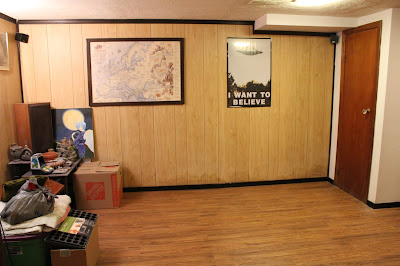 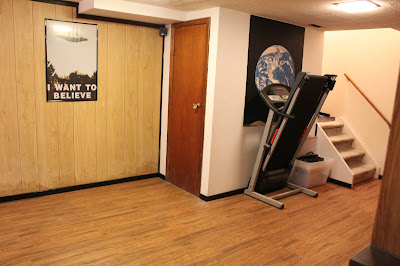 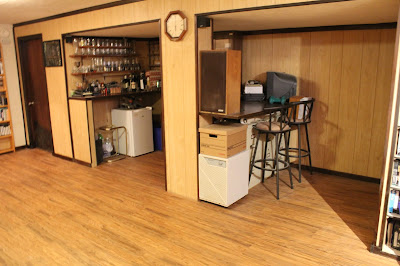