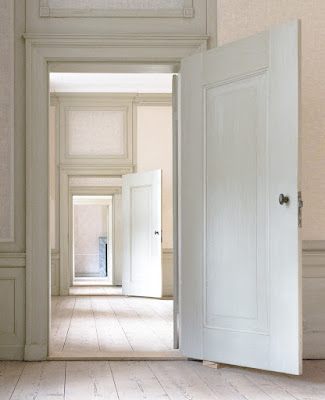 melalgia ~ pain in the limbs

Last year start out on a low note – we had to have one of our two remaining fur babies put down – and never really got much better. Who would have thought a mere virus could have changed the world so much? Well, who other than Stephen King (seriously, read The Stand )?

If you’re an introvert, like me, you’d think the idea of staying home would be pretty appealing, but there’s a big difference between staying home voluntarily and being told to stay home. Still, people learned to adapt. Some made great use of their time and others (like me) did not.

What started out as a two week extension of the March Break became a move to on-line learning for schools. People worked from home where they could and if they couldn’t they just stayed home. As the social distancing continued, our local beach was closed – by public demand –people wore masks when going out in public and stood in lines to shop for necessities.

Things began to open up again and people began to relax, only to have the numbers rise and things starting to shut down again. Still, there’s a light at the end of the tunnel. A couple of different vaccines have been developed and even now are being administered around the world. But the speed by which these vaccines passed through the testing stages have opened a whole other can of worms – should we or shouldn’t we trust them? I’m no scientist, so I’ll leave it to the experts to duke it out.

As I write this, we’re back in lock down again. Apparently people are just unable (or unwilling) to learn their lesson and follow the rules. I got to see my daughter and granddaughter at Christmas, so that’ll hold me for a while, but let’s hope the new year brings new hope for the end of the pandemic.

mantic ~ of, like or pertaining to divination; prophetic; divinely inspired

Last week I shared a few of my favourite humorous Christmas videos, this week I’m sharing a few of my more serious ones. Have a Merry Christmas everyone!


Emerson, Lake and Palmer - I Believe In Father Christmas


Faith Hill – Where Are you Christmas


Imperial March/Carol of the Bells

militaster ~ soldier without skill or ability

Well, the renovation has pretty much come to a standstill until the new year. Someone was supposed to come Friday to re-measure our counters but we never heard from them. The hubby has the new sink sitting in place and I gotta say, it looks pretty good – even without taps or counter.

It’s kind of frustrating that I can’t even really finish loading up the cupboards. The upper cabinets need the trim around the top and it’s better to do that with the cupboards empty, so anything I put in there will just have to come out again. And the lower cabinets on either side of the sink – well, the one on the left would only need to be unloaded again when the plumber needs to get at the pipes to hook up the sink, and the one on the right needs to be empty so the plumbing for the dishwasher can be snaked through it. And I have to wonder, if I’m going to have hoses going through there, is that going to interfere with the lazy susan on the bottom?

But meanwhile, we only have two Mondays until Christmas, so I would be remiss if I did not keep up with my holiday tradition of posting Christmas Carols for your listening pleasure. And in keeping with tradition, I’m starting out with a few of my favourite funny ones. So here they are, in no particular order.

All You Need Is Elves


I'm Climbing Up the Christmas Tree


Chipmunks Roasting on an Open Fire


I Am Santa Claus

I’m starting to think that this kitchen renovation is symbolic of 2020 – it’s just one thing after another.

Our new sink did not arrive before the guy came to measure for our counters, and apparently the printout of the specs taken from the website was not an adequate substitute for the real thing. When we received the email for the cost, it added that we’d have to either arrange to take the sink to their place of business for measuring, or have the guy come here again – at our expense. Oh, and the stone we want won’t be available until “early 2021.”

The design guy at Home Depot has been spectacularly unhelpful, and has started ducking our calls. For one thing, he told us we had to have the counters in before we could have the sink installed, however the counter people say the sink has to go in first because it’s an undermount. And we’re pretty sure there needs to be some kind of support in there too – which our current sink space does not have.

So, not only do we have to find an electrician to recess the wiring for the stove and create an outlet for the microwave, we also need to find a contractor to come in to build the support for the sink, and a plumber to hook up the sink and dishwasher. Which, seeing as it appears that everyone’s pandemic pastime seems to be renovating, is going to be a quest and a half.

But a little bit of good news, we finally got the cupboard doors back from the glass people: 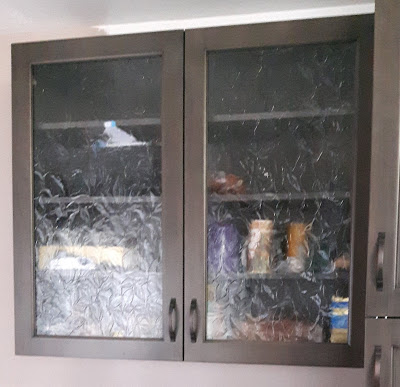 The picture doesn’t really do it justice. Have you ever tried to photograph glass? That’s a leaf design in it, in case you were wondering.

And the hubby has finished the flooring in the kitchen: 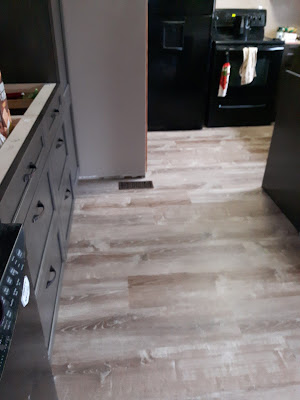 I’m starting to refill the bookcases in the dining room that I had to empty so they could be moved for the flooring to be installed, but it’s slow going. The hubby had to patch a few holes in the kitchen walls, so that meant drywall dust. I’ve cleaned the bookcases, but everything going back in them has to be cleaned too. It’s a thankless task, I tell you what.

But at the same time I’m also weeding out a few things – knick knacks mostly – for the ever growing donation pile. I’m being cautious when it comes to filling the kitchen cupboards though because the contractor will be back in the new year when the wider trim comes in, and apparently the cupboards need to be empty for him to put it up.

So . . . in case you haven’t figured it out, there will be no Christmas baking this year. Even if by some miracle I have a working sink, I still won’t have counters. No counters mean no cookies - no place to put them to cool, no place to roll them out.

I wonder how many different kinds of fudge I can make?