A few weeks ago I posted a picture I’d taken last year of one of the neighbourhood foxes and lamented about not seeing the foxes much anymore. Well, I may not see them in our backyard, but that doesn’t mean they’re not still in the neighbourhood.

One evening around suppertime, I saw this little guy and his mother just up the crescent: 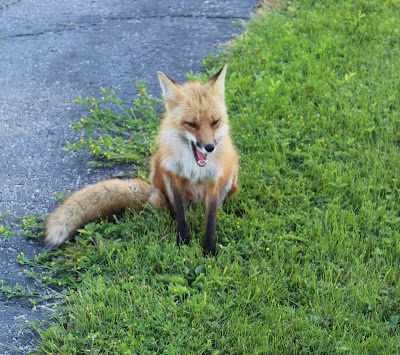 His mother disappeared into a culvert as soon as she saw me coming, but this little guy stayed around to have a chat. They make the weirdest noises! He actually posed for several pictures before getting bored. He trotted up the driveway he was sitting on and disappeared into a back yard.

I think the people in that house are putting food out for them – and if they are it’s a very misguided kindness. While I appreciate being able to get close enough to almost touch him, not everyone looks on the foxes kindly. It’s never a good idea for wildlife to become too trusting of humans.

That being said, I would totally put food out for the wildlife if I lived further out in the country where people are fewer and further between. :-)

It’s kind of ironic that I’ve always lived right on the edge of town but it’s only been since the area’s started to build up that we’re seeing more wildlife. We never saw foxes or coyotes when I was a kid and we had woods and fields all around us. We didn’t even have raccoons or rabbits raiding my mother’s substantial garden (more than half an acre).

Now there’s only one small patch of woods that’s being protected, and the fields have been ploughed under for subdivisions.

In other news . . . I freaked myself out yesterday when I thought I’d lost the bookmarks icon off my browser’s menu bar. I’d bookmarked a couple of my favourite “match 3” games so I wouldn’t have to keep scrolling through the entire page, and next thing I knew my bookmarks were missing from the menu bar. I could add bookmarks, I just couldn’t access my bookmark list.

The ones I have sitting on the menu bar, the ones I use most frequently, were still there, but the rest of them were gone. And worse, I had no idea how to get them back. I cautiously checked a couple of settings in my browser but didn’t want to make things worse. Then I just happened to notice a folder where there wasn’t a folder before.

I don’t know what I clicked on or how I did it, but somehow I moved my bookmarks folder from the right side of the menu bar to the left.

Man, I tell you. Some days it just isn’t worth chewing through the restraints!

Well, I don’t know how things are going where you are, but in my neck of the woods things are cautiously starting to open up again. In fact, we’ve even had a few visits from the grandbaby. Guess who the first one into the pool was this year? 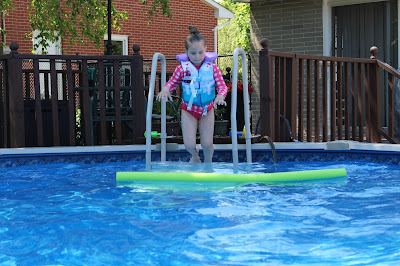 FYI The temperature of the water was only 76F. :-)

The circumstances of our visits weren’t the best, however. My son-in-law’s mother was very sick and Thursday night she passed away. No, it wasn’t from COVID-19, it was cancer. The really sad part was that she was in a seniors residence which meant she was on lock-down and the S-I-L was unable to help her out or even visit her for the last several weeks.

As I said, we’ve had a couple of visits with the grandbaby while her parents were off doing the things that needed to be done. She’s cuter than ever – still has a band of imaginary friends and she’s even smarter than she was three months ago. She’s colouring inside the lines now and had no trouble figuring out how our new fan worked. LOL

I finally got the rest of the plants for my garden and everything is doing well. I think I’m going to have to try my hand at pickling beets this year – I’m going to have a bumper crop. I’ve heard you can pickle string beans too, which might be interesting. Of course I’ll have to find the wherewithal to do so first.

I finally broke down and turned on the central air yesterday. It’s not that I have anything against being cool, it’s just I hate having to close all the windows. But when I was starting to feel overheated by mid-morning and I wasn’t even being all that active, it was time to turn on the A/C.

We’ve never had central air before, but it was part of the new furnace we had installed in January. It wasn’t hard to figure out how to flip it from heat to cold, but it did take some adjusting to find the right temperature.

When we used the window unit in the dining room we had it set it for about 68F. With the furnace I started out at 70F, and then inched it up to about 75F. I like it cool, but not too cold. I think the problem is that it’s a little warmer in the hallway where the thermostat is than the rest of the house.

Oh, well. I’m sure I’ll get it right eventually.

I don’t know about the weather where you are, but here in Southern Ontario it’s been up and down like a yo-yo. In the space of a couple of days we from “should I wear a winter coat or a spring coat” to “how little clothing can I legally get away with,” and as soon as I changed my closet over to summer clothes it got cool again. Every day’s a new adventure – warm or cold? windy or calm? dry or drizzly?

I did get my vegetable garden planted, and for the first couple of weeks it looked like this:

Then we got a whole day and night of steady rain and suddenly it looked like this: 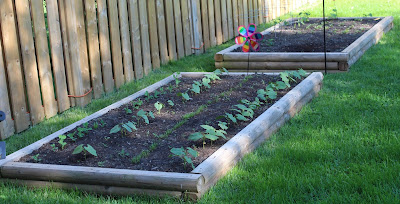 Okay, this picture was taken like a week later, but you could almost see the seeds spouting in the rain. It was crazy.

For those of you curious about such things, the garden in the front has green beans, carrots, yellow beans, and peas. The garden at the back has the tomatoes my neighbour started for me (and who are NOT happy to be outside), beets, and pumpkins. I still haven’t found any pepper plants so there’s also a bare patch in there.

We were very happy that most of the plants in the pond garden came back up this year, and the plants along the back fence. 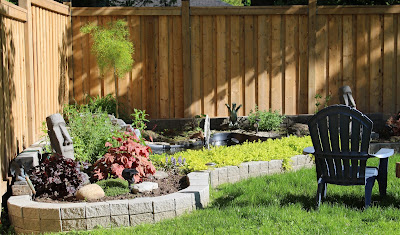 And we have a new addition to Kelsey Park: 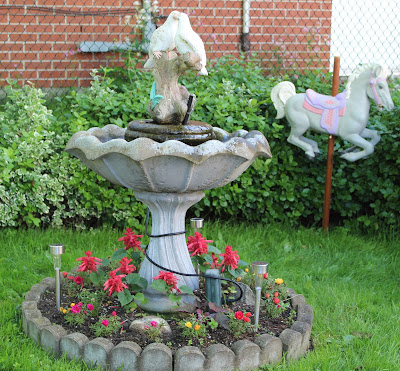 Years ago I painted this horse for my father-in-law for the cottage, and when they sold the cottage it came back to me. The colours were not my choice and I fully intend to re-paint it when we bring it back in, but that will be a project for the winter.