I have a problem. I currently have four orchids. Two are tucked away on a stand next to the deck doors in the dining room, and two are on the window ledge of the kitchen. All four get pretty much the same exposure to the sun.

One of the two orchids in the kitchen is really too big for the window ledge, but I’m afraid to move it. I once had a beautiful cattleya orchid that I grew from a seedling. It took seven years for it to bloom, but the single blossom it produced was magnificent. It, too, started out on the window ledge of the kitchen, and when it became too big I moved it to a counter that was further back, but it seemed happy enough.

Unfortunately, I failed to take into account that the new space was across from the air conditioner in the dining room window and it did not like the cold air at all. I tried moving it back to the window but it was too late and I lost the orchid.

The bigger of the two orchids currently on my window ledge seems to be of sturdier stock. It’s bloomed a few times and last time it did so the bloom stalk had eleven blossoms on it. Normally once the blossoms fall off I’d trim back the stem to allow for new growth, but on the advice of my neighbour this time I left it alone.

Much to my surprise, it did get a new shoot off the original bloom stalk, which I promptly accidentally knocked off. Then it got another one, which I accidentally broke off while trying to tie it to a stick to make it a little more upright. When it got a third one, I left it alone, despite the fact that it the leaves are on one side of the plant and the bloom stalk is sticking out the other side. And then it hedged its bet by producing a second bloom stalk to stick out a third side of the pot. 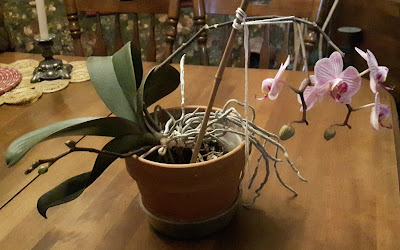 Now my problem is this. There’s only so much room on my window sill and the leaves of the orchid are touching the cold glass. I don’t much like the arrangement, but it’s the only way to position it to minimize the possibility of knocking off one of the bloom stalks. 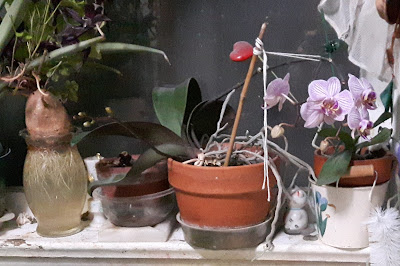 The blooms will keep going for weeks, provided nothing touches them, but both stalks stick out slightly over the sink. I could make room for the plant on the stand in the dining room - it won’t be easy but it’s do-able - but I’m afraid if I move it it’ll die, just like my cattleya orchid did. Plus it’s right beside the cat tree and I know at least one of my cats will try to snack on it.