Belle of the Ball

A man’s daughter is his heart. Just with feet, walking out in the world.
— Mat Johnson

Being a daddy’s girl is like having permanent armor for the rest of your life.
— Marinela Reka

A good father will leave his imprint on his daughter for the rest of her life.
— Dr. James Dobson

Given the title of this post, I planned to use quotes about being the belle of the ball. However, I couldn’t find any. Apparently, there’s a book by that title and there were lots of quotes from it. There was also a poem that used the phrase. I could find quotes about balls in general (ie. golf balls, baseballs, etc.) and ballroom dancing, none of which really fit. So then I tried father/daughter balls and eventually settled on quotes about fathers and daughters.

The saga of the dress my granddaughter wore to the 2022 Father Daughter Butterfly Ball, actually began a couple of years ago. The daughter bought the tickets to the 2020 ball as a Christmas present. I immediately went to the fabric store to look at patterns, but I didn’t see any that looked ball worthy, so I went online and ordered one.

I didn’t even get a chance to start looking at material before we went on lockdown, and the ball was postponed. For two years. But finally the ban was lifted and it was time to get to work.

I live in a small town and there is no proper fabric store. There’s a place that carries a small selection for quilters, but that’s about it. So off to the city I went to the fabric store for material. But because there hadn’t been any social gatherings for the past two years, there wasn’t much to choose from. So I went to a different city. Then a third (we’re kind of equidistant to them – north, west, and east).

The third fabric store had a better selection than the others, and their fancier material was on sale. I came away with 5 metres of a pale blue organza, and 5 metres of a light blue lace. I wasn’t sure which would look better, but I was leaning towards the lace, although that would mean adjusting the pattern. Unfortunately, this store didn’t have any lining material, but I came away with something I thought could do in a pinch.

Time passed. I decided to go with the organza, but I didn’t like the lining I had, so this required more trips to more fabric stores. Next challenge? I’d bought the pattern a couple of years ago and my granddaughter had grown since then. So the pattern had to be adjusted.

My first try making the bodice didn’t work – I tried it on the granddaughter and it didn’t fit. Fortunately, I had just enough material left to re-make it. This one was perfect. Then, when it was time to attach the lining, I realized I’d made an error. Instead of cutting the lining from the same pattern as the skirt, I cut it using the pattern for the slip.

There was supposed to be netting under the skirt to poof it out more, but I decided not to do that because the organza was already poofy enough. What I didn’t realize, is that the netting was sewn onto the slip so it was sandwiched between the skirt lining and the slip. *sigh*

I did not have enough lining material to redo this, nor did I have time to go back to one of the fabric stores for more. What I was able to do was add some material in, which actually worked better.

The daughter reminded me that she had my old machine, so she dropped it off (because she didn’t know one foot from another) and while there wasn’t an invisible zipper foot, there was a regular one, which would do in a pinch. Then a trip to Walmart to get more thread revealed they sold plastic, snap together, invisible zipper feet. I was back in business.

It’s been a long time since I’ve done an invisible zipper, but I remembered they can be a little tricky. So I did a Google search and found some step by step instructions. It was so much easier that I thought, and I can’t understand why I haven’t been doing all my zippers that way.

The dress was done, with a couple of days to spare. I did a pretty good job, if I do say so myself. And the granddaughter was certainly the belle of the ball. 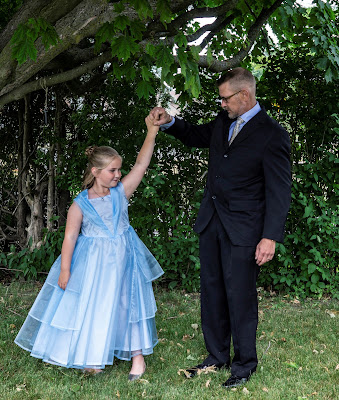 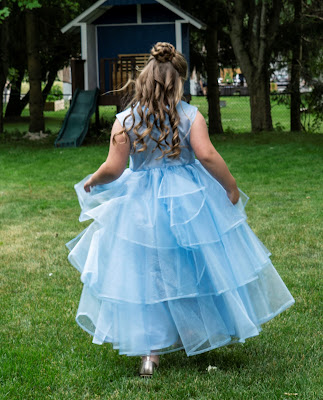 Now I just have to figure out what I’m going to do with five metres of light blue lace.