One of the pitfalls of having central air conditioning . . . it’s grey and dismal outside, and it’s nice and cool inside, so it’s easy to assume that it’s cool outside. So when you set foot out the front door the humidity hits you like a fist in the gut.

And here’s something new . . . I was sitting in my office yesterday and thought I smelled smoke. It was a little early, but probably one of the neighbours was burning garden detritus. But no, it was not. It was hazy all day and I later learned the haze was smoke from the fires in northern Ontario. Seriously?

It kind of boggles the mind that we could be so divided, weather-wise. The west (and apparently the north) is on fire and here in the southeast we’re drowning. We’ve had so much rain the hubby has had to take water out of both the pond and the pool a couple of times.

But while I might not be enjoying all this wet weather, the gardens sure have. Every gardener I know is amazed at how well their gardens are doing – how prolific the blossoms, how big and bushy the vegetables. This is the snow pea fence, the snow peas my neighbour plants along the fence so we can pick what comes through on our side. 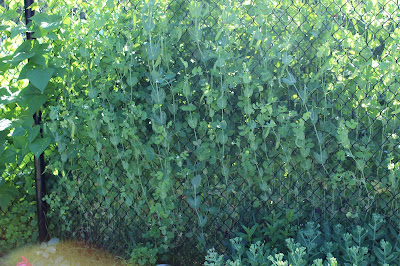 The picture was taken last week, and already the snow peas are done. Because of the rain I wasn’t able to get out and pick them, and now they’re too big. All we can do is let them go to seed for next year.

This picture of my vegetable garden was taken last week as well. 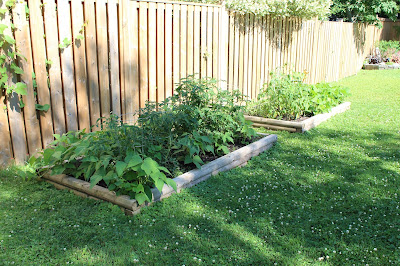 Everything is even bigger now and I’ve already picked enough beans to last us a couple of weeks. Not only are the tomato plants covered in blossoms, I’ve got tomatoes forming. Who knew my neighbour (who generously planted the garden for me while I was in the hospital) gave me roma tomatoes as well as several other kinds? And tucked under the tomato plants are peppers, with actual peppers on them!

The valiant little cherry tomatoes the hubby likes to plant on the deck are starting to show fruit as well. 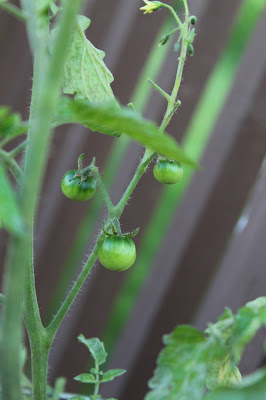 So if nothing else, we’ll be eating well on beans, peas (the kind you shell that are also growing on the fence), tomatoes, and peppers. That is provided I don’t mind harvesting in the rain.

How is your garden growing?

Email ThisBlogThis!Share to TwitterShare to FacebookShare to Pinterest
Labels: rain, update, weather, what I've been up to