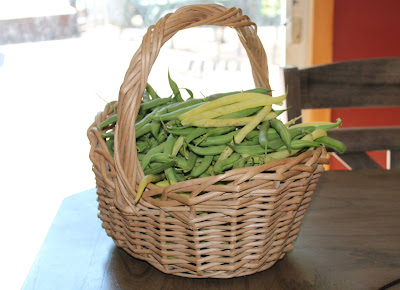 Holy moly, just what kind of super beans did my neighbor plant in my garden? The picture above is the fourth time I’ve picked beans and they’re still coming. In fact, the plants are still blossoming. And the beans growing through the chain link fence are just starting. You can’t just let them go to waste, right? It won’t be long before I’m buried in beans!

We’ve been having them steamed with dinner several times a week, but I gotta say I’m starting to lose my affection for them. I don’t care for beans that have been frozen and I’m running out of people to palm them off on give them to. Anyone ever try pickling beans before?

While I still greatly appreciate my neighbor planting my vegetable garden, I should have paid more attention to what she was doing. Because of the over-abundance of beans last year I’d planned on scaling them back to just one row – I’ve got three rows out there this year. No wonder I’m overwhelmed with beans.

And let’s talk tomatoes. I like tomatoes…cooked in stuff. The hubby likes cherry tomatoes in his salad. Me? Not so much. I like big tomatoes that can be sliced for sandwiches or used in spaghetti sauce, which is why we normally just have a few cherry tomato plants on the deck.

So imagine my surprise when I discovered that the tomato plants in the first of my two gardens, the plants that have grown almost as tall as me, turned out to be cherry and grape tomatoes. And the plants are covered with little green tomatoes. The stalks are weighted down with them. Anyone know what else you can do with cherry tomatoes besides put them in a salad?

Next year I’ll be able to take control of my vegetable gardens again and you can bet I’ll be doing some careful planning over the winter. That’s half the fun, isn’t it?

Meanwhile, if anyone has any recipes that use both string beans and cherry tomatoes, please send them to me! 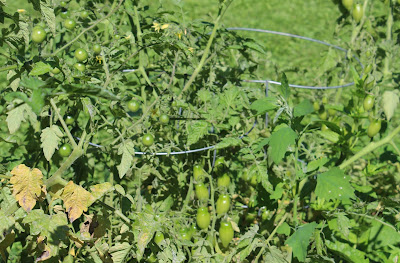 Email ThisBlogThis!Share to TwitterShare to FacebookShare to Pinterest
Labels: overabundance, vegetable garden, what I've been up to

stopping by to say hi — i know it’s been a while!

i have a great recipe for cherry tomatoes — BLT bites
they’re yummy! i bring them to parties and they get gobbled up
i think i have the recipe on my blog somewhere... or you can email me

Nice to hear from you Tara! I do check out your blog every once in awhile, I just haven't made any comments. I'll be sure to check it for that recipe though. :-D