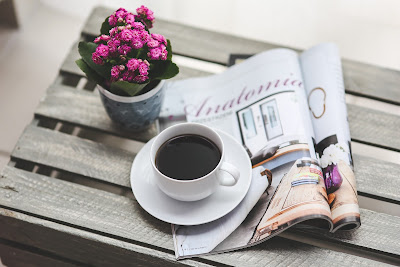 Magazines all too frequently lead to books and should be regarded by the prudent as the heavy petting of literature.
— Fran Lebowitz

A magazine or a newspaper is a shop. Each is an experiment and represents a new focus, a new ratio between commerce and intellect. — John Jay Chapman

I started thinking about magazines recently and it was a real trip down memory lane.

When I was a kid, I have a vague recollection of my mother picking up the occasional women’s magazine, like Family Circle, Woman’s Day, and Good Housekeeping. When I was a young teen I’d read about my favorite pop stars in magazines like Tiger Beat, and Teen Beat, and Sixteen Magazine.

My favorite magazine over all at that time, which you could only subscribe to through school, was one called Co-Ed Magazine. It was filled with wonderful articles, not glossy pictures. It also featured at least one or two fictional stories, which was another big selling point for me.

In my later teens I subscribed to Isaac Asimov’s Science Fiction Magazine, which I believe is still around today. It’s a digest sized magazine filled with stories. I used to dream about being the youngest person to be published by IASFM, but I knew very little about writing back then, so I also subscribed to Writer’s Digest.

I remember picking up the occasional glossy fashion magazine like Vogue, or Harper’s Bazaar. I rarely found anything worth reading in them, for me it was all about the fashion. I couldn’t afford to follow the fashion trends, but I could sure look at them in the magazines.

Magazines are an amazing thing. They come in all shapes and sizes, from glossy fashion magazines to digest sized periodicals that are easy to carry with you. They inform, they entertain, and they can open up the world to you. In today’s electronic world I’m actually surprised to see so many of them still on the shelves.

What started me thinking about this is that I couldn’t help but notice a special issue of National Geographic, the king of magazines, on the stands recently. It concerned ancient cities, which has always been an interest of mine (the hubby’s too). I was very tempted to get it, but the price put me off. I mentioned it to the hubby and he said I should go ahead and buy it, so I did. And then I told him a subscription to National Geographic would make a good Christmas present.

I used to get magazines passed down to me from an aunt – Chatelaine, Better Homes and Gardens, Country Living – and I’d go through them and merrily cut them up. I have file folders full of pictures I’ve cut from magazines, all neatly organized of course, to inspire me in my writing. I rarely consult them, mind you, but they’re there. I have fewer folders of articles I’ve found interesting enough to save, and of course I have a few folders of recipes that I have given up trying to keep organized.

The only glossy magazine that was safe from my scissors was National Geographic. My uncle subscribed to it, and he’d pass his old issues on to me. There was so much information in them that it was like having a set of reference books, and I certainly wouldn’t cut up reference books. However, sometimes I’d find National Geographics at a church book sale, and if they were duplicates of ones I had, then I felt free to cut away.

I buy two magazines on a regular basis when I grocery shop, First For Women, that comes out every two or three weeks, and Woman’s World, that comes out weekly. The first one I get for the recipes mostly, and the second features a short, romantic story as well as a mini mystery. And let’s not forget the horoscopes. ;-)

My only subscription at this time is to Fairy Magazine, which comes out quarterly and is now called Enchanted Living. It’s another magazine that’s safe from my scissors, although I’m running out of shelf space for the back issues.

Do you subscribe to any magazines? Buy them when you grocery shop? Inquiring minds want to know. . .

Email ThisBlogThis!Share to TwitterShare to FacebookShare to Pinterest
Labels: good old days, magazines, nostalgia, weekly update, what I've been up to

Monday:
What I'm up to/planning to do
Wednesday
Non-fiction series